Who is Spartacus – Hero or Barbarian? 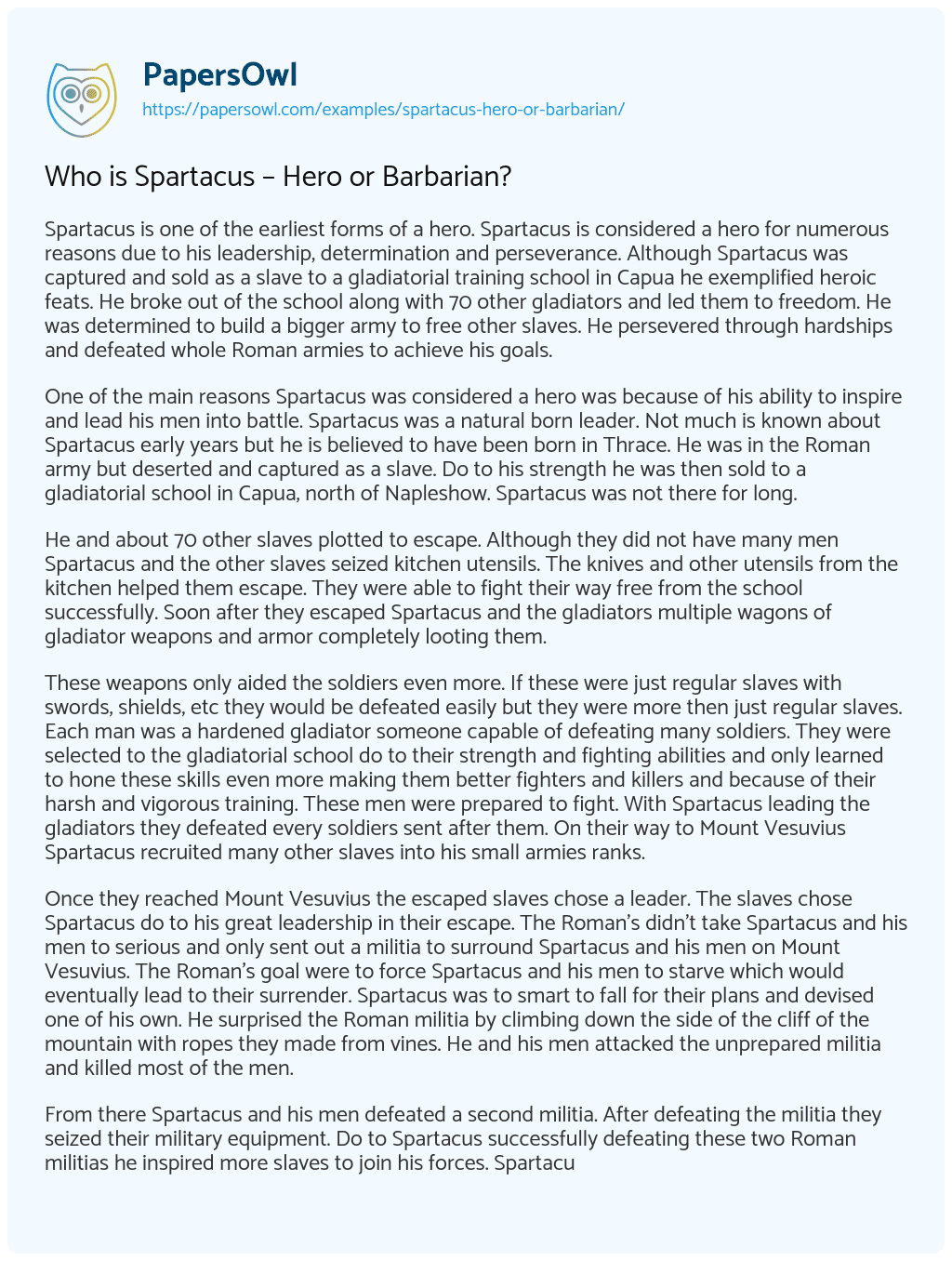 Spartacus is one of the earliest forms of a hero. Spartacus is considered a hero for numerous reasons due to his leadership, determination and perseverance. Although Spartacus was captured and sold as a slave to a gladiatorial training school in Capua he exemplified heroic feats. He broke out of the school along with 70 other gladiators and led them to freedom. He was determined to build a bigger army to free other slaves. He persevered through hardships and defeated whole Roman armies to achieve his goals.

One of the main reasons Spartacus was considered a hero was because of his ability to inspire and lead his men into battle. Spartacus was a natural born leader. Not much is known about Spartacus early years but he is believed to have been born in Thrace. He was in the Roman army but deserted and captured as a slave. Do to his strength he was then sold to a gladiatorial school in Capua, north of Napleshow. Spartacus was not there for long.

He and about 70 other slaves plotted to escape. Although they did not have many men Spartacus and the other slaves seized kitchen utensils. The knives and other utensils from the kitchen helped them escape. They were able to fight their way free from the school successfully. Soon after they escaped Spartacus and the gladiators multiple wagons of gladiator weapons and armor completely looting them.

These weapons only aided the soldiers even more. If these were just regular slaves with swords, shields, etc they would be defeated easily but they were more then just regular slaves. Each man was a hardened gladiator someone capable of defeating many soldiers. They were selected to the gladiatorial school do to their strength and fighting abilities and only learned to hone these skills even more making them better fighters and killers and because of their harsh and vigorous training. These men were prepared to fight. With Spartacus leading the gladiators they defeated every soldiers sent after them. On their way to Mount Vesuvius Spartacus recruited many other slaves into his small armies ranks.

From there Spartacus and his men defeated a second militia. After defeating the militia they seized their military equipment. Do to Spartacus successfully defeating these two Roman militias he inspired more slaves to join his forces. Spartacus’s heroic feats not only inspired slaves to join but also inspired many herdsmen and shepherds who were near by to join. Eventually Spartacus was able to build a army 90,000 strong. Having all of these men did not phase Spartacus. He was more then capable of leading an army of this stature. He was able to lead these men because he was an excellent tactician, leader, fighter, warrior and general. What also allowed Spartacus to lead these slaves, gladiators, shepherds and herdsmen was the fact that he was able to relate to them. Men being led by Roman generals were being led by generals who were wealthy and most likely didn’t face the hardships some of their soldiers did. While on the other hand Spartacus was just as poor as the poorest man in his army and just as willing as the next man. He faced just as many hardships as everyone else and this is why he is able to lead all of these men. The men feel inspired to fight for Spartacus because they all have the same goal in mind, freedom.

Spartacus’s determination was another one of his heroic traits. Spartacus was determined to lead his army to freedom. He was focused on that goal and did every thing possible to achieve it. With the men he acquired Spartacus fought small Roman armies. Spartacus and his men defeated the few armies they faced but realized something that was holding them back. The men who previously joined were inexperienced fighters and lacked the proper weapons. The inexperienced men defeated the armies they faced before by using only local materials and weapons and unusual fighting tactics.

With this knowledge Spartacus accessed the situation and came up with a solution like any good leader would. He decided he would train the men along with the help of the other gladiators in his army and spent the winter of 73–72 BC training them. Then he armed the men and new recruits with proper weapons and supplies by expanding the raiding territory. Nola, Nuceria, Thurii and Metapontum. The town’s were raided by the Spartacus’s army splitting up which were lead by Spartacus him self and his right hand man Crixus. Although raiding towns may not sound so heroic these towns were all controlled by the Romans and allowed Spartacus and his men to get the materials they required. Just like a hero will steal from the rich to give to the poor. For example Robin Hood a vigilante/ hero who gave to the poor by stealing from the rich.

This is where Spartacus’s third heroic trait comes in, perseverance. Even though Spartacus suffered such a huge loss he persevered through it and continued to fight. The Roman’s were surprised by Spartacus continuing to defeat their forces. The Senate in Rome decided to put Marcus Licinius Crassus in charge of ending the rebellion by Spartacus with 8 legions totaling 40,000 men. Crassus was also the wealthiest man in Rome. He treated his soldiers with harsh and brutal discipline. He even used decimation to discipline his troops for their mistakes.

Spartacus legacy never died though. He is remembered as one of the greatest hero’s in history. Many people have been called Spartacus do to their actions. For example, Toussaint Louverture. Toussaint lead a slave revolt for the independence of Haiti. Toussaint was called the “Black Spartacus” for his actions.

In all of these examples I have stated whether it is a movie, television series, book, or video game Spartacus is portrayed as a hero. Spartacus is portrayed as a hero who fought for almost 100,000 men and their freedom. He is shown or detailed as a brave man who was a great leader, determined to reach his goals and persevered through his obstacles to reach those goals. Even though Spartacus and almost all his men died loosing their battle for freedom they still succeeded in fighting for their goal and never looking back. Why do you think Spartacus is remembered through history as one of the greatest heroes who ever lived and not someone who is to be forgotten in the past. Not because he and many other men died but because he and those men died for a cause. They died fighting for their freedom.

Who is Spartacus – Hero or Barbarian?. (2019, Jan 30). Retrieved from https://papersowl.com/examples/spartacus-hero-or-barbarian/

Spartacus, a Slave who Led a Revolt

Saladin: Story of a Hero