Sense of Inferiority in the Glass Menagrie 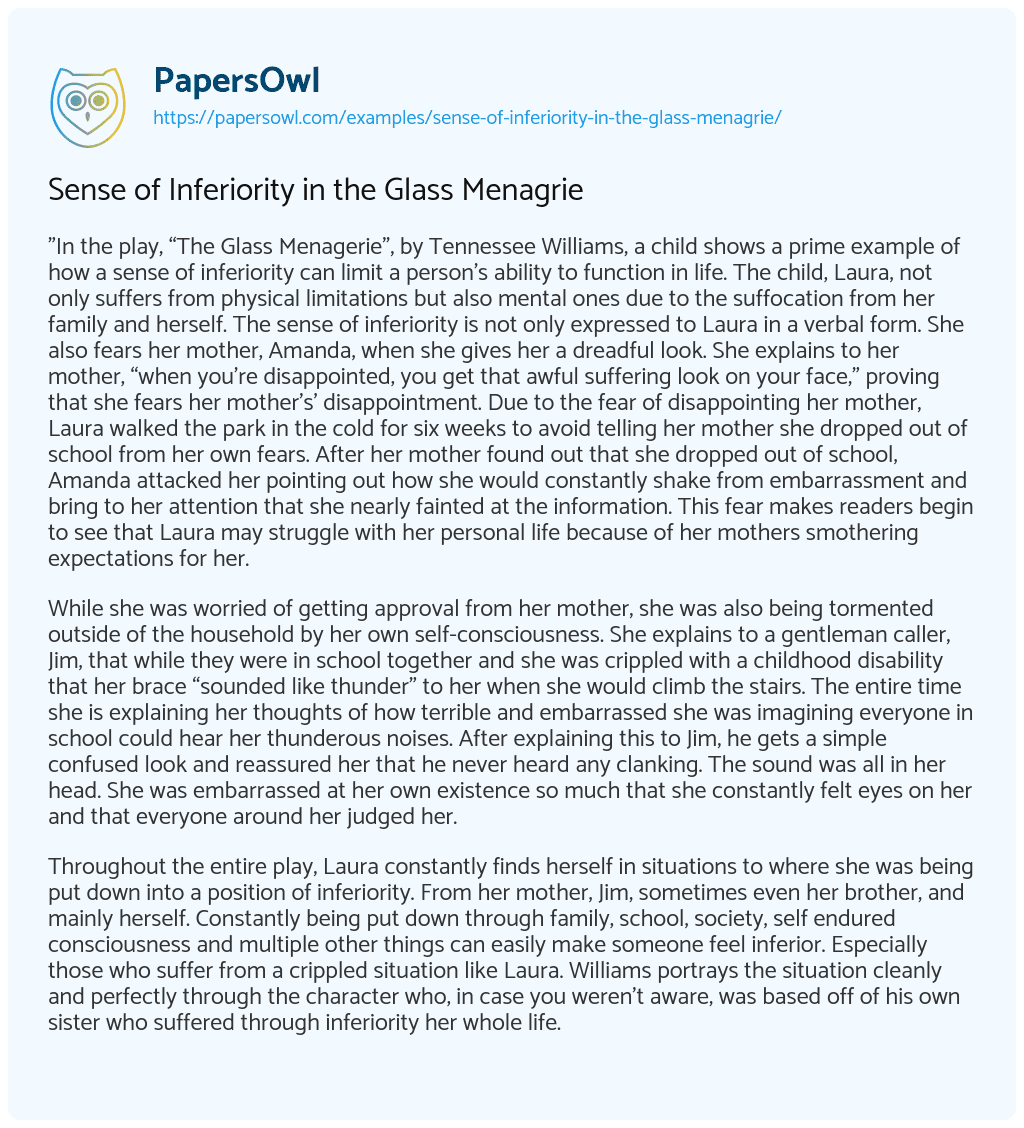 “In the play, “The Glass Menagerie”, by Tennessee Williams, a child shows a prime example of how a sense of inferiority can limit a person’s ability to function in life. The child, Laura, not only suffers from physical limitations but also mental ones due to the suffocation from her family and herself. The sense of inferiority is not only expressed to Laura in a verbal form. She also fears her mother, Amanda, when she gives her a dreadful look. She explains to her mother, “when you’re disappointed, you get that awful suffering look on your face,” proving that she fears her mother’s’ disappointment. Due to the fear of disappointing her mother, Laura walked the park in the cold for six weeks to avoid telling her mother she dropped out of school from her own fears. After her mother found out that she dropped out of school, Amanda attacked her pointing out how she would constantly shake from embarrassment and bring to her attention that she nearly fainted at the information. This fear makes readers begin to see that Laura may struggle with her personal life because of her mothers smothering expectations for her.

While she was worried of getting approval from her mother, she was also being tormented outside of the household by her own self-consciousness. She explains to a gentleman caller, Jim, that while they were in school together and she was crippled with a childhood disability that her brace “sounded like thunder” to her when she would climb the stairs. The entire time she is explaining her thoughts of how terrible and embarrassed she was imagining everyone in school could hear her thunderous noises. After explaining this to Jim, he gets a simple confused look and reassured her that he never heard any clanking. The sound was all in her head. She was embarrassed at her own existence so much that she constantly felt eyes on her and that everyone around her judged her.

Throughout the entire play, Laura constantly finds herself in situations to where she was being put down into a position of inferiority. From her mother, Jim, sometimes even her brother, and mainly herself. Constantly being put down through family, school, society, self endured consciousness and multiple other things can easily make someone feel inferior. Especially those who suffer from a crippled situation like Laura. Williams portrays the situation cleanly and perfectly through the character who, in case you weren’t aware, was based off of his own sister who suffered through inferiority her whole life.

Sense of Inferiority in the Glass Menagrie. (2021, May 24). Retrieved from https://papersowl.com/examples/sense-of-inferiority-in-the-glass-menagrie/

Imitation and Action in “The Glass Menagerie”