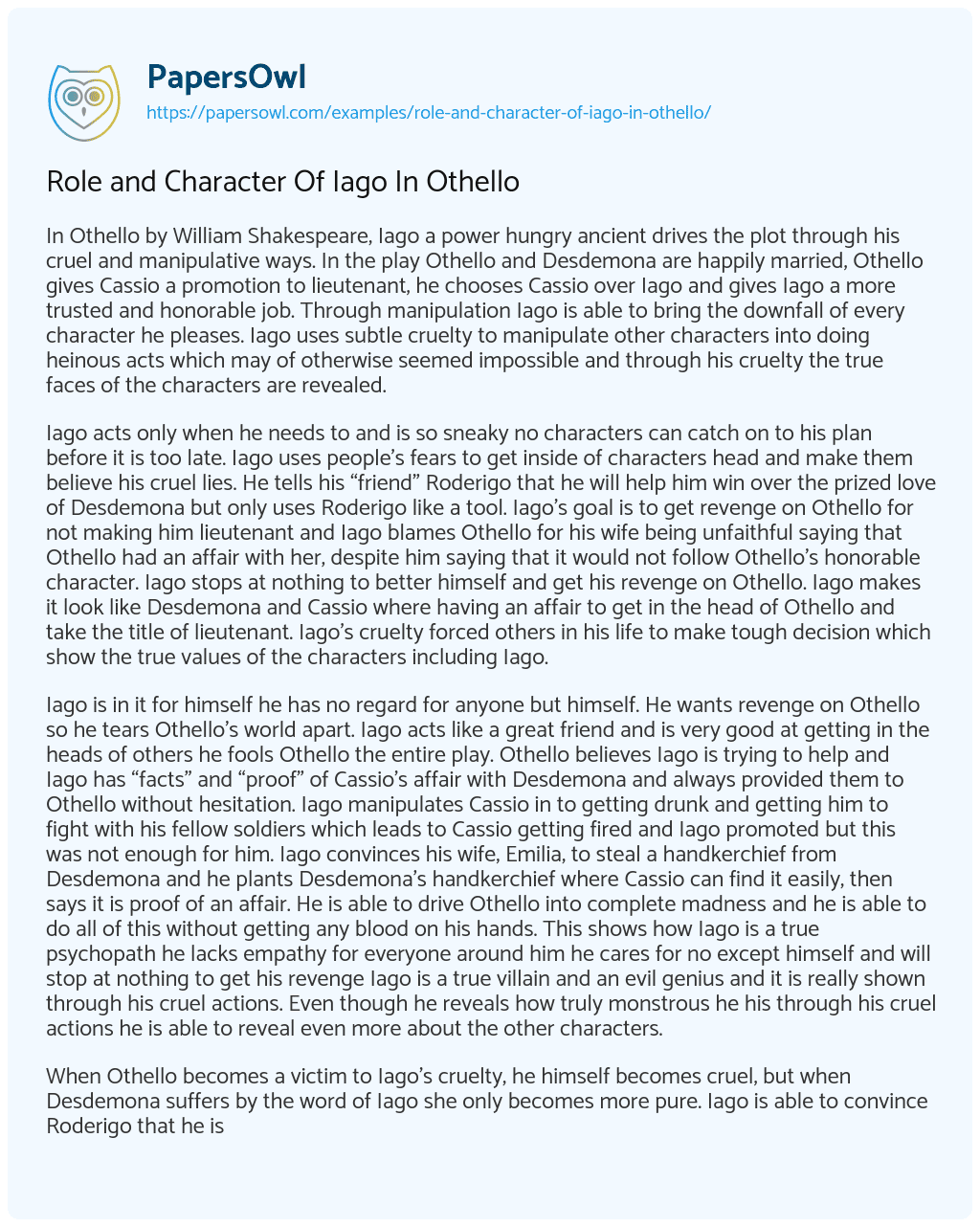 In Othello by William Shakespeare, Iago a power hungry ancient drives the plot through his cruel and manipulative ways. In the play Othello and Desdemona are happily married, Othello gives Cassio a promotion to lieutenant, he chooses Cassio over Iago and gives Iago a more trusted and honorable job. Through manipulation Iago is able to bring the downfall of every character he pleases. Iago uses subtle cruelty to manipulate other characters into doing heinous acts which may of otherwise seemed impossible and through his cruelty the true faces of the characters are revealed.

Iago acts only when he needs to and is so sneaky no characters can catch on to his plan before it is too late. Iago uses people’s fears to get inside of characters head and make them believe his cruel lies. He tells his “friend” Roderigo that he will help him win over the prized love of Desdemona but only uses Roderigo like a tool. Iago’s goal is to get revenge on Othello for not making him lieutenant and Iago blames Othello for his wife being unfaithful saying that Othello had an affair with her, despite him saying that it would not follow Othello’s honorable character. Iago stops at nothing to better himself and get his revenge on Othello. Iago makes it look like Desdemona and Cassio where having an affair to get in the head of Othello and take the title of lieutenant. Iago’s cruelty forced others in his life to make tough decision which show the true values of the characters including Iago.

Iago is in it for himself he has no regard for anyone but himself. He wants revenge on Othello so he tears Othello’s world apart. Iago acts like a great friend and is very good at getting in the heads of others he fools Othello the entire play. Othello believes Iago is trying to help and Iago has “facts” and “proof” of Cassio’s affair with Desdemona and always provided them to Othello without hesitation. Iago manipulates Cassio in to getting drunk and getting him to fight with his fellow soldiers which leads to Cassio getting fired and Iago promoted but this was not enough for him. Iago convinces his wife, Emilia, to steal a handkerchief from Desdemona and he plants Desdemona’s handkerchief where Cassio can find it easily, then says it is proof of an affair. He is able to drive Othello into complete madness and he is able to do all of this without getting any blood on his hands. This shows how Iago is a true psychopath he lacks empathy for everyone around him he cares for no except himself and will stop at nothing to get his revenge Iago is a true villain and an evil genius and it is really shown through his cruel actions. Even though he reveals how truly monstrous he his through his cruel actions he is able to reveal even more about the other characters.

When Othello becomes a victim to Iago’s cruelty, he himself becomes cruel, but when Desdemona suffers by the word of Iago she only becomes more pure. Iago is able to convince Roderigo that he is helping him win over Desdemona but during this it is clear that Roderigo is also capable of being cruel. When word gets out about Cassio’s and Desdemona’s “affair” Roderigo become fueled by jealousy and hatred so much so that when Iago suggest that Cassio be killed Roderigo agrees to do it. Iago is the mastermind behind all of the cruel thoughts and ideas of the play but he doesn’t make anyone commit the crimes they do it all themselves so no matter how manipulated they are it is still their fault, they had the cruelty in them to do it. Othello would have never committed the acts without Iago’s cruel suggestions but the fact that Othello did kill her shows he had it in him the entire time. But throughout all of this despite the cruel words of Iago ruining her life she remains pure she never once blames Othello for his action she always blames herself and remains faithful to Othello.

Iago’s cruelty is the cause of every one’s downfall Othello kills his wife, Iago kills Roderigo and and his own wife Emilia and Othello kills the man who killed his wife, being himself, all because of Iago cruel actions. Iago cruelty shows more about the victims than it does about him. Desdemona was affected by the same cruelty as most other characters but stayed true to her beliefs while the others also became cruel. It shows that the characters where already cruel they just chose not to let it define them.

Role and Character Of Iago In Othello. (2019, Jul 31). Retrieved from https://papersowl.com/examples/role-and-character-of-iago-in-othello/