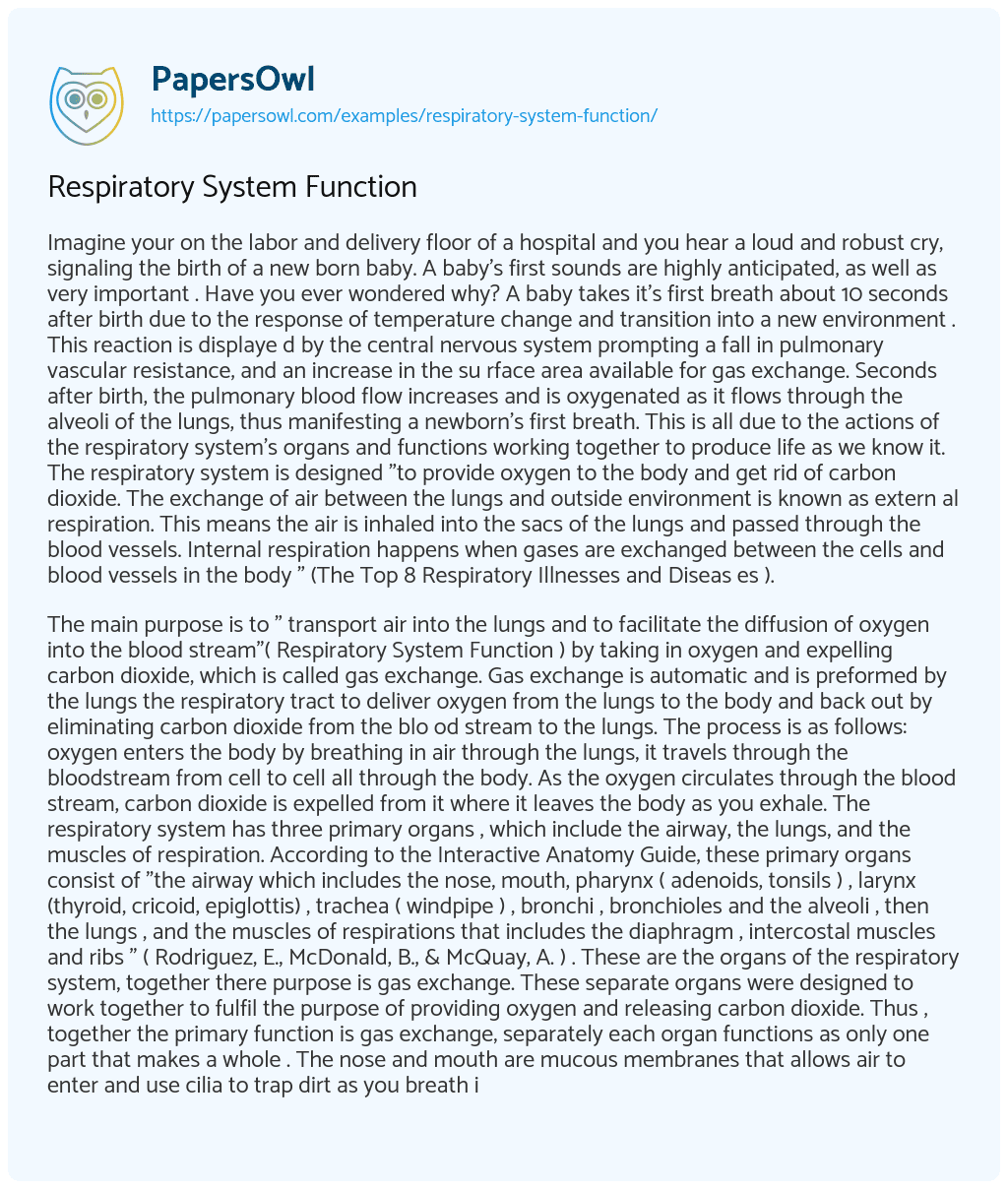 Imagine your on the labor and delivery floor of a hospital and you hear a loud and robust cry, signaling the birth of a new born baby. A baby’s first sounds are highly anticipated, as well as very important . Have you ever wondered why? A baby takes it’s first breath about 10 seconds after birth due to the response of temperature change and transition into a new environment . This reaction is displaye d by the central nervous system prompting a fall in pulmonary vascular resistance, and an increase in the su rface area available for gas exchange. Seconds after birth, the pulmonary blood flow increases and is oxygenated as it flows through the alveoli of the lungs, thus manifesting a newborn’s first breath. This is all due to the actions of the respiratory system’s organs and functions working together to produce life as we know it. The respiratory system is designed “to provide oxygen to the body and get rid of carbon dioxide. The exchange of air between the lungs and outside environment is known as extern al respiration. This means the air is inhaled into the sacs of the lungs and passed through the blood vessels. Internal respiration happens when gases are exchanged between the cells and blood vessels in the body ” (The Top 8 Respiratory Illnesses and Diseas es ).

The main purpose is to ” transport air into the lungs and to facilitate the diffusion of oxygen into the blood stream”( Respiratory System Function ) by taking in oxygen and expelling carbon dioxide, which is called gas exchange. Gas exchange is automatic and is preformed by the lungs the respiratory tract to deliver oxygen from the lungs to the body and back out by eliminating carbon dioxide from the blo od stream to the lungs. The process is as follows: oxygen enters the body by breathing in air through the lungs, it travels through the bloodstream from cell to cell all through the body. As the oxygen circulates through the blood stream, carbon dioxide is expelled from it where it leaves the body as you exhale. The respiratory system has three primary organs , which include the airway, the lungs, and the muscles of respiration. According to the Interactive Anatomy Guide, these primary organs consist of “the airway which includes the nose, mouth, pharynx ( adenoids, tonsils ) , larynx (thyroid, cricoid, epiglottis) , trachea ( windpipe ) , bronchi , bronchioles and the alveoli , then the lungs , and the muscles of respirations that includes the diaphragm , intercostal muscles and ribs ” ( Rodriguez, E., McDonald, B., & McQuay, A. ) . These are the organs of the respiratory system, together there purpose is gas exchange. These separate organs were designed to work together to fulfil the purpose of providing oxygen and releasing carbon dioxide. Thus , together the primary function is gas exchange, separately each organ functions as only one part that makes a whole . The nose and mouth are mucous membranes that allows air to enter and use cilia to trap dirt as you breath in. Its function is to warm, humidify, and filter.

The pharynx is the throat that contains the adenoids and tonsils , which has three passageways for food, drink, and air; its function is to channel the air down the airway. The larynx also known as the voice box, is the upper part of the respiratory system that shapes sound into speech, contains the vocal cords , thyroid, cricoid, and epiglottis. The epig lottis in the larynx is a flap of tissue that close over the trachea when you swallow to prevent food from entering the air tube; known as aspiration. The air tube is the trachea or windpipe , a ring of cartilages that filters the air we breathe and directs it to the lungs via the bronchial tube. The bronchial tube is two air passages though which air enters and travels to the bronchioles and alveoli. Together the bronchioles and alveoli make up the parenchyma, which controls airflow resistance and air distr ibution t o the lungs, it is the site for oxygen and carbon dioxide exchange and it’s function is how the lungs give oxygen to the blood. The lungs are organs that transfer oxygen to and remove carbon dioxide fro the blood via gas exchange. The muscles of respiration which include the diaphragm, which is a muscle that separates the lungs from the abdomen and helps pump the lungs, the intercostal muscles helps move the ribs during breathing , and th e ribs protect the respiratory organs. ” Place your hand over your chest, take a deep breath, and then let it out. Of course you already know that your lungs fill with air when you breathe, but did you know that your respiratory system does more than simply move oxygen into and out of your lungs? The structures of th e respiratory system interact with structures of the skeletal, circulatory, nervous and muscular systems to help you smell, speak, and move oxygen into your bloodstream and waste out of it “( Smith ) .

The respiratory system interacts with and has a relationsh ip with all the other body systems, including the skeletal, cardiovascular, nervous, muscular, digestive, endocrine, urinary, reproductive, integumentary, immune, and lymphatic systems. According to the Visible Body website article , “The Relationships of t he Respiratory System ” , “the skeletal system provides structure to soft tissue in the upper respiratory tract. The perpendicular plate of the ethmoid separates the nasal cavity into side s, which is one of the structures that help form the nasal septum. The circulatory system work s together with the respiratory system to circulate blood and oxygen throughout the body. Air moves in and out of the lungs through the trachea, bronchi, and bronchioles. Blood moves in and out of the lungs through the pulmonary art eries and veins that connect to the heart. The pulmonary vessels operate backwards from the rest of the body’s vasculature: The pulmonary arteries carry deoxygenated blood from the heart to the lungs, and the pulmonary veins carry oxygenated blood back to the heart to be distributed to the body. The nervous system work s together with the respiratory system to identify odors in your environment. The cribriform plate of the ethmoid bone supports the olfactory bul b and the foramina in the ethmoid give passage to branches of the olfactory nerves. The muscular and nervous systems enable the involuntary breathing mechanism. The main muscles in inhalation and exhalation are the diaphragm and intercostals , as well as other muscle s”( Smith ). The other systems of the body also aid in some way such as the digestive system uses the pharynx to allow breathing and swallowing of food. The endocrine system releases hormones, like adrenaline to regulate breathing .

The urinary system helps the lungs get rid of carbon dioxide, water vapors, and other wastes through the kidneys which filters and purifies the blood. The reproductive system passes oxygen into the body and carbon dioxide out of the body that pushes air in and out of the lungs during breathing. The integumentary system maintains and supports the cond i tions that the cells, tissues, and organs need to function proper ly. It is the first defense mechanis m of the immune system. The immune system helps fight infection using white blood cells and the lymphatic system takes excess fluid from the organs and transports them back to balance fluid levels to keep organs functioning, as well as protects against infection. There are a great deal of specifics to the respiratory tract, but every separate part works together to maintain balance and proper function. However, sometimes there is a hiccup a nd it throws the system off tract and causes a problem in the system. This is how we end up with medical problems of the respiratory tract, as well as illnesses and diseases. There are many diseases and illness of the respiratory system, including viruses, chronic disorders, bronchial tube disorders, lung disorders, pleural disorders and upper respiratory disorders just to name a few . Viruses of the lung include influenza (Flu) , pneumonia, tuberculosis (TB) . Influenza is a respiratory infection caused by vi ral infection that passes through the air. Pneumonia is an infection that inflames the air sacs in one or both of the lungs and may fill with fluid. Tuberculosis is an infectious disease of the lung caused by mycobacterium tuberculosis, spreads through dro plets in the air.

Chronic Diseases of the lung include asthma, COPD, emphysema, lung cancer, and cystic fibrosis. Asthma is a chronic disease characterized by bronchial tubes inflamed and airways are constricted producing excessive mucous. COPD is chronic bronchial outflow obstruction a disease that blocks the air flow and makes it difficult to breath. Cystic fibrosis is a life threating disorder that damages the lung and digestive system. Upper respiratory disorders include croup, diphtheria, epistaxis, an d pertussis. Croup is an infection that blocks breathing and has a barking cough. Di phtheria is an infection of the nose and throat that’s preventable by vaccine. Epistaxis is bleeding from the nose caused by a clot. Pertussis is a highly contagious tract infection known for uncontrollable, violent cough, also known as whooping cough. Pleural disorders include mesothelioma, pleural effusion and pneumothorax. Mesothelioma is a tumor of the tissue that lines the lungs, stomach, heart, and other organs that causes cough and chest pain caused by asbestos. Pleural effusion is a build up of fluid between the tissues that line the lungs and the chest. Pneumothorax is a condition where the lung collapses. There are many medical diseases and problems that can occur, but just those few are common and well known. In conclusion, the respiratory system is a variety of organs t hat function together to produce life.

The major function is to supply the body with oxygen and release carbon dioxide from the body via gas exchange. The main purpose is the transport air in and out of the lungs and to introduce oxygen into the bloodstream. The respiratory system interacts with the oth er body systems to maintain balance in the body, as well as provide proper functioning of the body as a whole to produce life as we know it. S tart ing with a sing le cell manifesting into tissues, organs, organelles and then systems creating life. Remember ababy’s sound is heard 10 seconds after birth, when it takes its first breath and is highly anticipated and very important . Have you ever wondered why?

Breathing is Main of the Respiratory System

The Anatomy of the Respiratory System and Asthma