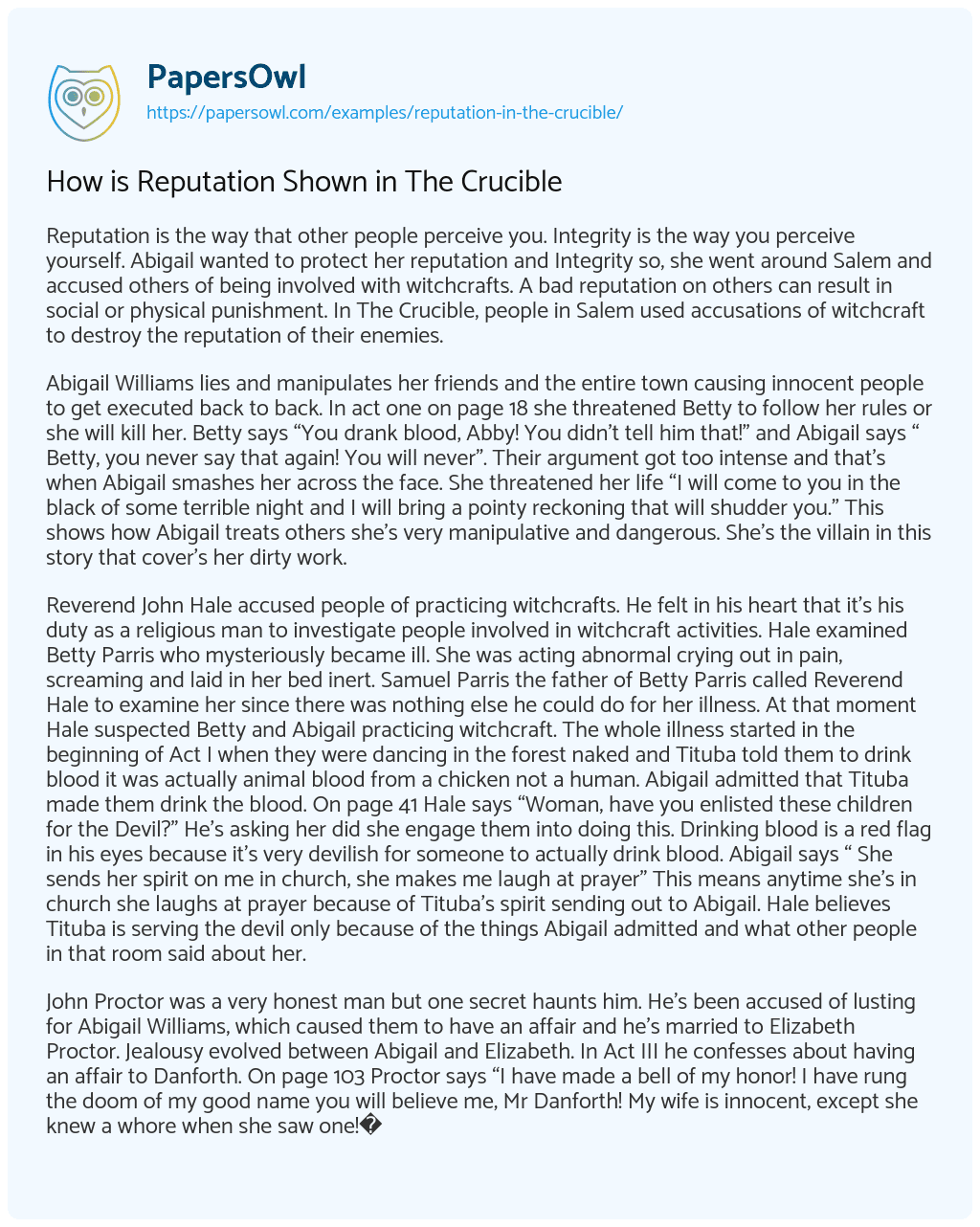 Reputation is the way that other people perceive you. Integrity is the way you perceive yourself. Abigail wanted to protect her reputation and Integrity so, she went around Salem and accused others of being involved with witchcrafts. A bad reputation on others can result in social or physical punishment. In The Crucible, people in Salem used accusations of witchcraft to destroy the reputation of their enemies.

Abigail Williams lies and manipulates her friends and the entire town causing innocent people to get executed back to back. In act one on page 18 she threatened Betty to follow her rules or she will kill her. Betty says “You drank blood, Abby! You didn’t tell him that!” and Abigail says “ Betty, you never say that again! You will never”. Their argument got too intense and that’s when Abigail smashes her across the face. She threatened her life “I will come to you in the black of some terrible night and I will bring a pointy reckoning that will shudder you.” This shows how Abigail treats others she’s very manipulative and dangerous. She’s the villain in this story that cover’s her dirty work.

Reverend John Hale accused people of practicing witchcrafts. He felt in his heart that it’s his duty as a religious man to investigate people involved in witchcraft activities. Hale examined Betty Parris who mysteriously became ill. She was acting abnormal crying out in pain, screaming and laid in her bed inert. Samuel Parris the father of Betty Parris called Reverend Hale to examine her since there was nothing else he could do for her illness. At that moment Hale suspected Betty and Abigail practicing witchcraft. The whole illness started in the beginning of Act I when they were dancing in the forest naked and Tituba told them to drink blood it was actually animal blood from a chicken not a human. Abigail admitted that Tituba made them drink the blood. On page 41 Hale says “Woman, have you enlisted these children for the Devil?” He’s asking her did she engage them into doing this. Drinking blood is a red flag in his eyes because it’s very devilish for someone to actually drink blood. Abigail says “ She sends her spirit on me in church, she makes me laugh at prayer” This means anytime she’s in church she laughs at prayer because of Tituba’s spirit sending out to Abigail. Hale believes Tituba is serving the devil only because of the things Abigail admitted and what other people in that room said about her.

John Proctor was a very honest man but one secret haunts him. He’s been accused of lusting for Abigail Williams, which caused them to have an affair and he’s married to Elizabeth Proctor. Jealousy evolved between Abigail and Elizabeth. In Act III he confesses about having an affair to Danforth. On page 103 Proctor says “I have made a bell of my honor! I have rung the doom of my good name you will believe me, Mr Danforth! My wife is innocent, except she knew a whore when she saw one!” He was referring to Abigail as a whore. Someone who goes around sleeping with a lot of people. Danforth asks Elizabeth “Is you husband a lecher?” A lecher is someone who has excessive or offensive sexual desire of lustfulness and that’s what he had with Abigail. Confessing to having an affair with her wasn’t easy to John Proctor because he has a reputation of being a good man but little do everyone know he’s been having sexual connection with Abigail Williams. He was sentenced to execution in the morning to be hanged.

In the Salem witch trials a bad reputation results in serious consequences with the court and people such as Proctor, Tituba and other innocent people who’s been accused by Abigail Williams were sent to their deaths. She used accusations of witchcraft to destroy her enemies reputation to only protect herself.

How is Reputation Shown in The Crucible. (2019, Feb 27). Retrieved from https://papersowl.com/examples/reputation-in-the-crucible/

The Crucible and the Conflicts the Characters