Religious View of Good Versus Evil 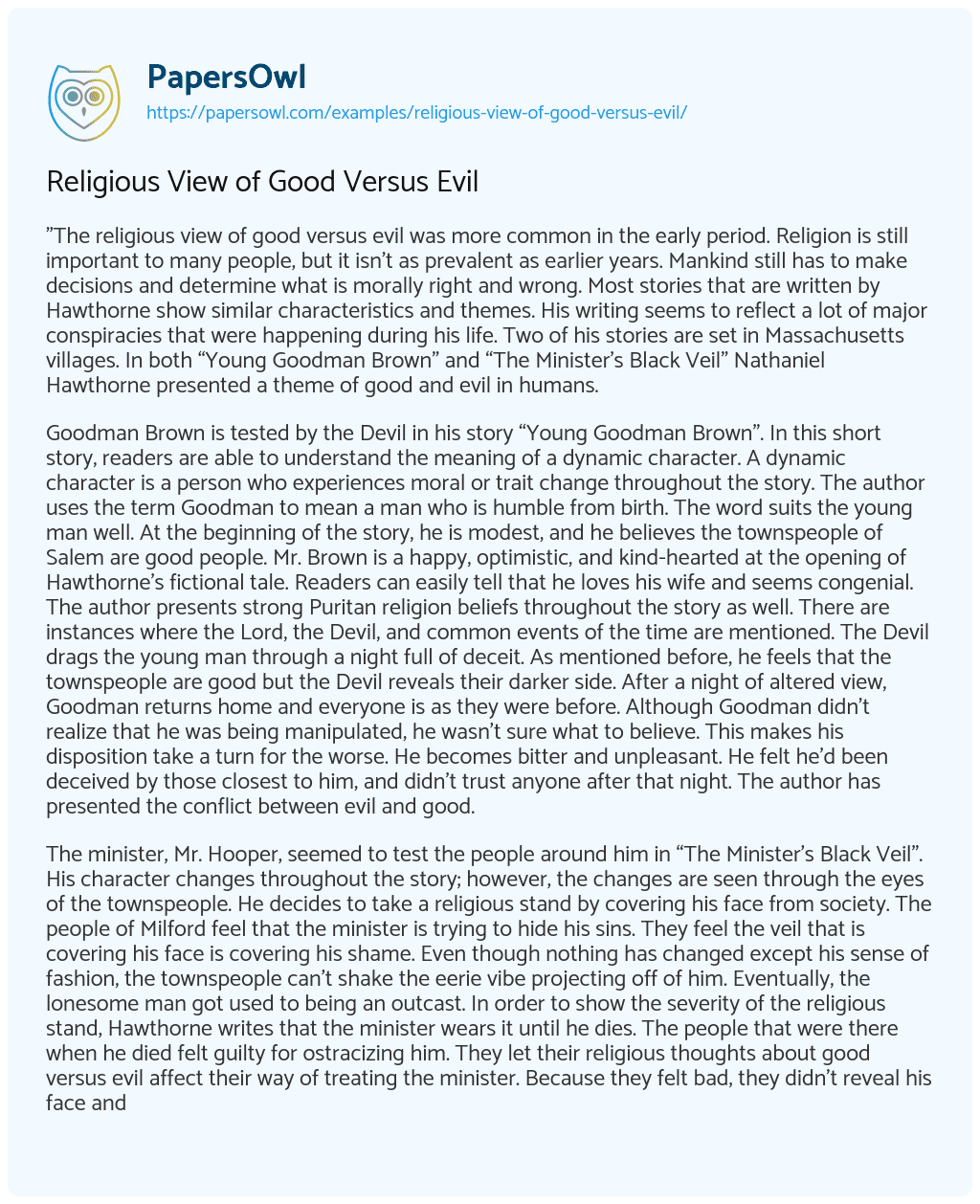 “The religious view of good versus evil was more common in the early period. Religion is still important to many people, but it isn’t as prevalent as earlier years. Mankind still has to make decisions and determine what is morally right and wrong. Most stories that are written by Hawthorne show similar characteristics and themes. His writing seems to reflect a lot of major conspiracies that were happening during his life. Two of his stories are set in Massachusetts villages. In both “Young Goodman Brown” and “The Minister’s Black Veil” Nathaniel Hawthorne presented a theme of good and evil in humans.

Goodman Brown is tested by the Devil in his story “Young Goodman Brown”. In this short story, readers are able to understand the meaning of a dynamic character. A dynamic character is a person who experiences moral or trait change throughout the story. The author uses the term Goodman to mean a man who is humble from birth. The word suits the young man well. At the beginning of the story, he is modest, and he believes the townspeople of Salem are good people. Mr. Brown is a happy, optimistic, and kind-hearted at the opening of Hawthorne’s fictional tale. Readers can easily tell that he loves his wife and seems congenial. The author presents strong Puritan religion beliefs throughout the story as well. There are instances where the Lord, the Devil, and common events of the time are mentioned. The Devil drags the young man through a night full of deceit. As mentioned before, he feels that the townspeople are good but the Devil reveals their darker side. After a night of altered view, Goodman returns home and everyone is as they were before. Although Goodman didn’t realize that he was being manipulated, he wasn’t sure what to believe. This makes his disposition take a turn for the worse. He becomes bitter and unpleasant. He felt he’d been deceived by those closest to him, and didn’t trust anyone after that night. The author has presented the conflict between evil and good.

The minister, Mr. Hooper, seemed to test the people around him in “The Minister’s Black Veil”. His character changes throughout the story; however, the changes are seen through the eyes of the townspeople. He decides to take a religious stand by covering his face from society. The people of Milford feel that the minister is trying to hide his sins. They feel the veil that is covering his face is covering his shame. Even though nothing has changed except his sense of fashion, the townspeople can’t shake the eerie vibe projecting off of him. Eventually, the lonesome man got used to being an outcast. In order to show the severity of the religious stand, Hawthorne writes that the minister wears it until he dies. The people that were there when he died felt guilty for ostracizing him. They let their religious thoughts about good versus evil affect their way of treating the minister. Because they felt bad, they didn’t reveal his face and buried him with the veil still covering his face.

Both characters go through a life-changing experience that leads to a change in their demeanor. The tales that Hawthorne wrote had some strong religious content. According to Jack Lynch, Hawthorne didn’t refer to his works as “short stories” or “novels”; he preferred to call them “tales” and “romance” (4). This is important because it gives insight into the turmoil of his time. The characters go through a battle of determining what is good and evil. Some visions were manipulated by the community’s opinion. Some visions were manipulated by a darker otherworldly character. Despite how things may appear, there is the free will to choose what is right and wrong. The society during Hawthorne’s life was more worried about religious aspects, but he connected the stories with a theme of good versus evil.”

Religious View of Good Versus Evil. (2021, Apr 27). Retrieved from https://papersowl.com/examples/religious-view-of-good-versus-evil/