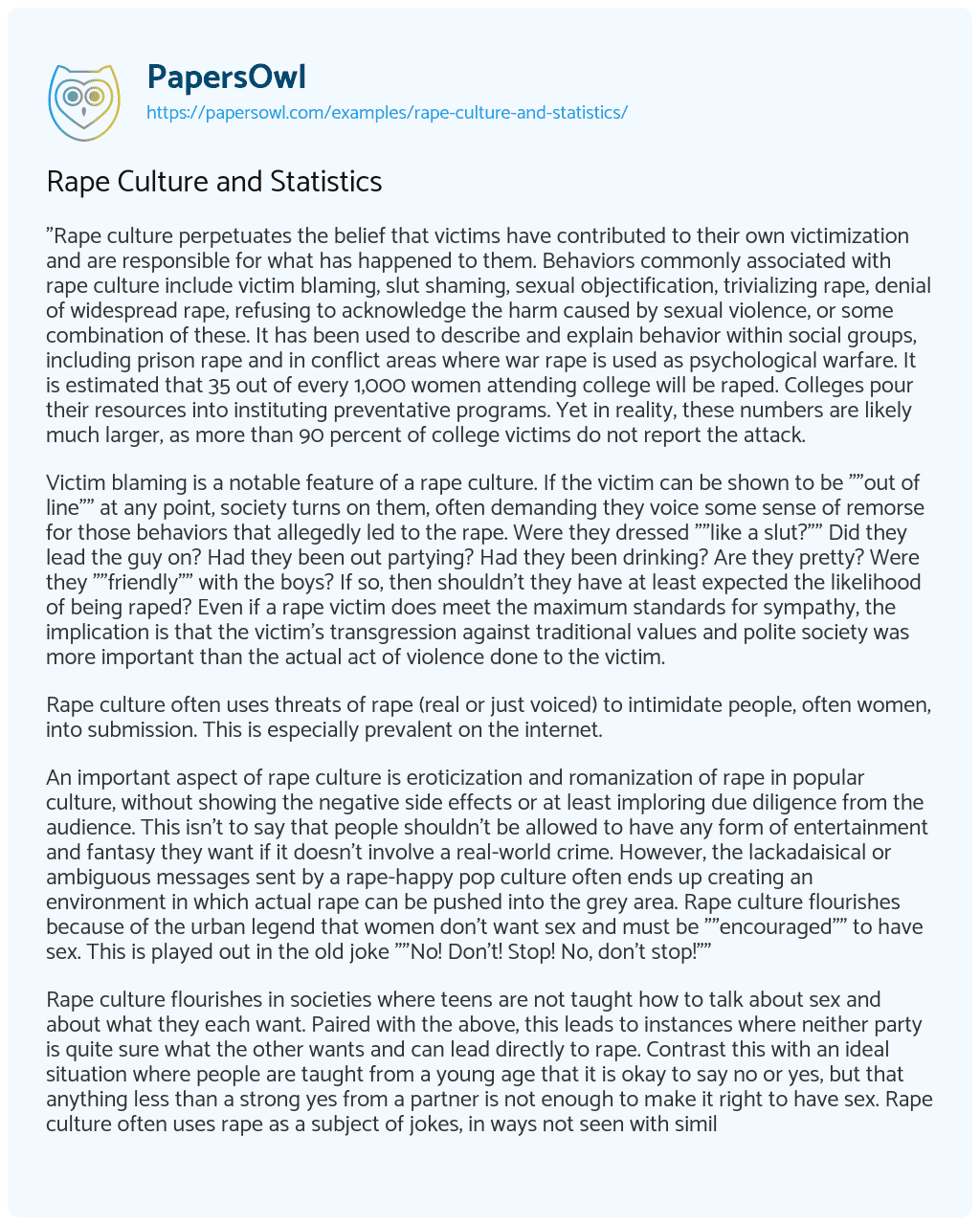 “Rape culture perpetuates the belief that victims have contributed to their own victimization and are responsible for what has happened to them. Behaviors commonly associated with rape culture include victim blaming, slut shaming, sexual objectification, trivializing rape, denial of widespread rape, refusing to acknowledge the harm caused by sexual violence, or some combination of these. It has been used to describe and explain behavior within social groups, including prison rape and in conflict areas where war rape is used as psychological warfare. It is estimated that 35 out of every 1,000 women attending college will be raped. Colleges pour their resources into instituting preventative programs. Yet in reality, these numbers are likely much larger, as more than 90 percent of college victims do not report the attack.

Victim blaming is a notable feature of a rape culture. If the victim can be shown to be “”out of line”” at any point, society turns on them, often demanding they voice some sense of remorse for those behaviors that allegedly led to the rape. Were they dressed “”like a slut?”” Did they lead the guy on? Had they been out partying? Had they been drinking? Are they pretty? Were they “”friendly”” with the boys? If so, then shouldn’t they have at least expected the likelihood of being raped? Even if a rape victim does meet the maximum standards for sympathy, the implication is that the victim’s transgression against traditional values and polite society was more important than the actual act of violence done to the victim.

Rape culture often uses threats of rape (real or just voiced) to intimidate people, often women, into submission. This is especially prevalent on the internet.

An important aspect of rape culture is eroticization and romanization of rape in popular culture, without showing the negative side effects or at least imploring due diligence from the audience. This isn’t to say that people shouldn’t be allowed to have any form of entertainment and fantasy they want if it doesn’t involve a real-world crime. However, the lackadaisical or ambiguous messages sent by a rape-happy pop culture often ends up creating an environment in which actual rape can be pushed into the grey area. Rape culture flourishes because of the urban legend that women don’t want sex and must be “”encouraged”” to have sex. This is played out in the old joke “”No! Don’t! Stop! No, don’t stop!””

Rape culture flourishes in societies where teens are not taught how to talk about sex and about what they each want. Paired with the above, this leads to instances where neither party is quite sure what the other wants and can lead directly to rape. Contrast this with an ideal situation where people are taught from a young age that it is okay to say no or yes, but that anything less than a strong yes from a partner is not enough to make it right to have sex. Rape culture often uses rape as a subject of jokes, in ways not seen with similar crimes like murder. For example, memes such as “”surprise sex!”” attempt to minimize rape, while at other times, rape apologia such as “”if they orgasmed, it wasn’t rape”” are thrown around as ‘jokes’, where the fact that the speaker “”obviously didn’t mean it”” (which the reader must simply assume) are the only reason not to take the statement at face value; however, actual rapists may interpret these statements as signs that others agree with them, or even encourage them to commit the act.

Jokes and other humor about rape are generally viewed as problematic as they try to bring levity to the horror of sexual assault. Jokes that marginalize victims by framing rape as a forgivable and just retribution for some other action (usually grossly disproportionate to the punishment e.g. “”leading a man on”” or “”heckling a comedian””) propagates rape culture. This includes jokes with male victims and especially prison rape, which feminists are just as much against as ones about male-on-female abuse (common in cop shows, even treating rape as part of the criminal’s punishment. Rape shield laws and victim confidentiality laws are specific attempts by various governments to fight rape culture. The former is to fight various victim blaming tactics often used by defense lawyers (most commonly invasive questions about sexual history that is not directly relevant to the case) while the latter is to prevent harassment and discrimination of victims.

In 2013, after sustained pressure from women’s groups, both Twitter and Facebook reviewed their policies around incidents of rape, threats of rape, and jokes about rape. Facebook agreed to view any images of rape, or humor specifically supporting rape or violence against women as hate speech and agreed to remove those types of images. Twitter, a medium that is a haven for threats of rape against outspoken women, agreed in early August 2013 that it would provide a better way to report such threats. Some ways that men and women can combat rape culture and victim blaming are avoiding using language that objectifies or degrades women. Speak out if you hear someone else making an offensive joke or trivializing rape. Hold abusers accountable for their actions: do not let them make excuses like blaming the victim, alcohol, or drugs for their behavior. Be an Active Bystander.

Rape Culture and Statistics. (2019, May 29). Retrieved from https://papersowl.com/examples/rape-culture-and-statistics/

What is Rape Culture?

Rape Culture what does not Kill Us Makes Us Stronger