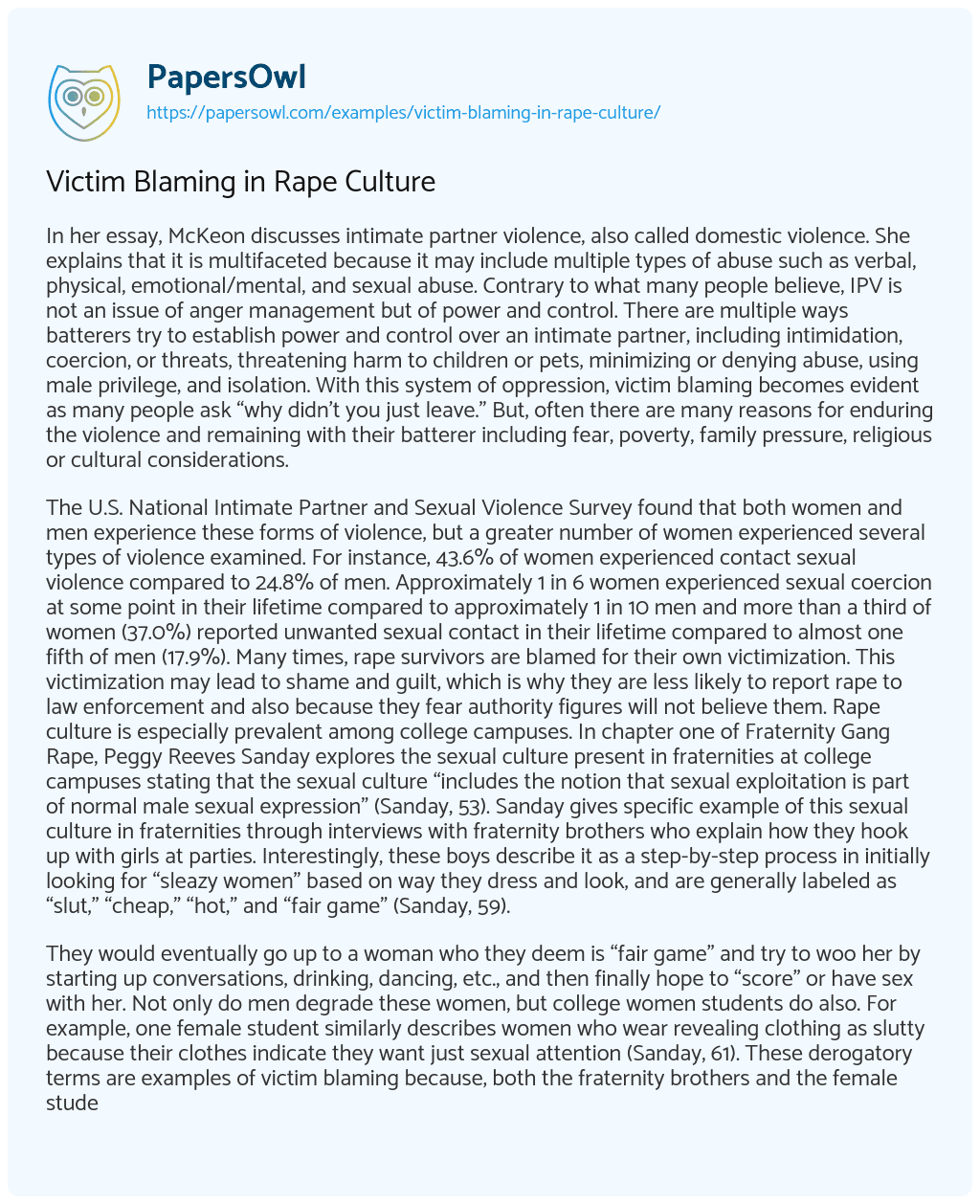 In her essay, McKeon discusses intimate partner violence, also called domestic violence. She explains that it is multifaceted because it may include multiple types of abuse such as verbal, physical, emotional/mental, and sexual abuse. Contrary to what many people believe, IPV is not an issue of anger management but of power and control. There are multiple ways batterers try to establish power and control over an intimate partner, including intimidation, coercion, or threats, threatening harm to children or pets, minimizing or denying abuse, using male privilege, and isolation. With this system of oppression, victim blaming becomes evident as many people ask “why didn’t you just leave.” But, often there are many reasons for enduring the violence and remaining with their batterer including fear, poverty, family pressure, religious or cultural considerations.

The U.S. National Intimate Partner and Sexual Violence Survey found that both women and men experience these forms of violence, but a greater number of women experienced several types of violence examined. For instance, 43.6% of women experienced contact sexual violence compared to 24.8% of men. Approximately 1 in 6 women experienced sexual coercion at some point in their lifetime compared to approximately 1 in 10 men and more than a third of women (37.0%) reported unwanted sexual contact in their lifetime compared to almost one fifth of men (17.9%). Many times, rape survivors are blamed for their own victimization. This victimization may lead to shame and guilt, which is why they are less likely to report rape to law enforcement and also because they fear authority figures will not believe them. Rape culture is especially prevalent among college campuses. In chapter one of Fraternity Gang Rape, Peggy Reeves Sanday explores the sexual culture present in fraternities at college campuses stating that the sexual culture “includes the notion that sexual exploitation is part of normal male sexual expression” (Sanday, 53). Sanday gives specific example of this sexual culture in fraternities through interviews with fraternity brothers who explain how they hook up with girls at parties. Interestingly, these boys describe it as a step-by-step process in initially looking for “sleazy women” based on way they dress and look, and are generally labeled as “slut,” “cheap,” “hot,” and “fair game” (Sanday, 59).

They would eventually go up to a woman who they deem is “fair game” and try to woo her by starting up conversations, drinking, dancing, etc., and then finally hope to “score” or have sex with her. Not only do men degrade these women, but college women students do also. For example, one female student similarly describes women who wear revealing clothing as slutty because their clothes indicate they want just sexual attention (Sanday, 61). These derogatory terms are examples of victim blaming because, both the fraternity brothers and the female student, are essentially saying that the sleazy women are “asking for it” based on how they dress. Sanday explores this sexual culture on college campuses through fraternities, where brothers only seek to dominate and control women who satisfy their sexual desire. In addition to this sexual culture, Sanday also begins to demonstrate the notion of victim blaming through the usage of such derogatory terms. So how exactly does this victim blaming phenomenon occur? Before one can understand what perpetuates victim blaming, it is necessary to define the term. Victim blaming refers to the act of judging victims of a crime and holding them “responsible for their own fate” (Grubb & Turner, 6). In other words, victim blaming occurs when people find instances within the victim’s behavior that makes them responsible for the incident and, therefore, justify the crime committed against them. In response to the question presented above, there are two concepts that really propagate the victim blaming phenomenon: just world belief theory and rape myth acceptance. The just world theory, created by sociologist Melvin J Lerner, explains that people view the world as just and believe that an individuals’ actions will make them “get what they deserve and deserve what they get” (Hayes et al., 202).

This enables the individual to feel a sense of security because they have control over their own actions and behavior. Thus, victim blaming is a manifestation of this theory because it also finds that the victim is partially responsible for an incident due to their behavior. This is because people try to protect their belief in a just world by justifying the event by holding themselves or others accountable for whatever any crime committed against that person, especially in sexual assault cases. Rape myths are defined as “prejudicial, stereotyped, or false beliefs about rape, rape victims, and rapists” (Burt, 217). Some common rape myths that justify sexual assault include the way the victims dresses, the fact that they were intoxicated at the time of the assault, that women often lie about rape, and that if a male pays for a date, the woman should reciprocate with sexual intercourse (Hayes et al., 207). Therefore, victim blaming is propagated by rape myth acceptance. Society often portrays females as victims through media, whether through news, films, music, literature, or social media sites, making victimhood and victim blaming is a socially constructed concept mainly tied to females.

This social construction of victimization is likely due to patriarchal views of women as being weaker and, therefore, needing to be sexually controlled. According to Hayes et al., when individuals can identify with a victim, then they are less likely to engage in victim blaming, resulting in gender differences within rape myth acceptance and subsequently, victim blaming (Hayes et al., 206) . Since women are often portrayed as victims, women are less likely to engage in victim blaming than men. Research indicates that men tend to have less supportive attitudes towards rape victims, are more tolerant of rape, have less empathy towards victims, are less intensely concerned about rape, and are more blaming and denigrating of sexual assault victims (Grubb & Turner, 15). Additionally, women hold offenders accountable for sexual assault regardless of a women’s dress and/or behavior (i.e. if the victim was thought of as being promiscuous or virginal). On the other hand, men were likely to hold the victim accountable if she was thought of as promiscuous (i.e. she wanted it) and hold the offender accountable if the victim was a virgin (Hayes et al., 208). However, if women do not identify with a victim, they may distance themselves from that victim to feel safe and because they believe that the victim got what they deserved, which relates back to the just world belief.

As mentioned above, victimization is socially constructed as media consistently represents females as victims of most crimes, especially sexual assault. The combinations of just world belief and rape myth acceptance not only perpetuate victim blaming, but continue to allow rape culture to persist. Stubbs-Richardson et al explore how rape culture is established through social media, specifically Twitter. They identified three themes related to rape culture within the tweets they found: (1) the virginwhore binary and the just world, (2) sharing information on the sexual assault cases as subnews, and (3) rape myth debunking to support victims. Tweets in the virgin-whore category suggest that some victims of sexual assault deserve what they get because of things such as the way they dressed and/or acted. Sharing information on the sexual assault cases as subnews allows Twitter users to include comments on what they think about the story they are sharing.

Finally, rape myth debunking tweets are when users who support victims make comments to refute popular rape myths and essentially condemn people who accept the rape culture or blame victims, such as arguing that rape should not be justified as an acceptable outcome for reasons of dress, behavior, alcohol or drugs, or previous sexual encounters. Previously, victim-blaming discussions were exchanged within relatively small groups in more private settings, whereas now, through the use of social media, such as Twitter, a single victim-blaming tweet can potentially reach and influence the attitudes and beliefs of thousands to tens of thousands of individuals.

Rape Culture what does not Kill Us Makes Us Stronger

What is Rape Culture?