Raisin in the Sun 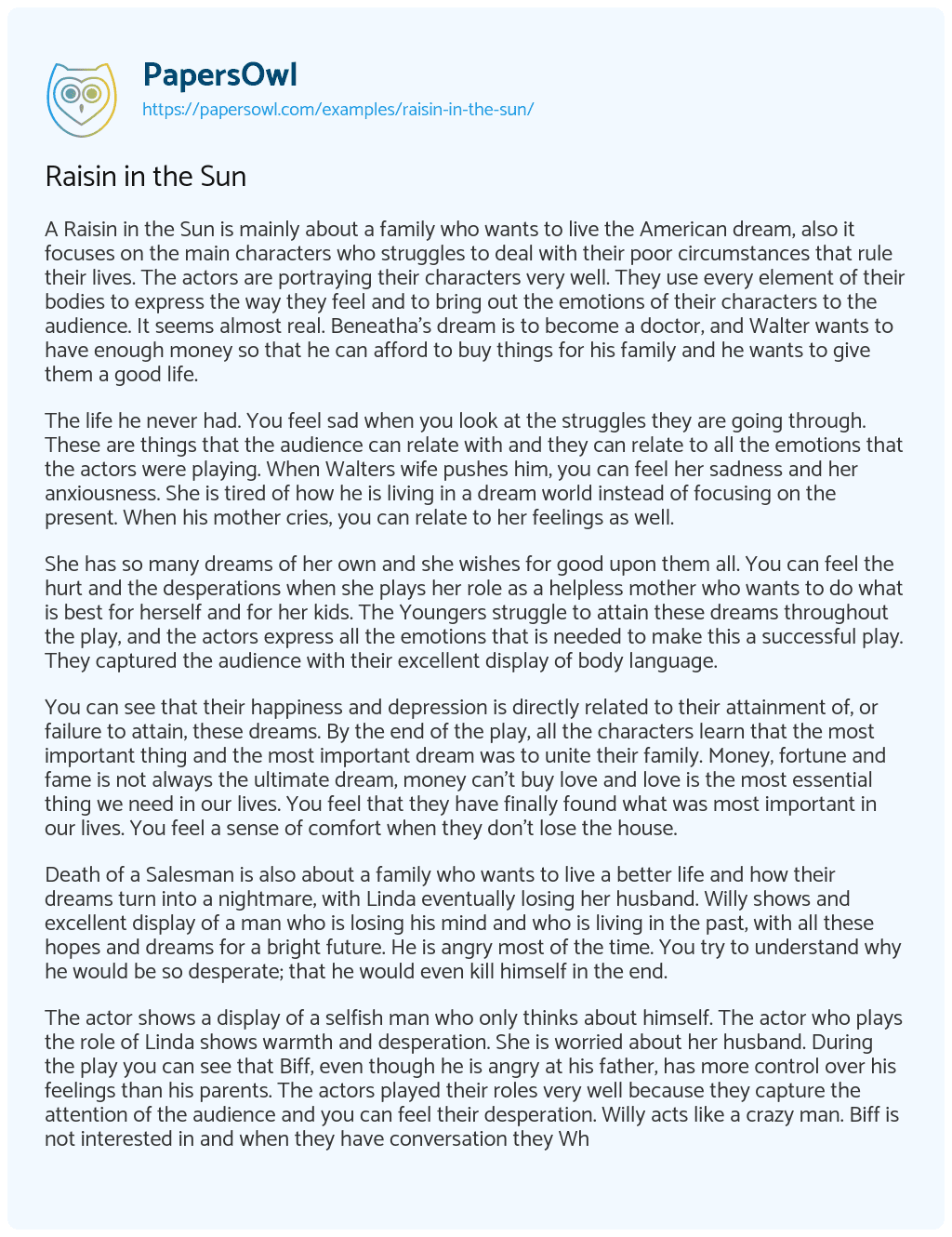 A Raisin in the Sun is mainly about a family who wants to live the American dream, also it focuses on the main characters who struggles to deal with their poor circumstances that rule their lives. The actors are portraying their characters very well. They use every element of their bodies to express the way they feel and to bring out the emotions of their characters to the audience. It seems almost real. Beneatha’s dream is to become a doctor, and Walter wants to have enough money so that he can afford to buy things for his family and he wants to give them a good life.

The life he never had. You feel sad when you look at the struggles they are going through. These are things that the audience can relate with and they can relate to all the emotions that the actors were playing. When Walters wife pushes him, you can feel her sadness and her anxiousness. She is tired of how he is living in a dream world instead of focusing on the present. When his mother cries, you can relate to her feelings as well.

She has so many dreams of her own and she wishes for good upon them all. You can feel the hurt and the desperations when she plays her role as a helpless mother who wants to do what is best for herself and for her kids. The Youngers struggle to attain these dreams throughout the play, and the actors express all the emotions that is needed to make this a successful play. They captured the audience with their excellent display of body language.

You can see that their happiness and depression is directly related to their attainment of, or failure to attain, these dreams. By the end of the play, all the characters learn that the most important thing and the most important dream was to unite their family. Money, fortune and fame is not always the ultimate dream, money can’t buy love and love is the most essential thing we need in our lives. You feel that they have finally found what was most important in our lives. You feel a sense of comfort when they don’t lose the house.

Death of a Salesman is also about a family who wants to live a better life and how their dreams turn into a nightmare, with Linda eventually losing her husband. Willy shows and excellent display of a man who is losing his mind and who is living in the past, with all these hopes and dreams for a bright future. He is angry most of the time. You try to understand why he would be so desperate; that he would even kill himself in the end.

The actor shows a display of a selfish man who only thinks about himself. The actor who plays the role of Linda shows warmth and desperation. She is worried about her husband. During the play you can see that Biff, even though he is angry at his father, has more control over his feelings than his parents. The actors played their roles very well because they capture the attention of the audience and you can feel their desperation. Willy acts like a crazy man. Biff is not interested in and when they have conversation they When Happy and Willy came together, I felt nervous and fear. You can see that Happy is a womanizer and how he likes to exaggerate.

The first act introduces the main character, Rene Gallimard, who is thinking back about his affair with a Chinese lover, Liling Song. As he listens to the song he relives the events that led to him being imprisoned. He is a spy that worked for the French embassy in China. While he worked there he fell in love with a beautiful Chinese opera singer, Song Liling and he becomes curious about her and the way she is.

He sees her soft nature and her submissive ways and he is utterly and completely attracted to her; but he doesn’t know that she is indeed a male and that female roles in traditional Beijing opera were actually played by males. He has a burning desire for an Oriental woman and her submissiveness, and he starts frequenting the Peking Opera just to see Song. Both actors play their roles very well. Liling Song knows that Rene Gallimard is unaware that is a male and he continues to pretend to be a female. He does not reveal his gender to him.

He allows Gallimard to live in a dream world where his imagination and fantasy about this Oriental beauty and her mysterious ways becomes illusional and irrational. His behavior is like of a man who lives in a world that he created for himself. He starts visiting his Oriental beauty and they regularly start having tea together. He becomes obsessed with thoughts of her, refusing even to accept the truth about Liling Song’s identity. He lives in a dream world, and he doesn’t want to wake up from this dream to face the reality of the truth because he refuses to stop wanting and loving this Chinese woman because he believes and fools himself into thinking that he has known, and been loved by, the perfect woman.

He portrays the role of a man who is not faithful to his wife and who will do anything to get the woman that he wants. He has another affair with a woman called Renee but he doesn’t stay with her because she can’t be the woman that he wants her to be. I think the actor played his role perfectly, as a delusional man who was prepared to lose his career, his wife and his dignity because of this obsession.

A Raisin in the Sun American Dream