The Struggle in a Raisin in the Sun 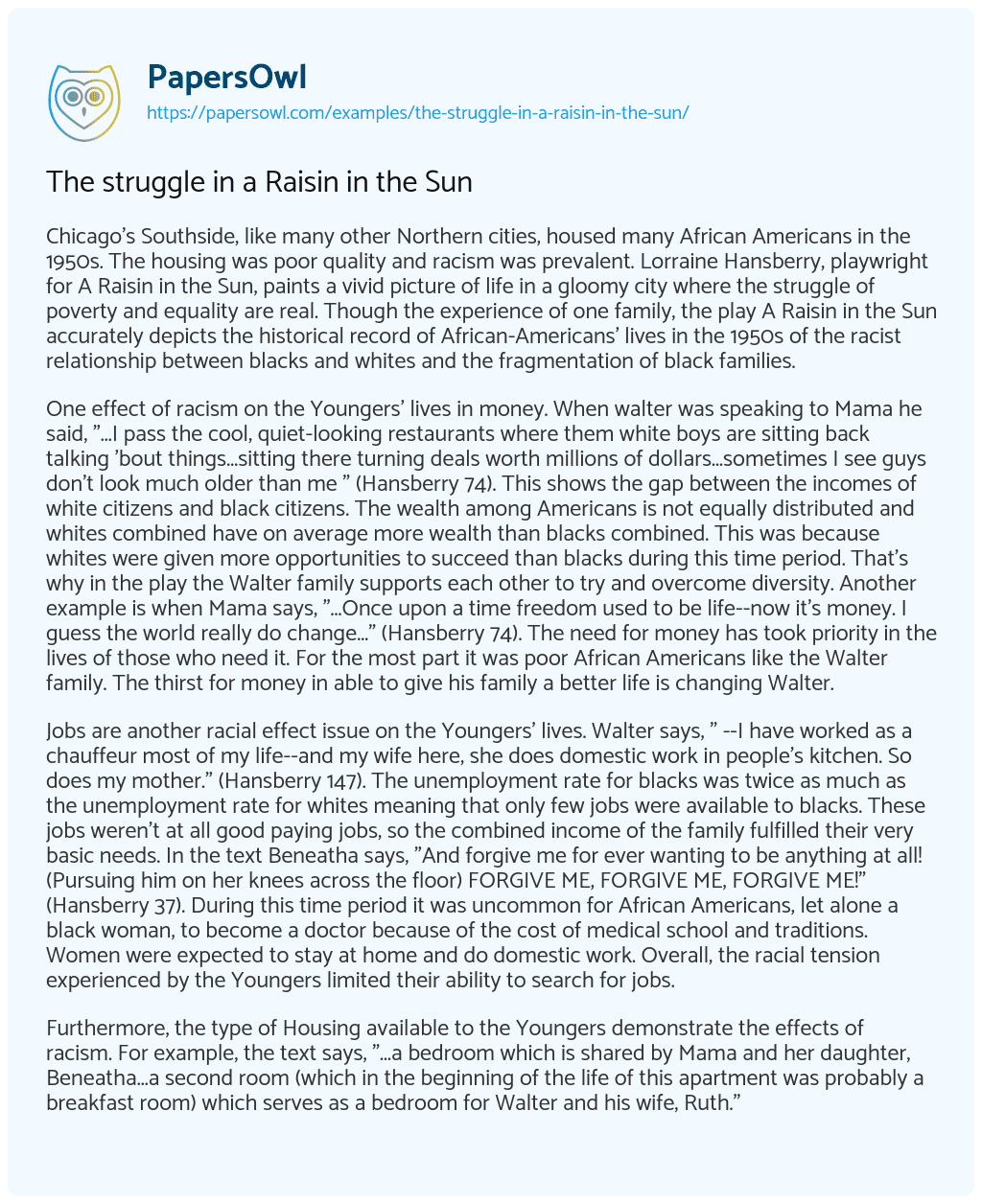 Chicago’s Southside, like many other Northern cities, housed many African Americans in the 1950s. The housing was poor quality and racism was prevalent. Lorraine Hansberry, playwright for A Raisin in the Sun, paints a vivid picture of life in a gloomy city where the struggle of poverty and equality are real. Though the experience of one family, the play A Raisin in the Sun accurately depicts the historical record of African-Americans’ lives in the 1950s of the racist relationship between blacks and whites and the fragmentation of black families.

One effect of racism on the Youngers’ lives in money. When walter was speaking to Mama he said, “…I pass the cool, quiet-looking restaurants where them white boys are sitting back talking ’bout things…sitting there turning deals worth millions of dollars…sometimes I see guys don’t look much older than me ” (Hansberry 74). This shows the gap between the incomes of white citizens and black citizens. The wealth among Americans is not equally distributed and whites combined have on average more wealth than blacks combined. This was because whites were given more opportunities to succeed than blacks during this time period. That’s why in the play the Walter family supports each other to try and overcome diversity. Another example is when Mama says, “…Once upon a time freedom used to be life–now it’s money. I guess the world really do change…” (Hansberry 74). The need for money has took priority in the lives of those who need it. For the most part it was poor African Americans like the Walter family. The thirst for money in able to give his family a better life is changing Walter.

Jobs are another racial effect issue on the Youngers’ lives. Walter says, ” –I have worked as a chauffeur most of my life–and my wife here, she does domestic work in people’s kitchen. So does my mother.” (Hansberry 147). The unemployment rate for blacks was twice as much as the unemployment rate for whites meaning that only few jobs were available to blacks. These jobs weren’t at all good paying jobs, so the combined income of the family fulfilled their very basic needs. In the text Beneatha says, “And forgive me for ever wanting to be anything at all! (Pursuing him on her knees across the floor) FORGIVE ME, FORGIVE ME, FORGIVE ME!” (Hansberry 37). During this time period it was uncommon for African Americans, let alone a black woman, to become a doctor because of the cost of medical school and traditions. Women were expected to stay at home and do domestic work. Overall, the racial tension experienced by the Youngers limited their ability to search for jobs.

Furthermore, the type of Housing available to the Youngers demonstrate the effects of racism. For example, the text says, “…a bedroom which is shared by Mama and her daughter, Beneatha…a second room (which in the beginning of the life of this apartment was probably a breakfast room) which serves as a bedroom for Walter and his wife, Ruth.”(Hansberry 24). This depicts the conditions that most black lived in the northern cities. Partly because of their low income, the poor quality of the projects was the only housing available to them. Also in the text Lindner says, “…as I say, that for the happiness of all concerned that our Negro families are happier when they live in their own communities.” (Hansberry 118). This gives an example of how many white Americans didn’t want to co-exist with blacks in communities. Therefore, black housing was typically separated and the quality downgraded from those of white houses. In brief, racial tension between blacks and whites resulted in African Americans being stuck in the projects and white Americans living in the Suburbs.

Moreover, and effect that racism has on the Youngers is Unity. In the text, Beneatha says, “There is simply no blasted God–there is only man and it is he who makes miracles! (Mama absorbs the speech… and slaps her[Beneatha]powerfully across the face.”(Hansberry 51). During this time period there was much stress put on black families by society, so family bonding through a common identity was a way of relief from the burdens of society. When Beneatha states she doesn’t believe in God, she was breaking one of the family traditions and was casting away principles that Mama and Big Walter believed in. Furthermore, Asagai says, “…there is only one large circle that we march in, around and around, each of us with our own little picture in front of us–“(Hansberry 134). Beneatha feels as if everyone is tunnel visioned on their own worries and fate has it like that. Even though society was separate between white and blacks, blacks should bond together and help each other out. In short, the Youngers are being broken apart by anger triggered by a racist society.

Finally, an effect of racism on the Youngers is self-esteem.

The struggle in a Raisin in the Sun. (2020, Jan 25). Retrieved from https://papersowl.com/examples/the-struggle-in-a-raisin-in-the-sun/

Discrimination against Blacks in a Raisin in the Sun

Racism in a Raisin in the Sun