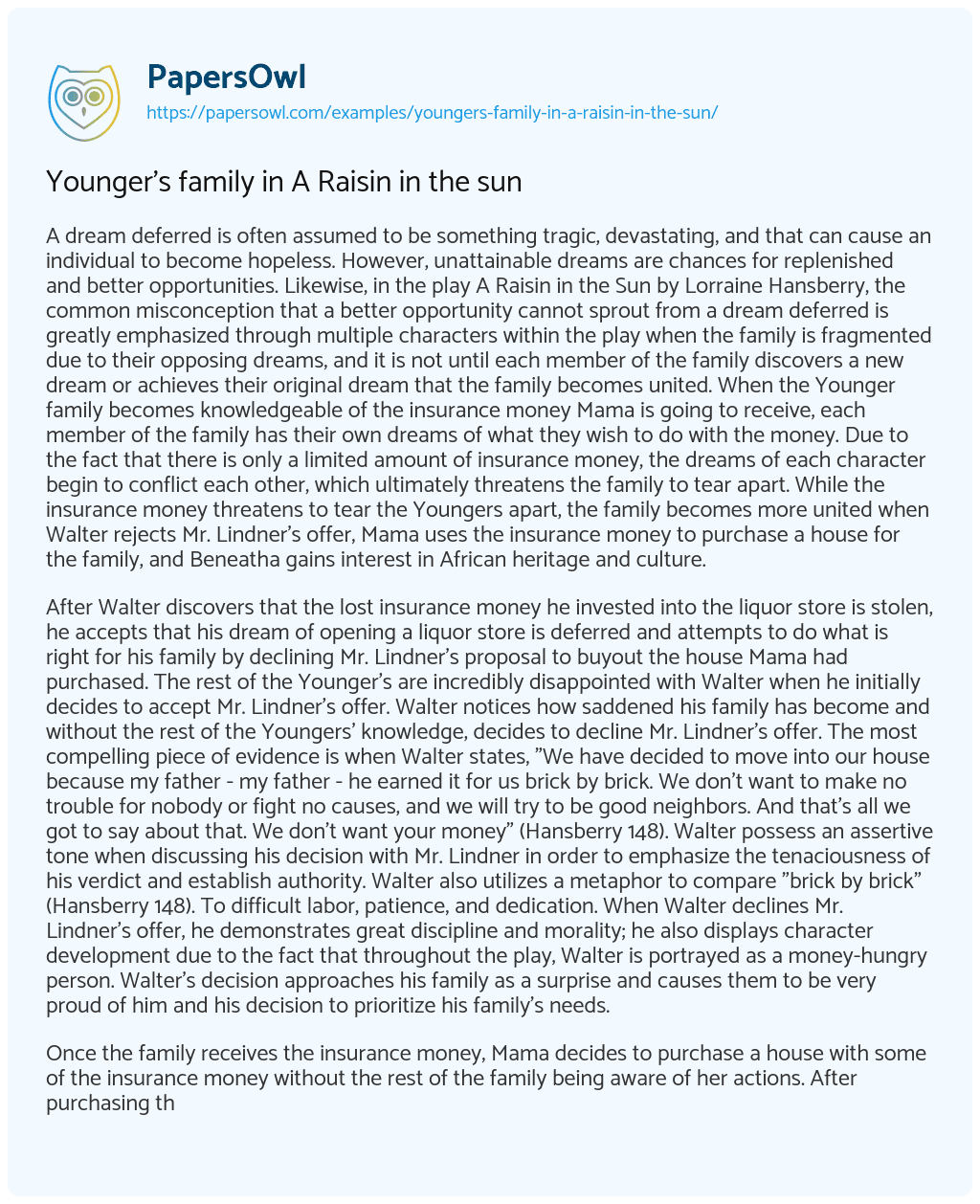 A dream deferred is often assumed to be something tragic, devastating, and that can cause an individual to become hopeless. However, unattainable dreams are chances for replenished and better opportunities. Likewise, in the play A Raisin in the Sun by Lorraine Hansberry, the common misconception that a better opportunity cannot sprout from a dream deferred is greatly emphasized through multiple characters within the play when the family is fragmented due to their opposing dreams, and it is not until each member of the family discovers a new dream or achieves their original dream that the family becomes united. When the Younger family becomes knowledgeable of the insurance money Mama is going to receive, each member of the family has their own dreams of what they wish to do with the money. Due to the fact that there is only a limited amount of insurance money, the dreams of each character begin to conflict each other, which ultimately threatens the family to tear apart. While the insurance money threatens to tear the Youngers apart, the family becomes more united when Walter rejects Mr. Lindner’s offer, Mama uses the insurance money to purchase a house for the family, and Beneatha gains interest in African heritage and culture.

After Walter discovers that the lost insurance money he invested into the liquor store is stolen, he accepts that his dream of opening a liquor store is deferred and attempts to do what is right for his family by declining Mr. Lindner’s proposal to buyout the house Mama had purchased. The rest of the Younger’s are incredibly disappointed with Walter when he initially decides to accept Mr. Lindner’s offer. Walter notices how saddened his family has become and without the rest of the Youngers’ knowledge, decides to decline Mr. Lindner’s offer. The most compelling piece of evidence is when Walter states, “We have decided to move into our house because my father – my father – he earned it for us brick by brick. We don’t want to make no trouble for nobody or fight no causes, and we will try to be good neighbors. And that’s all we got to say about that. We don’t want your money” (Hansberry 148). Walter possess an assertive tone when discussing his decision with Mr. Lindner in order to emphasize the tenaciousness of his verdict and establish authority. Walter also utilizes a metaphor to compare “brick by brick” (Hansberry 148). To difficult labor, patience, and dedication. When Walter declines Mr. Lindner’s offer, he demonstrates great discipline and morality; he also displays character development due to the fact that throughout the play, Walter is portrayed as a money-hungry person. Walter’s decision approaches his family as a surprise and causes them to be very proud of him and his decision to prioritize his family’s needs.

Once the family receives the insurance money, Mama decides to purchase a house with some of the insurance money without the rest of the family being aware of her actions. After purchasing the house, Mama announces the news to the rest of the Youngers. This causes an immense amount of frustration in Walter, while the rest of the family is very thrilled. With attention to the quote when Mama states, “Course I don’t want to make it sound fancier than it is… It’s just a plain little old house – but it’s made good and solid – and it will be ours. Walter Lee – it makes a difference in a man when he walk on floors that belong to him…” (Hansberry 92). Mama possess an innocent tone in order to exhibit that she had purchased the house out of the generosity of her heart and her desire to unite her family. Mama demonstrates her love and care for her family by purchasing a much more suitable home for them that will provide them with more space to roam freely and to diminish the tension between the Younger’s over their dispute towards the insurance money. Mama also emphasizes the importance of ownership when she says to Walter, “Walter Lee – it makes a difference in a man when he can walk on floors that belong to him…” (Hansberry 92). Walter desires to be the dominant figure within the household and he believes the only way to do so is by obtaining an extensive amount of wealth, but Mama believes that ownership and family are essential to becoming a dominant figure in a household. Mama attempts to convey the importance of the unification of family with her actions.

When Beneatha cuts her hair short to connect with her African roots, her and Walter bond with one another by performing a dance and chanting aimless phrases of what they assume is a part of African culture. When Walter enters the house as he is drunk, he notices Beneatha’s new interest in African culture and decides to accompany Beneatha in her interest and share a humorous moment with her. A key point is when Walter states “Me and Somo…That’s my man, Kenyatta. FLAMING SPEAR! HOT DAMN! OCOMOGOSIAY…” (Hansberry 78). Beneatha encourages Walter by responding in the same manner, “OCOMOGOSIAY, FLAMING SPEAR!” (Hansberry 78). With Walter and Beneatha both possessing wholesome and passionate tones, the two emphasize that despite the conflict between them, they are still able to connect with one another by sharing the same interest and supporting each other through comedy. As siblings normally do, Walter and Beneatha tease each other and unite together with these chants and dances and display feelings of amity towards each other.

Although the dreams of each member of the Younger family conflict with each other and threaten to tear them apart, the family is able to persevere through their disputes and recognize that they must unite in order to progress and live fulfilling lives. The family unites when Walter rejects Mr. Lindner’s offer to buyout their house, Mama uses the insurance money to purchase a house for the family, and Beneatha becomes intrigued and curious about African heritage and culture. Unlike the rest of the family, Walter is very devastated when Mama purchases the new house and decides to neglect his family because of it. Beneatha’s newfound interest in African culture, the family gains an insight into her interests and desires which causes the family to become closer. Ultimately, the Younger’s family consolidates and it leaves readers with a sense of hope and contentedness.

Younger's family in A Raisin in the sun. (2019, Sep 14). Retrieved from https://papersowl.com/examples/youngers-family-in-a-raisin-in-the-sun/

A Complex Analysis of the Raisin in the Sun