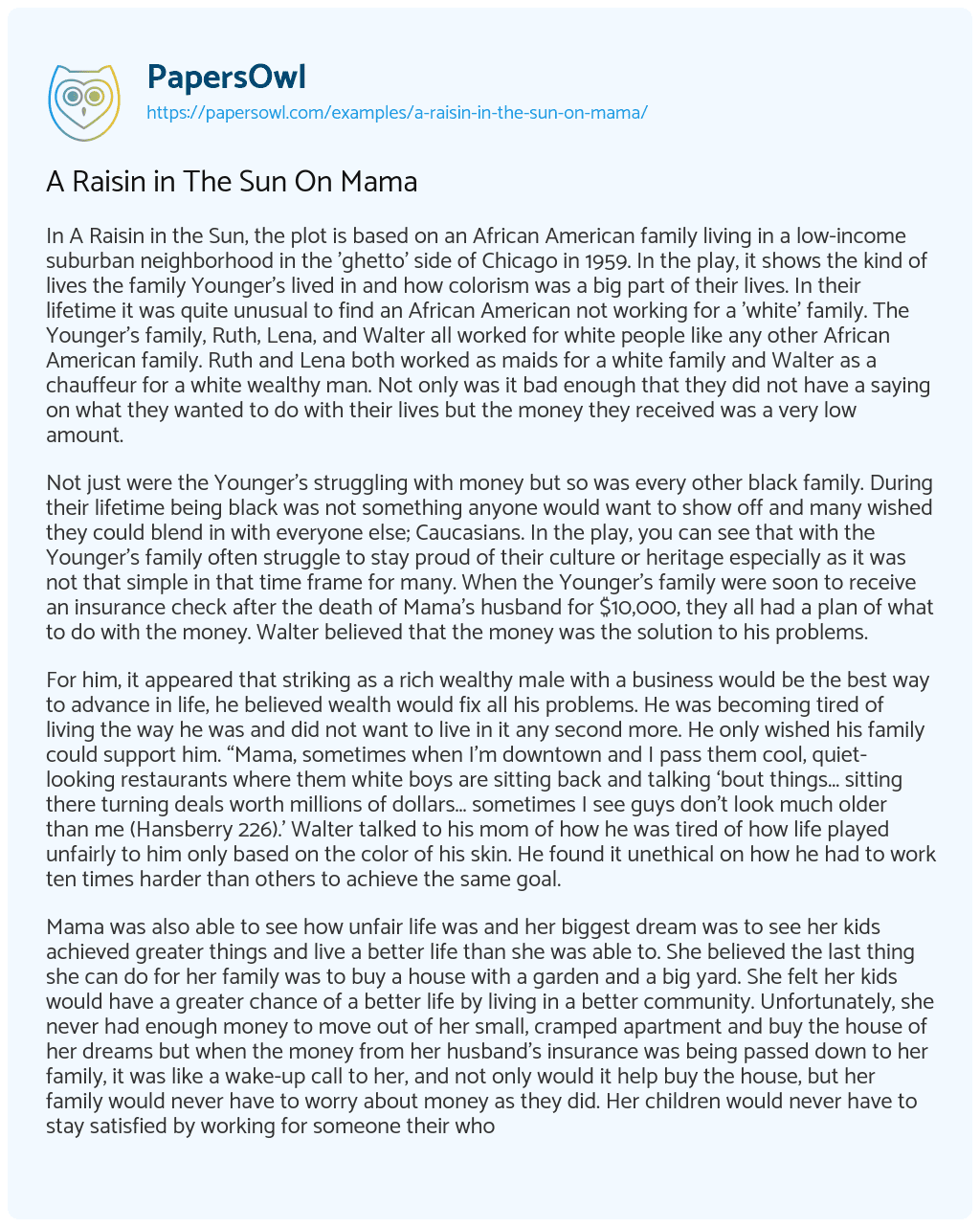 In A Raisin in the Sun, the plot is based on an African American family living in a low-income suburban neighborhood in the ‘ghetto’ side of Chicago in 1959. In the play, it shows the kind of lives the family Younger’s lived in and how colorism was a big part of their lives. In their lifetime it was quite unusual to find an African American not working for a ‘white’ family. The Younger’s family, Ruth, Lena, and Walter all worked for white people like any other African American family. Ruth and Lena both worked as maids for a white family and Walter as a chauffeur for a white wealthy man. Not only was it bad enough that they did not have a saying on what they wanted to do with their lives but the money they received was a very low amount.

Not just were the Younger’s struggling with money but so was every other black family. During their lifetime being black was not something anyone would want to show off and many wished they could blend in with everyone else; Caucasians. In the play, you can see that with the Younger’s family often struggle to stay proud of their culture or heritage especially as it was not that simple in that time frame for many. When the Younger’s family were soon to receive an insurance check after the death of Mama’s husband for $10,000, they all had a plan of what to do with the money. Walter believed that the money was the solution to his problems.

For him, it appeared that striking as a rich wealthy male with a business would be the best way to advance in life, he believed wealth would fix all his problems. He was becoming tired of living the way he was and did not want to live in it any second more. He only wished his family could support him. “Mama, sometimes when I’m downtown and I pass them cool, quiet-looking restaurants where them white boys are sitting back and talking ‘bout things… sitting there turning deals worth millions of dollars… sometimes I see guys don’t look much older than me (Hansberry 226).’ Walter talked to his mom of how he was tired of how life played unfairly to him only based on the color of his skin. He found it unethical on how he had to work ten times harder than others to achieve the same goal.

Mama was also able to see how unfair life was and her biggest dream was to see her kids achieved greater things and live a better life than she was able to. She believed the last thing she can do for her family was to buy a house with a garden and a big yard. She felt her kids would have a greater chance of a better life by living in a better community. Unfortunately, she never had enough money to move out of her small, cramped apartment and buy the house of her dreams but when the money from her husband’s insurance was being passed down to her family, it was like a wake-up call to her, and not only would it help buy the house, but her family would never have to worry about money as they did. Her children would never have to stay satisfied by working for someone their whole lives, they would be able to make a career that will bring them wealth, at least that is what she fantasized of. Mama’s daughter, Beneatha also dreams of obtaining a better life than the one she and her family were living in.

She had a dream of becoming a doctor, unfortunately, medical school was not something her family could afford, her dream of becoming a strong and wealthy woman was looking to only become a dream of hers that would never happen. And not only was money a problem but she was facing with people discouraging her based on her looks. But when the money comes along there could really be a chance of achieving her dreams. When mama gains the money of her husband to goes to by the house and soon after she buys it she is presented by racism from the owner’s association wishing the buy the house to prevent an African American family from moving into their community and shows how he sees them as if they were from another planet when he refers to them as ‘you people’. That itself shows how life for African Americans was not an easy trip, yet if they stayed together and worked through it, they could live the lives they all deserved.