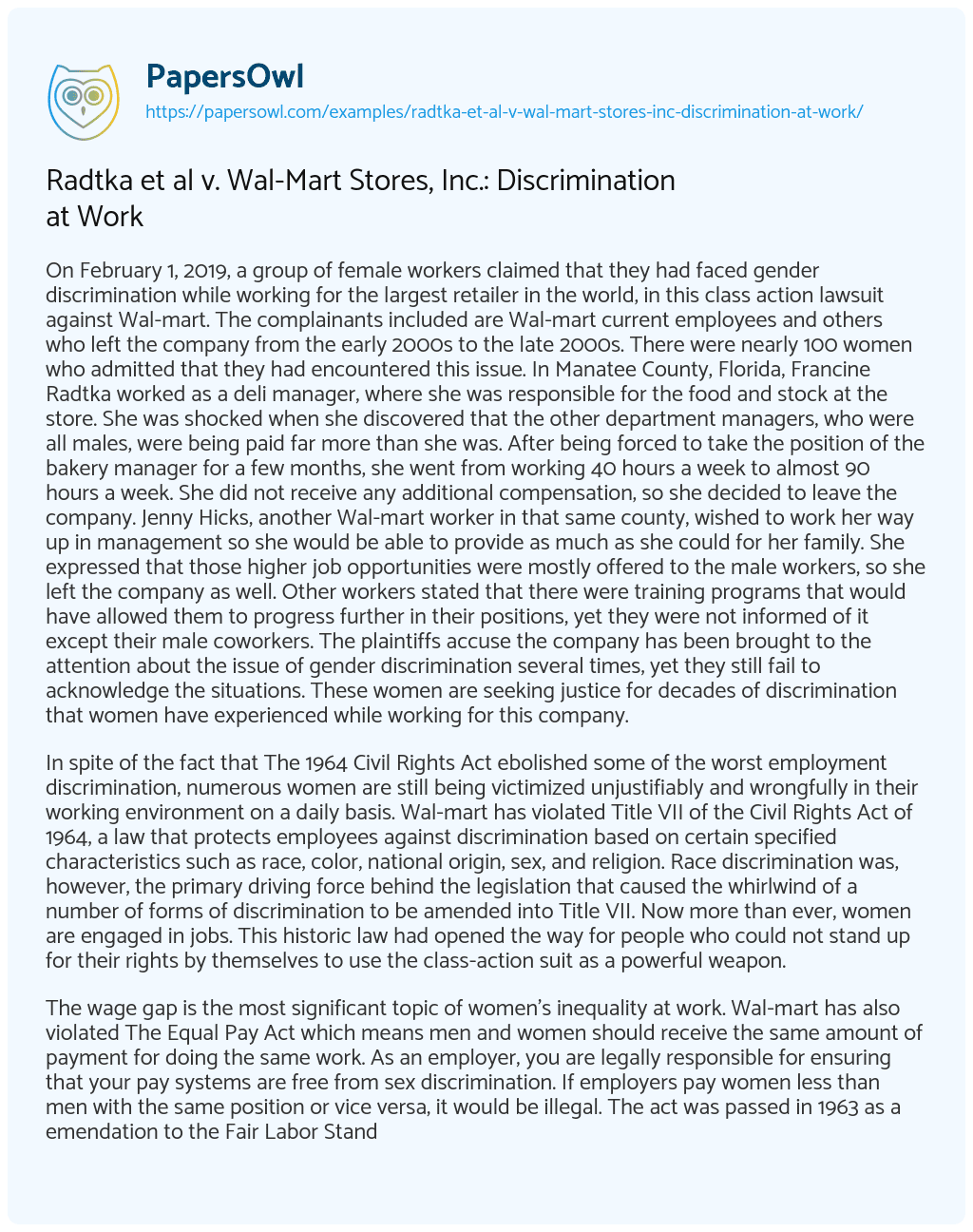 On February 1, 2019, a group of female workers claimed that they had faced gender discrimination while working for the largest retailer in the world, in this class action lawsuit against Wal-mart. The complainants included are Wal-mart current employees and others who left the company from the early 2000s to the late 2000s. There were nearly 100 women who admitted that they had encountered this issue. In Manatee County, Florida, Francine Radtka worked as a deli manager, where she was responsible for the food and stock at the store. She was shocked when she discovered that the other department managers, who were all males, were being paid far more than she was. After being forced to take the position of the bakery manager for a few months, she went from working 40 hours a week to almost 90 hours a week. She did not receive any additional compensation, so she decided to leave the company. Jenny Hicks, another Wal-mart worker in that same county, wished to work her way up in management so she would be able to provide as much as she could for her family. She expressed that those higher job opportunities were mostly offered to the male workers, so she left the company as well. Other workers stated that there were training programs that would have allowed them to progress further in their positions, yet they were not informed of it except their male coworkers. The plaintiffs accuse the company has been brought to the attention about the issue of gender discrimination several times, yet they still fail to acknowledge the situations. These women are seeking justice for decades of discrimination that women have experienced while working for this company.

In spite of the fact that The 1964 Civil Rights Act ebolished some of the worst employment discrimination, numerous women are still being victimized unjustifiably and wrongfully in their working environment on a daily basis. Wal-mart has violated Title VII of the Civil Rights Act of 1964, a law that protects employees against discrimination based on certain specified characteristics such as race, color, national origin, sex, and religion. Race discrimination was, however, the primary driving force behind the legislation that caused the whirlwind of a number of forms of discrimination to be amended into Title VII. Now more than ever, women are engaged in jobs. This historic law had opened the way for people who could not stand up for their rights by themselves to use the class-action suit as a powerful weapon.

The wage gap is the most significant topic of women’s inequality at work. Wal-mart has also violated The Equal Pay Act which means men and women should receive the same amount of payment for doing the same work. As an employer, you are legally responsible for ensuring that your pay systems are free from sex discrimination. If employers pay women less than men with the same position or vice versa, it would be illegal. The act was passed in 1963 as a emendation to the Fair Labor Standards Act. Most ladies are still isolated into few occupations such as service workers, medical caretakers, and instructors. An economy in which all individuals regardless of their sexual orientation or race are paid fairly will become more powerful. In the event that an employer can’t or chooses not to show you that females and males are paid equally for the job you’re seeking for, it’s probably best to look somewhere else.

This must be taken seriously as it addresses issues related to the human resources of discrimination at work. It is important for top managers not to distinguish their employees based on their sexual orientation, appearance, race, or any other reason. Fairness is another part where managers must ensure that their employees are treated equally. However, this is not the first time Wal-mart has faced a lawsuit for gender bias. In 2001, Betty Dukes who was a Wal-mart “greeter,” filed a lawsuit against Wal-mart for sex discrimination on behalf of the 1.5 million of the female workers that worked for the company since 1998. This was the largest class-action lawsuit ever in U.S history. They claimed that the local Wal-Mart managers’ subjective discretion over pay and promotions was exercised disproportionately in favor of men. After repeated request for a promotion, she suffered a pay cut of 5%. This lawsuit shows how much the standards have changed. In the end, it was a 5-4 decision in which its more conservative justices prevailed. In the majority opinion, written by Justice Antonin Scalia, the court ruled that the lawsuit was technically flawed because it had failed to prove that the women in the class had issues of law or fact in common (Corkey, 2017).

Although Wal-Mart has created a store with low prices that has benefitted many Americans, under its disguise of generosity, these lawsuits portray the company as having an unethical workplace. In 2015, a majority of Wal-mart managers and officials were males, despite the fact that females make up 56% of the company’s U.S workforce (Hasan, 2015). A study from 2003 found that female Wal-mart employees at all different types of positions earned less than their male coworkers. They earned $5,300 less per year than man on average. Those who worked in hourly positions earned $1,100 less than men in the same position. Those in salaried positions earned $14,500 less than men in the same position (Drogin, 2003). The ratio of males to females could also lead to sexual harrassment which also violates Title VII of the Civil Rights Act of 1964. This can have a direct and indirect impact on women’s career choices, solidifying job segregation and reinforcing the wage gap. Many women who are sexually harrassed at their job feel more anxiety and depression, which lessens efficiency and work performance. Ladies in working environments that don’t address lewd behavior may feel less enabled to negotiate salaries and raises, discouraging their long-time earnings. Wal-Mart has transformed into a dominating supermarket by annihilating the rights of their employees, by destroying the occupations of many Americans, and by changing the quality of life in American society.

On February 1st 2019, a class-action lawsuit was filed by Francine Radtka along with a large group of other women who claimed that they experienced sex discrimination and unequal pay while working under your organization, violating Title Vii of The Civil Rights Act of 1964 and The Equal Pay Act. With roughly 2.3 million representatives, your organization is a a large employer and as ongoing claims have appeared, you might not have the best procedures set up with regards to eliminating discrimination. Since you are the defendant far more often than most any other retail company, your legal team has the most impact in characterizing work laws for the whole U.S. retail industry. Due to to unethical brusiness practices utilized, a remarkable amount of controversy for your company has arisen. In order for a company to survive in an economy, you have to find ethical issues through your representatives before there will become more serious and bigger problems. In the corporate level of your organization, it appeared that this kind of conduct was not noticeable, yet at the store level it was. While Wal-Mart is an entirely beneficial and profitable organization, you have neglected to discover and recognize moral or ethical issues which has decimated the vision and reputation of the founder of your organization, Sam Walton, and depicts Wal-Mart as a careless employer. In order for your orgranization to survive and to improve your image as a neglectful business, action must take place with the ethics utilized in treating your workers fairly. Retailers large or small must focus their attention on employee legal actions because each legal battle sets an example for every retail organization in the world doing business in the U.S.

Legislations are Used to Serve Many Purposes