Racial Profiling and Stereotypes of Ethnicity 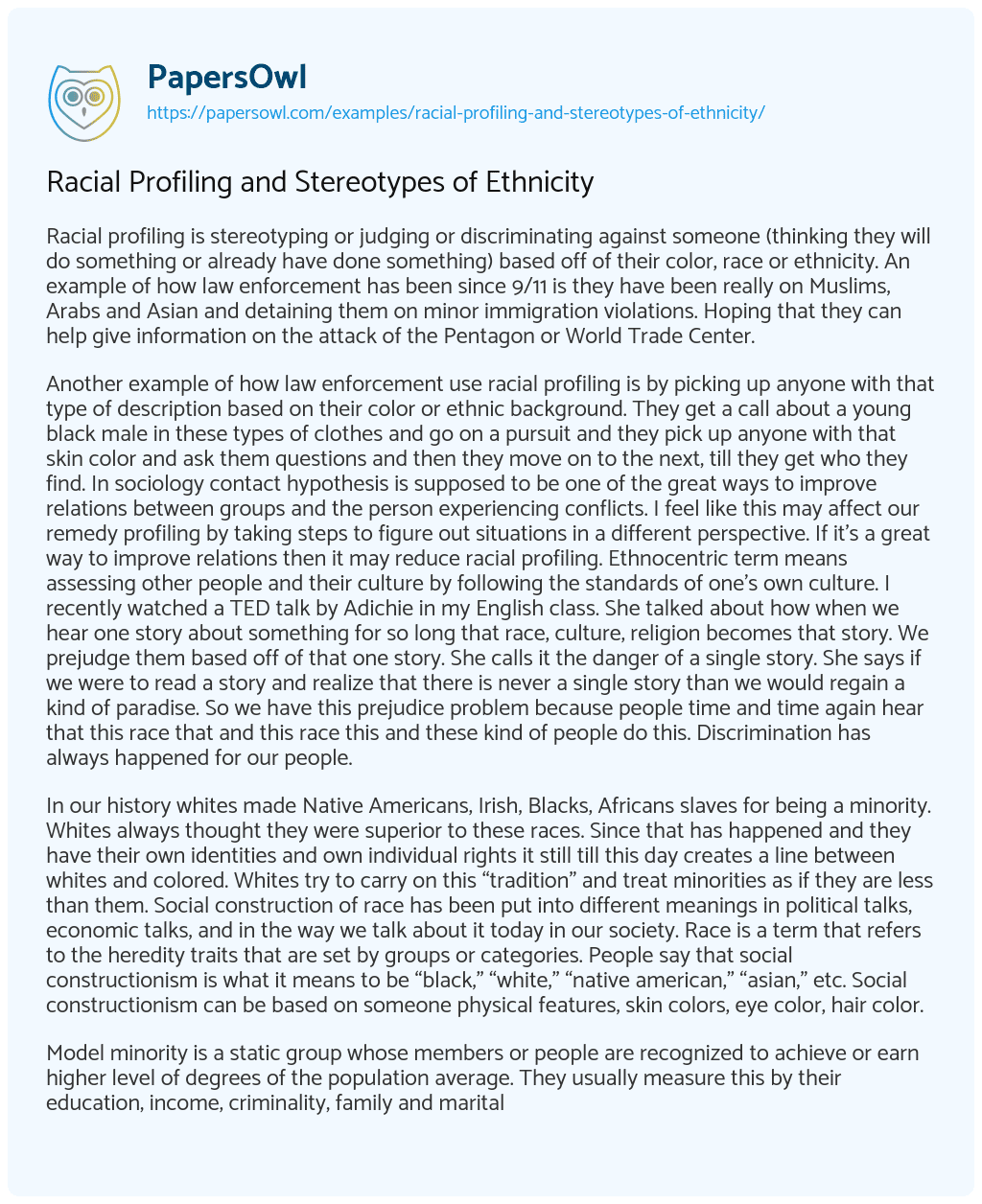 Racial profiling is stereotyping or judging or discriminating against someone (thinking they will do something or already have done something) based off of their color, race or ethnicity. An example of how law enforcement has been since 9/11 is they have been really on Muslims, Arabs and Asian and detaining them on minor immigration violations. Hoping that they can help give information on the attack of the Pentagon or World Trade Center.

Another example of how law enforcement use racial profiling is by picking up anyone with that type of description based on their color or ethnic background. They get a call about a young black male in these types of clothes and go on a pursuit and they pick up anyone with that skin color and ask them questions and then they move on to the next, till they get who they find. In sociology contact hypothesis is supposed to be one of the great ways to improve relations between groups and the person experiencing conflicts. I feel like this may affect our remedy profiling by taking steps to figure out situations in a different perspective. If it’s a great way to improve relations then it may reduce racial profiling. Ethnocentric term means assessing other people and their culture by following the standards of one’s own culture. I recently watched a TED talk by Adichie in my English class. She talked about how when we hear one story about something for so long that race, culture, religion becomes that story. We prejudge them based off of that one story. She calls it the danger of a single story. She says if we were to read a story and realize that there is never a single story than we would regain a kind of paradise. So we have this prejudice problem because people time and time again hear that this race that and this race this and these kind of people do this. Discrimination has always happened for our people.

In our history whites made Native Americans, Irish, Blacks, Africans slaves for being a minority. Whites always thought they were superior to these races. Since that has happened and they have their own identities and own individual rights it still till this day creates a line between whites and colored. Whites try to carry on this “tradition” and treat minorities as if they are less than them. Social construction of race has been put into different meanings in political talks, economic talks, and in the way we talk about it today in our society. Race is a term that refers to the heredity traits that are set by groups or categories. People say that social constructionism is what it means to be “black,” “white,” “native american,” “asian,” etc. Social constructionism can be based on someone physical features, skin colors, eye color, hair color.

Model minority is a static group whose members or people are recognized to achieve or earn higher level of degrees of the population average. They usually measure this by their education, income, criminality, family and marital stability. Asian’s are the most common model minority group, they seem to have the most positive stereotype about them. From what I have read the model minority group that is applied to the Asian minority is due to their educational levels and their professionalism. I think a disadvantage of being a minority model is always having to live up to those expectations. I think an advantage of this is that people find you valuable.

Racial Profiling and Stereotypes of Ethnicity. (2021, Jun 03). Retrieved from https://papersowl.com/examples/racial-profiling-and-stereotypes-of-ethnicity/

Issue of Racial Profiling in Communities