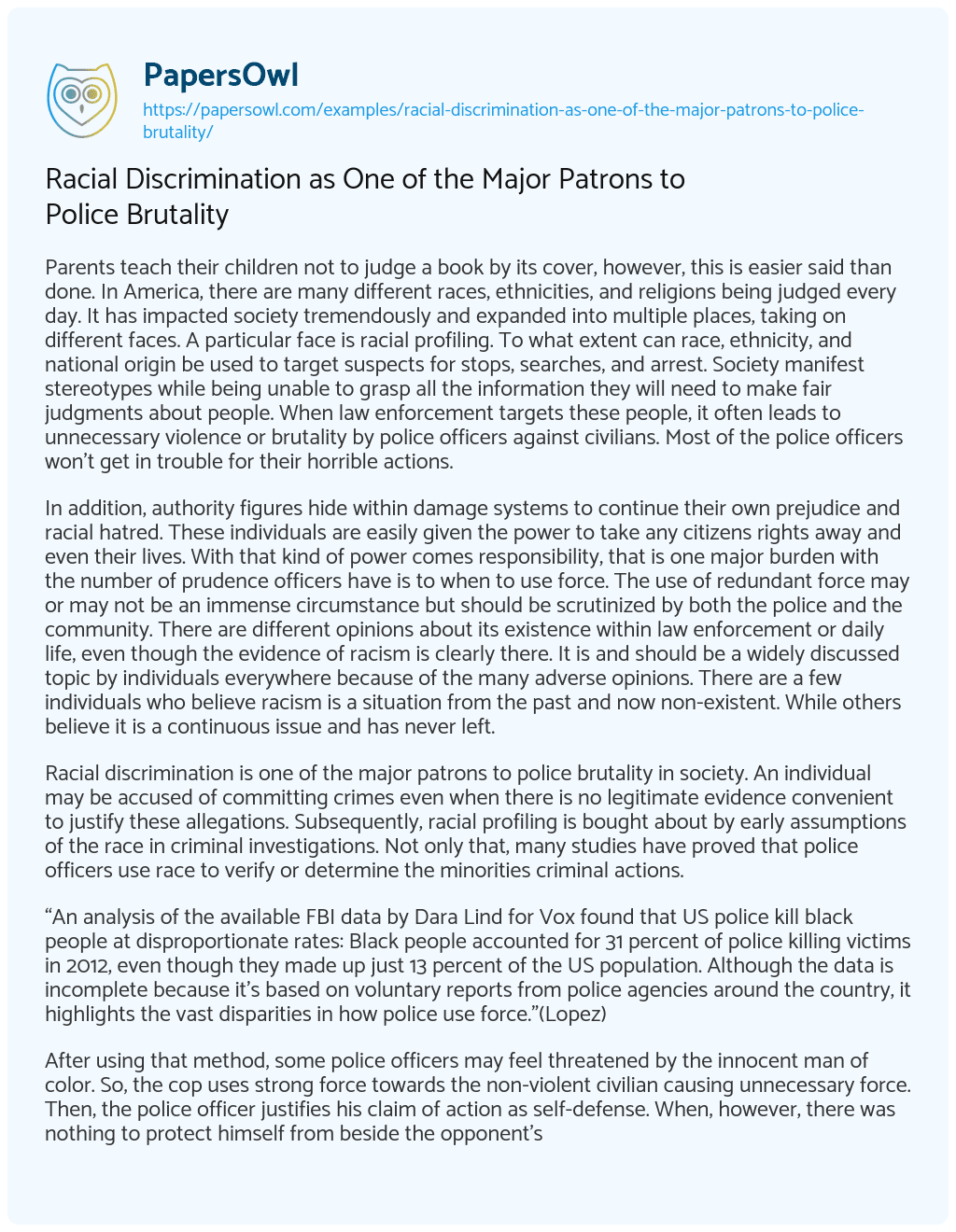 Parents teach their children not to judge a book by its cover, however, this is easier said than done. In America, there are many different races, ethnicities, and religions being judged every day. It has impacted society tremendously and expanded into multiple places, taking on different faces. A particular face is racial profiling. To what extent can race, ethnicity, and national origin be used to target suspects for stops, searches, and arrest. Society manifest stereotypes while being unable to grasp all the information they will need to make fair judgments about people. When law enforcement targets these people, it often leads to unnecessary violence or brutality by police officers against civilians. Most of the police officers won’t get in trouble for their horrible actions.

In addition, authority figures hide within damage systems to continue their own prejudice and racial hatred. These individuals are easily given the power to take any citizens rights away and even their lives. With that kind of power comes responsibility, that is one major burden with the number of prudence officers have is to when to use force. The use of redundant force may or may not be an immense circumstance but should be scrutinized by both the police and the community. There are different opinions about its existence within law enforcement or daily life, even though the evidence of racism is clearly there. It is and should be a widely discussed topic by individuals everywhere because of the many adverse opinions. There are a few individuals who believe racism is a situation from the past and now non-existent. While others believe it is a continuous issue and has never left.

Racial discrimination is one of the major patrons to police brutality in society. An individual may be accused of committing crimes even when there is no legitimate evidence convenient to justify these allegations. Subsequently, racial profiling is bought about by early assumptions of the race in criminal investigations. Not only that, many studies have proved that police officers use race to verify or determine the minorities criminal actions.

“An analysis of the available FBI data by Dara Lind for Vox found that US police kill black people at disproportionate rates: Black people accounted for 31 percent of police killing victims in 2012, even though they made up just 13 percent of the US population. Although the data is incomplete because it’s based on voluntary reports from police agencies around the country, it highlights the vast disparities in how police use force.”(Lopez)

After using that method, some police officers may feel threatened by the innocent man of color. So, the cop uses strong force towards the non-violent civilian causing unnecessary force. Then, the police officer justifies his claim of action as self-defense. When, however, there was nothing to protect himself from beside the opponent’s skin color. Cops have to make quick decisions to proceed with their job of protection, but when it comes to African Americans the decisions to protect are mostly the opposite or non-existent compared to other races.

According to a new series of studies published by the American Psychological Association, the investigation leads people to justify greater use of force against black men compared to their white counterparts. In the study, hundreds of participants were categorized connecting their face to body size, but the color of there skin was different. “Throughout all the test, researchers produced the same results: When participants believed the man in the images is black, they generally saw the man as larger, more threatening, and potentially more harmful in an altercation than a white person. And they were more likely to say the use of force was justified against the black men than the white men.”(Lopez)

Society is losing too many wonderful African Americans in this world. There have been so many instances where men have been shot and killed for standing and being black. Recently in 2012, an innocent, black teen, Trayvon Martin, was killed unexpectedly by a civilian. “Trayvon Martin walked into a 7-Eleven in Sanford, Florida, grabbing a bag of Skittles and a can of Arizona iced tea.

The hood from his dark gray sweatshirt over his head, he walked up to the counter, reached deep into his pants’ pockets, paid the clerk, then walked out.”(Botelho) While walking home from the store, the watch captain, George Zimmerman, approached him. Based on Trayvon Martins skin or outlook, the watch captain suspected that he looked like a criminal.

However, the only suspicious weapon on him was probably the bag of skittles and his skin color. While walking home from the store, he was approached by a neighborhood watch captain, George Zimmerman. “Zimmerman’s voice, meanwhile, comes through on a 911 call he made around that time, telling a dispatcher about “a real suspicious guy.”(Botelho) Zimmerman started and continued to follow him. There have been assumptions that loud talking between Zimmerman and Trayvon Martin. Then, later that night he was killed. Trayvon Martin was another wonderful, innocent black male taken out of this life simply because of the color of his skin.

Racial Discrimination as One of the Major Patrons to Police Brutality. (2021, Apr 26). Retrieved from https://papersowl.com/examples/racial-discrimination-as-one-of-the-major-patrons-to-police-brutality/