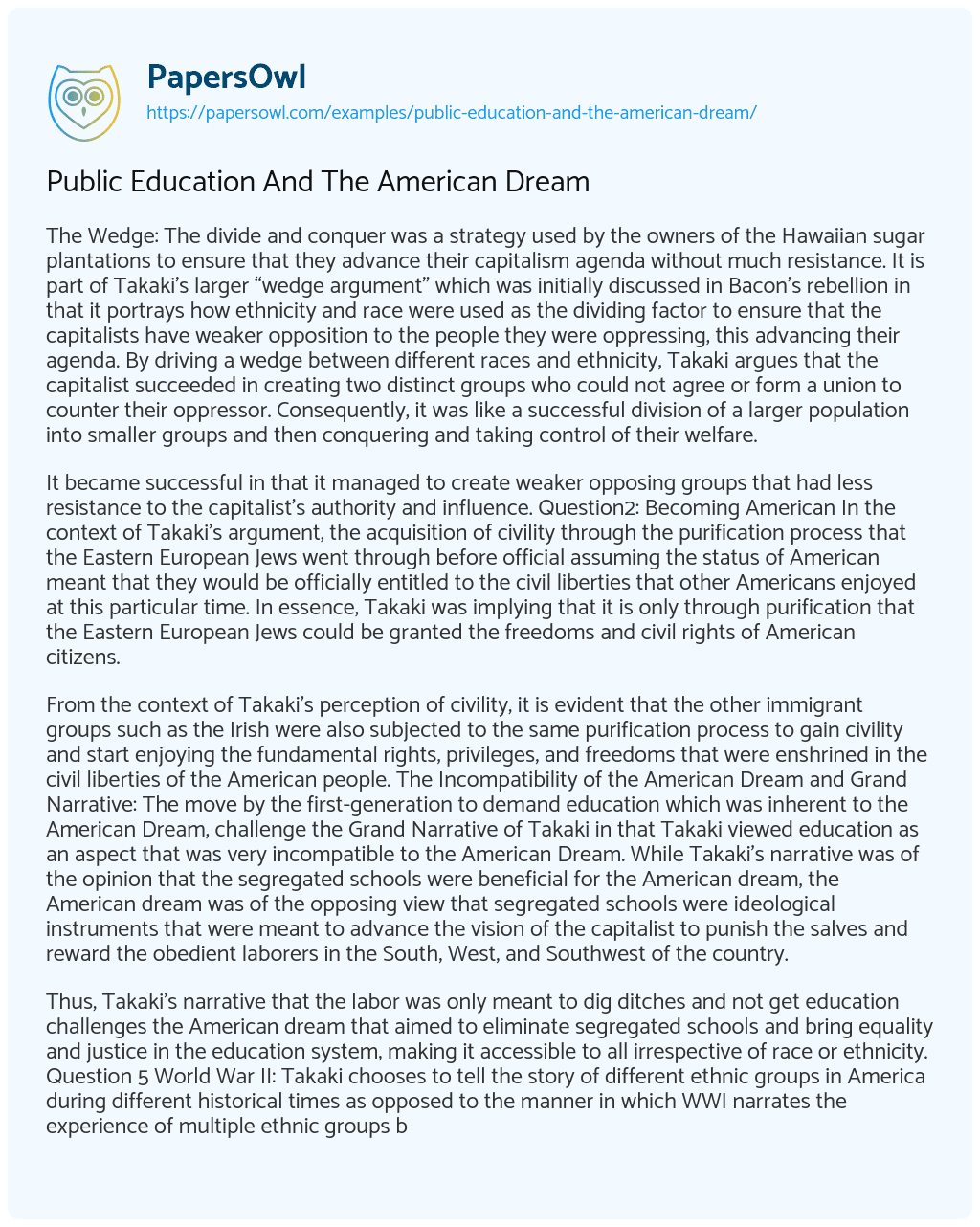 The Wedge: The divide and conquer was a strategy used by the owners of the Hawaiian sugar plantations to ensure that they advance their capitalism agenda without much resistance. It is part of Takaki’s larger “wedge argument” which was initially discussed in Bacon’s rebellion in that it portrays how ethnicity and race were used as the dividing factor to ensure that the capitalists have weaker opposition to the people they were oppressing, this advancing their agenda. By driving a wedge between different races and ethnicity, Takaki argues that the capitalist succeeded in creating two distinct groups who could not agree or form a union to counter their oppressor. Consequently, it was like a successful division of a larger population into smaller groups and then conquering and taking control of their welfare.

It became successful in that it managed to create weaker opposing groups that had less resistance to the capitalist’s authority and influence. Question2: Becoming American In the context of Takaki’s argument, the acquisition of civility through the purification process that the Eastern European Jews went through before official assuming the status of American meant that they would be officially entitled to the civil liberties that other Americans enjoyed at this particular time. In essence, Takaki was implying that it is only through purification that the Eastern European Jews could be granted the freedoms and civil rights of American citizens.

From the context of Takaki’s perception of civility, it is evident that the other immigrant groups such as the Irish were also subjected to the same purification process to gain civility and start enjoying the fundamental rights, privileges, and freedoms that were enshrined in the civil liberties of the American people. The Incompatibility of the American Dream and Grand Narrative: The move by the first-generation to demand education which was inherent to the American Dream, challenge the Grand Narrative of Takaki in that Takaki viewed education as an aspect that was very incompatible to the American Dream. While Takaki’s narrative was of the opinion that the segregated schools were beneficial for the American dream, the American dream was of the opposing view that segregated schools were ideological instruments that were meant to advance the vision of the capitalist to punish the salves and reward the obedient laborers in the South, West, and Southwest of the country.

Thus, Takaki’s narrative that the labor was only meant to dig ditches and not get education challenges the American dream that aimed to eliminate segregated schools and bring equality and justice in the education system, making it accessible to all irrespective of race or ethnicity. Question 5 World War II: Takaki chooses to tell the story of different ethnic groups in America during different historical times as opposed to the manner in which WWI narrates the experience of multiple ethnic groups because he wanted to portray the role of World War II in American history from a different mirror. Consequently, Takaki was interested in revealing the wide divide that existed between the different ethnic groups in America and their inability to unite and face a common problem that was facing them.

The strategy used by Takaki can be interpreted to mean that from a different mirror, the larger argument about the role of World War II in American history was to depict the significance of unity among the different ethnic groups and the need to face a common enemy in order to den the segregation based on race and ethnicity. Immigration in the Twentieth Century In the 20th Century, immigration became a major prerogative of the federal government after New York State appealed protested the high number of immigrants arriving at its shores. Thereafter, significant legal restrictions were enacted to control immigrants into the United States in the early 1920s and the 1960s. The new restriction reformed the process for an immigrant to become naturalized as a legal American Citizen.

The non-immigrants Asians who were already in the U.S at this particular time were equally denied the opportunity to become naturalized into U.S citizenship. The impact of this quota system meant that the immigrants with origin from Northern Europe had more opportunities to be naturalized because they had similar cultures and ethnicities as the Americans. On the other hand, the immigration policies discriminated against the immigrants from eastern and southern Europe who were classified as the new immigrants. However, the immigration policy of 1920 and 1924 was not applicable to the officials of the government and their families, temporary workers and tourists, immigrants with origin from the western hemisphere, any child on a U.S. citizen and any country that had signed a bilateral agreement with the U.S on immigration.

The impacts of this immigration policy was a significant change in the U.S demographics with more immigrants coming into the U.S from Africa, Asia, and Latin America. Consequently, the number of immigrants from Europe greatly declined during this era of immigration policy. The end result was a U.S population with fewer Europeans and more Asian immigrants. The Fourteenth Amendment, American Citizenship, and Due Process The 14th Amendment of the U.S Constitution was one of the major milestones in the U.S reconstruction that gave way to the due process and new pronouncement to the American citizenship. In particular, the 14th amendment addressed the issue of American citizenship and equal protection of the law.

It was an amendment in response to the former slaves after the end of the American Civil War although subject to a strong opposition from the Confederacy. However, the Confederacy had no option but to ratify it before being admitted into the U.S Congress. This amendment was instrumental in integrating the former slaves who had been freed into the legal framework of America. None the less, the opposition to this amendment and the contentious issues highlighted in its major clauses had far-reaching ramifications which would have jeopardized the efforts to achieve Reconstruction. Perhaps the amendment could remain a major trigger of frequent civil wars in present America if measures were not taken to ensure it is fully ratified and implemented. The Fourteenth Amendment was utilized and interpreted in different ways to expand the rights of all Americans in all three of the following areas which are discussed below.

To begin with, the 14th Amendment of the United States Constitution was meant to clarify the manner in which the US citizenship was defined and recognized by the then US constitution, one of the issue was to do with Immigration and Naturalization. Among the ethnic groups that were targeted in this clause were the Asian-Americans and the Native-Americans who were marginalized before the amendment. This provisos was captured in the clause one of the 14th amended t stating that all persons who were born or naturalized in the United States, and become subjected to the US jurisdiction were recognized by the U.S Constitution as legal citizens of the United States and of further as citizens of the respective States where they happened to reside at the time of birth and naturalization.

This clause further made it clear that No State within America could be mandated to enforce any law or enact any legislation that purports to abridge the immunities and privileges of citizens of the United States. The 14th Amendment to the U.S Constitution also enhanced the civil rights movements which brought together the African-Americans and the Latinos. In particular, this amendment provided that No States within America from engaging in any activity that would amount to denying any person within its jurisdiction the right to equal protection of the laws.  Consequently, the amendment ensured that the African-Americans and the Latinos were granted recognition to their civil rights movements and any form of discrimination against them based on their ethnicity and race was prohibited.

Consequently, the African-Americans, Latinos civil rights movement were recognized by the U.S Constitution and granted a representation in the Congress. In particular, the 14th Amendment to the U.S Constitution guaranteed citizenship to all Americans regardless of their ethnicity, race, or previous state of servitude or slavery. It, therefore, guarantee equality and fairness before the law and the right to enjoy all the civil rights as other Americans in the law. Although the 14th amendment to the U.S Constitution does not expressly recognize the right to privacy and social legislation, the provisions of the due process clause provided for social legislation among the US. Citizens.

In particular, it espoused the right to privacy that each U.S Citizen was entitled to and that no American could be subjected to any form of search or any legal action without following the due process. Thus, Also, the clause 1 of the 14th amendment to the U.S Constitution provided that no State within America had the authority to deprive any person the right to own property, the right to liberty, and the right to life without following a due process as provided for by the applicable law. Thus, any state agency, employee or authority was supposed to follow the substantive due process whenever engaging a citizen in any legal process or when subjecting a citizen to any treatment that may undermine their right to autonomy and privacy.

Public Education And The American Dream. (2022, Apr 09). Retrieved from https://papersowl.com/examples/public-education-and-the-american-dream/