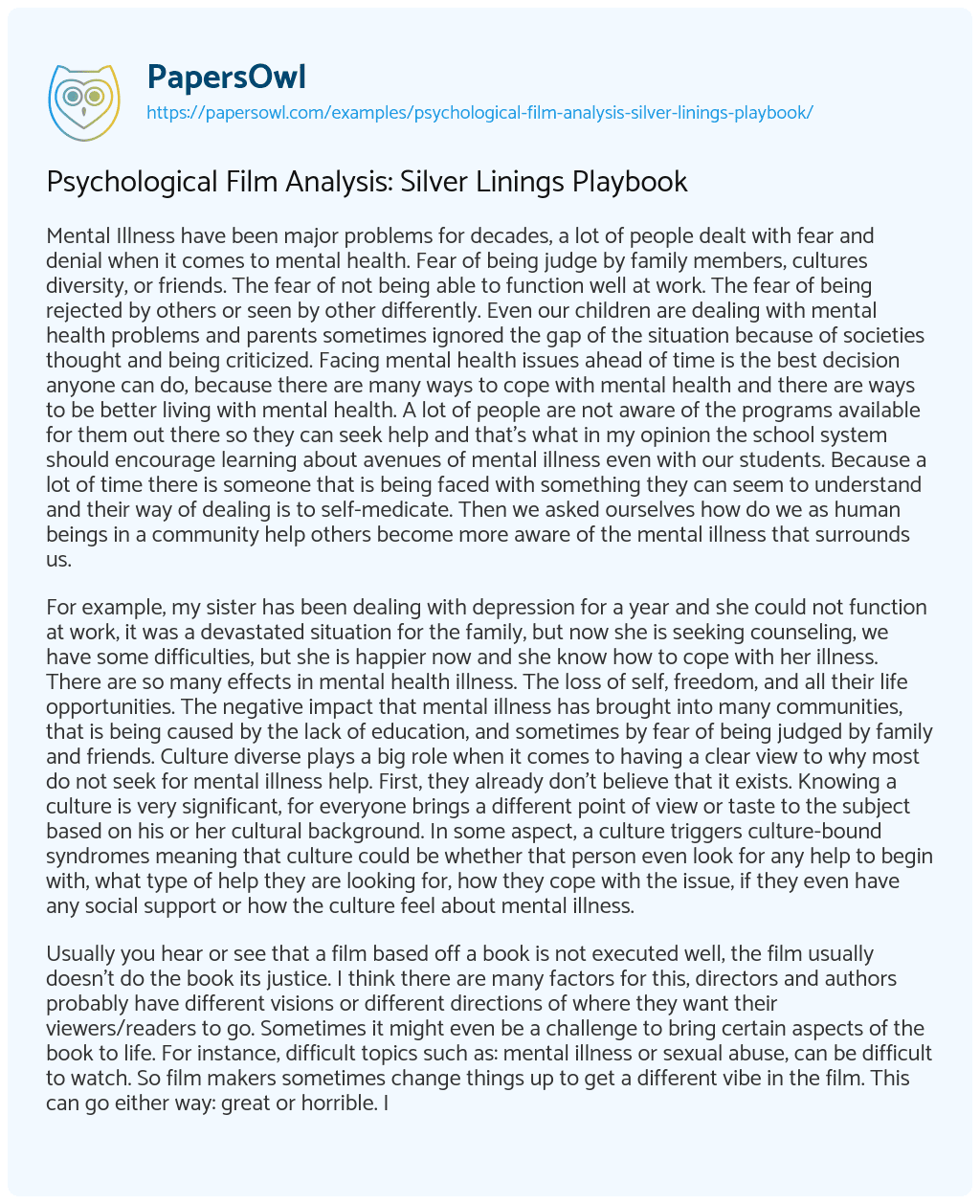 Mental Illness have been major problems for decades, a lot of people dealt with fear and denial when it comes to mental health. Fear of being judge by family members, cultures diversity, or friends. The fear of not being able to function well at work. The fear of being rejected by others or seen by other differently. Even our children are dealing with mental health problems and parents sometimes ignored the gap of the situation because of societies thought and being criticized. Facing mental health issues ahead of time is the best decision anyone can do, because there are many ways to cope with mental health and there are ways to be better living with mental health. A lot of people are not aware of the programs available for them out there so they can seek help and that’s what in my opinion the school system should encourage learning about avenues of mental illness even with our students. Because a lot of time there is someone that is being faced with something they can seem to understand and their way of dealing is to self-medicate. Then we asked ourselves how do we as human beings in a community help others become more aware of the mental illness that surrounds us.

For example, my sister has been dealing with depression for a year and she could not function at work, it was a devastated situation for the family, but now she is seeking counseling, we have some difficulties, but she is happier now and she know how to cope with her illness. There are so many effects in mental health illness. The loss of self, freedom, and all their life opportunities. The negative impact that mental illness has brought into many communities, that is being caused by the lack of education, and sometimes by fear of being judged by family and friends. Culture diverse plays a big role when it comes to having a clear view to why most do not seek for mental illness help. First, they already don’t believe that it exists. Knowing a culture is very significant, for everyone brings a different point of view or taste to the subject based on his or her cultural background. In some aspect, a culture triggers culture-bound syndromes meaning that culture could be whether that person even look for any help to begin with, what type of help they are looking for, how they cope with the issue, if they even have any social support or how the culture feel about mental illness.

Usually you hear or see that a film based off a book is not executed well, the film usually doesn’t do the book its justice. I think there are many factors for this, directors and authors probably have different visions or different directions of where they want their viewers/readers to go. Sometimes it might even be a challenge to bring certain aspects of the book to life. For instance, difficult topics such as: mental illness or sexual abuse, can be difficult to watch. So film makers sometimes change things up to get a different vibe in the film. This can go either way: great or horrible. In the film, Silver Linings Playbook, the changes made, surprisingly, make the film better than the book; don’t get me wrong, I think they are both great, I just feel they tell a different story.

In the book, Pat’s mentality is that he wanted to be kind not right. In the film however, Pat’s motto was Excelsior: if you work hard and do everything right, and stay positive, you have a shot at a silver lining. So in the book he is working on his kindness and how he treats others vs in the film he is willing to do whatever it takes to get his life back where it used to be and have a happily ever after. Both believed that if they worked really hard they would reach their silver lining (get his wife back). I think this is a major difference, it changes the character completely.

Another major difference is that in the book, Pat is released from a mental hospital into his mother’s custody after four years.And he doesn’t remember anything that happened. Like that he almost killed the man he found cheating with his wife and that his wife divorced him while he was in the institute. He doesn’t know he’s been there for years and his wife had divorced him when he was checked in. In the film, he released from the hospital only eight months after and he remembers EVERYTHING!

The novel and the book are both great, essentially they both deliver the idea that if you work hard and you stay positive you have a shot at a silver lining, and that people are not their mental illness and just maybe they understand something we don’t. I just feel that the way the film brought the characters and the story to life is a lot better than the book. Especially the love story with Tiffany Maxwell.