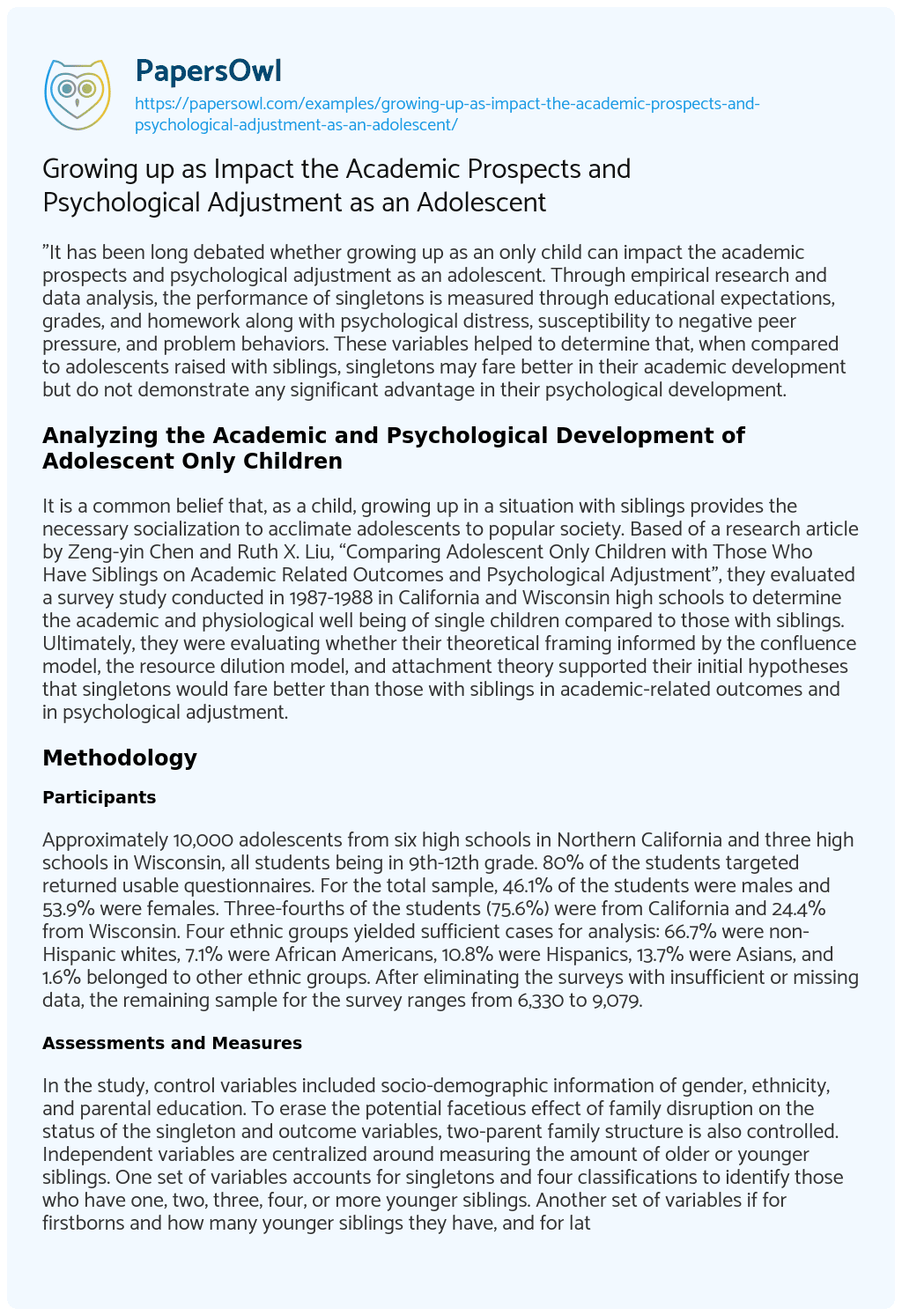 “It has been long debated whether growing up as an only child can impact the academic prospects and psychological adjustment as an adolescent. Through empirical research and data analysis, the performance of singletons is measured through educational expectations, grades, and homework along with psychological distress, susceptibility to negative peer pressure, and problem behaviors. These variables helped to determine that, when compared to adolescents raised with siblings, singletons may fare better in their academic development but do not demonstrate any significant advantage in their psychological development.

Analyzing the Academic and Psychological Development of Adolescent Only Children

It is a common belief that, as a child, growing up in a situation with siblings provides the necessary socialization to acclimate adolescents to popular society. Based of a research article by Zeng-yin Chen and Ruth X. Liu, “Comparing Adolescent Only Children with Those Who Have Siblings on Academic Related Outcomes and Psychological Adjustment”, they evaluated a survey study conducted in 1987-1988 in California and Wisconsin high schools to determine the academic and physiological well being of single children compared to those with siblings. Ultimately, they were evaluating whether their theoretical framing informed by the confluence model, the resource dilution model, and attachment theory supported their initial hypotheses that singletons would fare better than those with siblings in academic-related outcomes and in psychological adjustment.

Approximately 10,000 adolescents from six high schools in Northern California and three high schools in Wisconsin, all students being in 9th-12th grade. 80% of the students targeted returned usable questionnaires. For the total sample, 46.1% of the students were males and 53.9% were females. Three-fourths of the students (75.6%) were from California and 24.4% from Wisconsin. Four ethnic groups yielded sufficient cases for analysis: 66.7% were non-Hispanic whites, 7.1% were African Americans, 10.8% were Hispanics, 13.7% were Asians, and 1.6% belonged to other ethnic groups. After eliminating the surveys with insufficient or missing data, the remaining sample for the survey ranges from 6,330 to 9,079.

In the study, control variables included socio-demographic information of gender, ethnicity, and parental education. To erase the potential facetious effect of family disruption on the status of the singleton and outcome variables, two-parent family structure is also controlled. Independent variables are centralized around measuring the amount of older or younger siblings. One set of variables accounts for singletons and four classifications to identify those who have one, two, three, four, or more younger siblings. Another set of variables if for firstborns and how many younger siblings they have, and for later-borns and how many siblings they have. Dependent variables included three elements to measure academic outcomes and three other elements to tap psychological adjustment.

Variables to measure academic outcomes concentrated on educational expectations, self-reported grades, and homework. Regarding educational expectations, respondents choose among six levels: 1 = leave school as soon as possible; 2 = finish high school; 3 = get some vocational or college training; 4 = finish a two-year community college degree; 5 = finish college with a four-year college degree; 6 = finish college and take further training. Self-reported grades were measured on a four-item index that asked the respondents the average grade they received for each of the following four courses: math, English, science, and social science, with the response categories of A, B, C, D, and F. Homework was measured by a two-item index that asked the amount of time the respondents currently put into homework each week for the two main classes: math and English. The indicators used in this survey was deemed valid by previous research.

Psychological adjustment was measured with regards to psychological distress, susceptibility to negative peer pressure, and problem behaviors. Psychological distress included a six-item index sourced from the Depression Scale of the Center for Epidemiologic Studies. These items ask how often in a month one feels nervous or worried, “low,” depressed, tense, irritable, alone, overtired, having trouble sleeping, losing appetite, or eating too much. The four response categories are 1 = never, 2 = once, 3 = twice, and 4 = three times or more. Susceptibility to negative peer pressure is a five-item index: (a) “your friends want you to have a party this weekend because your parents won’t be home;” (b) “while shopping your friends decide to take some clothing without paying for it;” (c) “your friends decide to study from a test answer sheet that was found before the test;” (d) “you and your friends find a car with keys in the door and they decide to take it for a ride;” (e) “your friends decide to buy fake IDs from someone.” The four response categories for complying with pressure from friends range from 1 = “definitely would not” to 4 = “definitely would. Finally, problem behaviors were measured using a seven-item index: how often one ran away from home, took something of value from another person, got in trouble with the police, got into a physical fight at school, carried a weapon to school, and purposely damaged school property. The response categories were: 1 = never, 2 = once or twice, 3 = several times, and 4 = often.

This study contributes to the existing research in debunking the myth on the stereotypical view about singletons. While singletons do not differ from those who have siblings in psychosocial adjustment, they are likely to enjoy some measurable advantages over later-borns from medium to large families in academic-related outcomes.

For all three academic variables- educational expectations, homework, and grades- there are no found significant differences between singletons and firstborns who have a number of younger siblings. When compared to later-born children in small families, there is also no largely observable difference; however, singletons are found to fare better than later-born children in large families in reporting higher education expectations, getting better grades, and spending more time on homework. These results are consistent with the theoretical framework that Chen and Liu introduced at the introduction of their paper: the confluence model, the resource dilution model, and attachment theory. Specifically, for the outcome variable homework, non-singletons with one or two siblings were not different from singletons in the amount of time reported working. The only significant effects are from later-borns with three or more siblings, who reported spending less time than singletons on homework. As a whole, singletons have proven to fare better in regards to their academic prospects, which proves their initial hypotheses correct.

The psychological data reports unstandardized and standardized regression of the variables for psychosocial outcomes. After taking sociodemographic background variables, firstborn or later-borns regardless of their sibling size did not differ from singletons in psychological distress, susceptibility to negative peer pressure, and problem behavior. Singletons manage about the same in handling psychological adjustment, therefore proving their initial hypotheses incorrect in that singletons would not fare better than those with siblings.

According to the research gathered, only around 5% of Americans said that they would only have a single child, whereas the majority of Americans who want to have children answered that they would want to have multiple. In many cases, this reasoning can be attributed to the stigma that surrounds only children in that they are socially inadequate or may be behind their peers in their development. If anything can be proven by this study, it is that having only a single child would not hurt the development of your child, if anything it could benefit their academic prospects. By dedicating resources to a single resource and being available to dedicate the full parental guidance towards a single child during their formative years could drastically benefit their psychological maturity when they do not have an older sibling to help them. Dedicating time to having a single child rather than introducing multiple children into a household over a short period of time could benefit their development, and if anything they will not experience a drastic deficit in maturity due to their singleton status.

It is a prevalent misconception that a person can always tell if someone is an only child due to the fact that they lack a certain degree of social adequacy and overall maturity. Despite this myth, singletons actually fare as well as other adolescents during their mercurial developmental stage. The fact that only children are not at some enormous disadvantage based on the decision of their parents to only have a single child is reassuring as they are likely to grow into a capable and responsible citizen, just like those who grow up with siblings. To identify the extended success of singletons into their adult lives and future careers, further research would be necessary and beneficial to the field of study as a whole. Future research could shed light on whether singletons’ advantages in the academic arena during their childhood years and adolescence, especially when considering where they land socioeconomically. Another social aspect that could be evaluated is if their lack of sibling interaction may influence their marital relationships and parenting style and decision making.”

Growing up as Impact the Academic Prospects and Psychological Adjustment as an Adolescent. (2021, May 10). Retrieved from https://papersowl.com/examples/growing-up-as-impact-the-academic-prospects-and-psychological-adjustment-as-an-adolescent/

The Effect of Household Abuse on Academic Achievement Children

The Effects of Same-Sex Parenting on Children and Adolescent