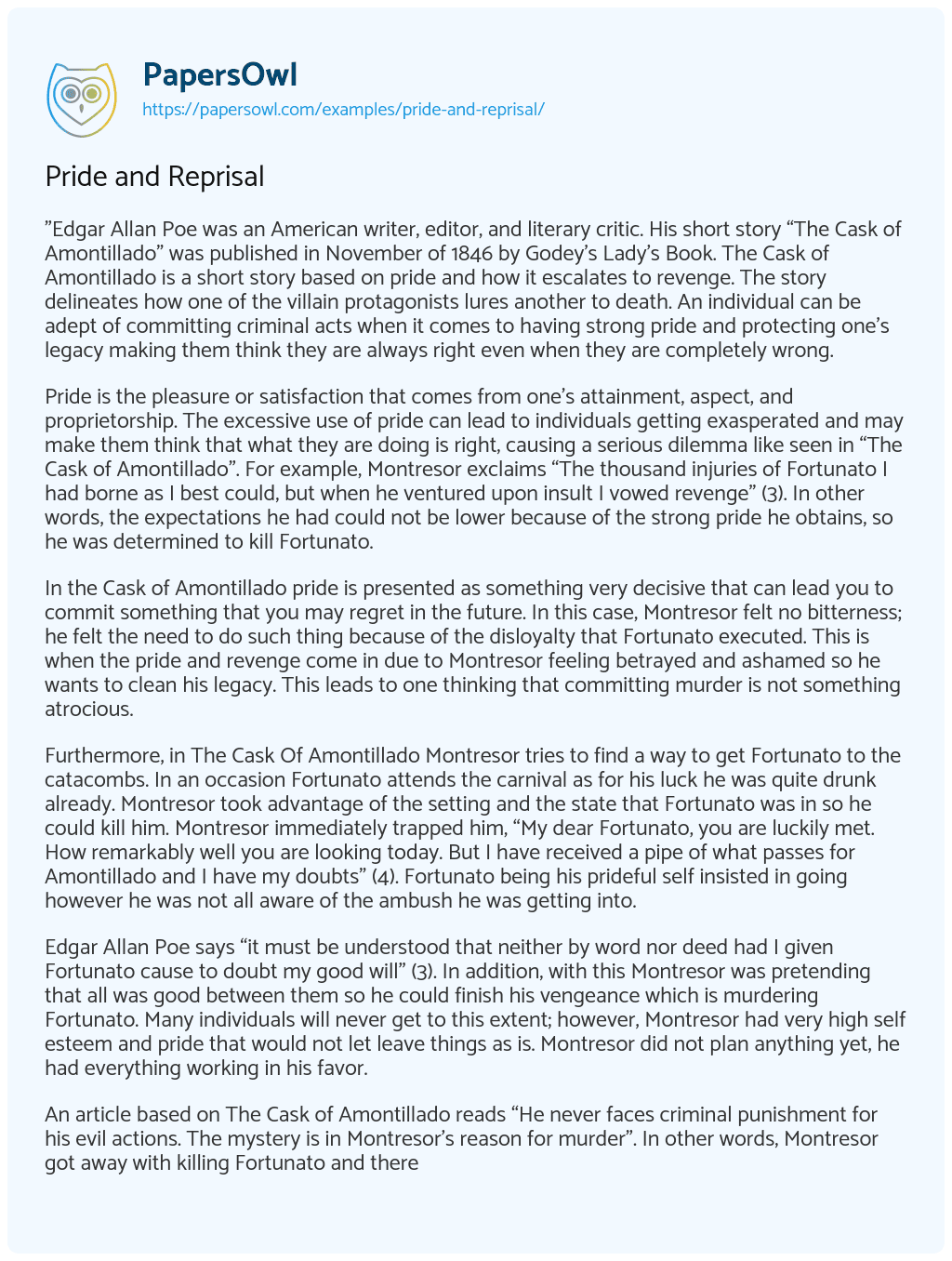 “Edgar Allan Poe was an American writer, editor, and literary critic. His short story “The Cask of Amontillado” was published in November of 1846 by Godey’s Lady’s Book. The Cask of Amontillado is a short story based on pride and how it escalates to revenge. The story delineates how one of the villain protagonists lures another to death. An individual can be adept of committing criminal acts when it comes to having strong pride and protecting one’s legacy making them think they are always right even when they are completely wrong.

Pride is the pleasure or satisfaction that comes from one’s attainment, aspect, and proprietorship. The excessive use of pride can lead to individuals getting exasperated and may make them think that what they are doing is right, causing a serious dilemma like seen in “The Cask of Amontillado”. For example, Montresor exclaims “The thousand injuries of Fortunato I had borne as I best could, but when he ventured upon insult I vowed revenge” (3). In other words, the expectations he had could not be lower because of the strong pride he obtains, so he was determined to kill Fortunato.

In the Cask of Amontillado pride is presented as something very decisive that can lead you to commit something that you may regret in the future. In this case, Montresor felt no bitterness; he felt the need to do such thing because of the disloyalty that Fortunato executed. This is when the pride and revenge come in due to Montresor feeling betrayed and ashamed so he wants to clean his legacy. This leads to one thinking that committing murder is not something atrocious.

Furthermore, in The Cask Of Amontillado Montresor tries to find a way to get Fortunato to the catacombs. In an occasion Fortunato attends the carnival as for his luck he was quite drunk already. Montresor took advantage of the setting and the state that Fortunato was in so he could kill him. Montresor immediately trapped him, “My dear Fortunato, you are luckily met. How remarkably well you are looking today. But I have received a pipe of what passes for Amontillado and I have my doubts” (4). Fortunato being his prideful self insisted in going however he was not all aware of the ambush he was getting into.

Edgar Allan Poe says “it must be understood that neither by word nor deed had I given Fortunato cause to doubt my good will” (3). In addition, with this Montresor was pretending that all was good between them so he could finish his vengeance which is murdering Fortunato. Many individuals will never get to this extent; however, Montresor had very high self esteem and pride that would not let leave things as is. Montresor did not plan anything yet, he had everything working in his favor.

An article based on The Cask of Amontillado reads “He never faces criminal punishment for his evil actions. The mystery is in Montresor’s reason for murder”. In other words, Montresor got away with killing Fortunato and there was no regret from his end. Montresor really took advantage of the setting and the state that Fortunato was in. The carnival was the perfect place to commit the crime because no one would hear him scream. It takes a criminal mastermind and someone with high pride to do such incriminating thing.

Moreover, Fortunato also played a huge role in his murder because of how he prided himself with his devotee for wine. Montresor was aware of Fortunato’s weakness so he used it against him to lure him into his trap. The article Cask of Amontillado and Pride Essay says “Fortunato had no reason to demean Luchesi except to keep his own pride intact”. This portrayed that Fortunato wanted to reveal himself more skillful than Luchesi and due to his strong pride, he accompanied Montresor into the Catacombs.

The Cask of Amontillado shows how individuals are being selfish and prideful within themselves and how this may lead to consequences. For example, in The Cask of Amontillado how Montresor holds his pride up high and concentrates on cleaning his family’s name so he continues on to killing Fortunato. Also, Fortunato and the pride he has towards being a wine expert leads him to his death. Pride will never lead you to any good we only set ourselves up for a life full of misery.

For closure, The Cask of Amontillado represents the pride that two individuals hold and the outcomes it brings. The pride that was introduced in this story was strong and incriminating. The strong self-esteem and pride that Montresor had lead him to perpetrate murder however he showed no regret in what he did. Pride and Revenge are no good and individuals should be aware of what this may lead them to do so they think twice about having such robust pride and before they perform compromising actions.”

Revenge and Foreshadowing in the Cask of Amontillado