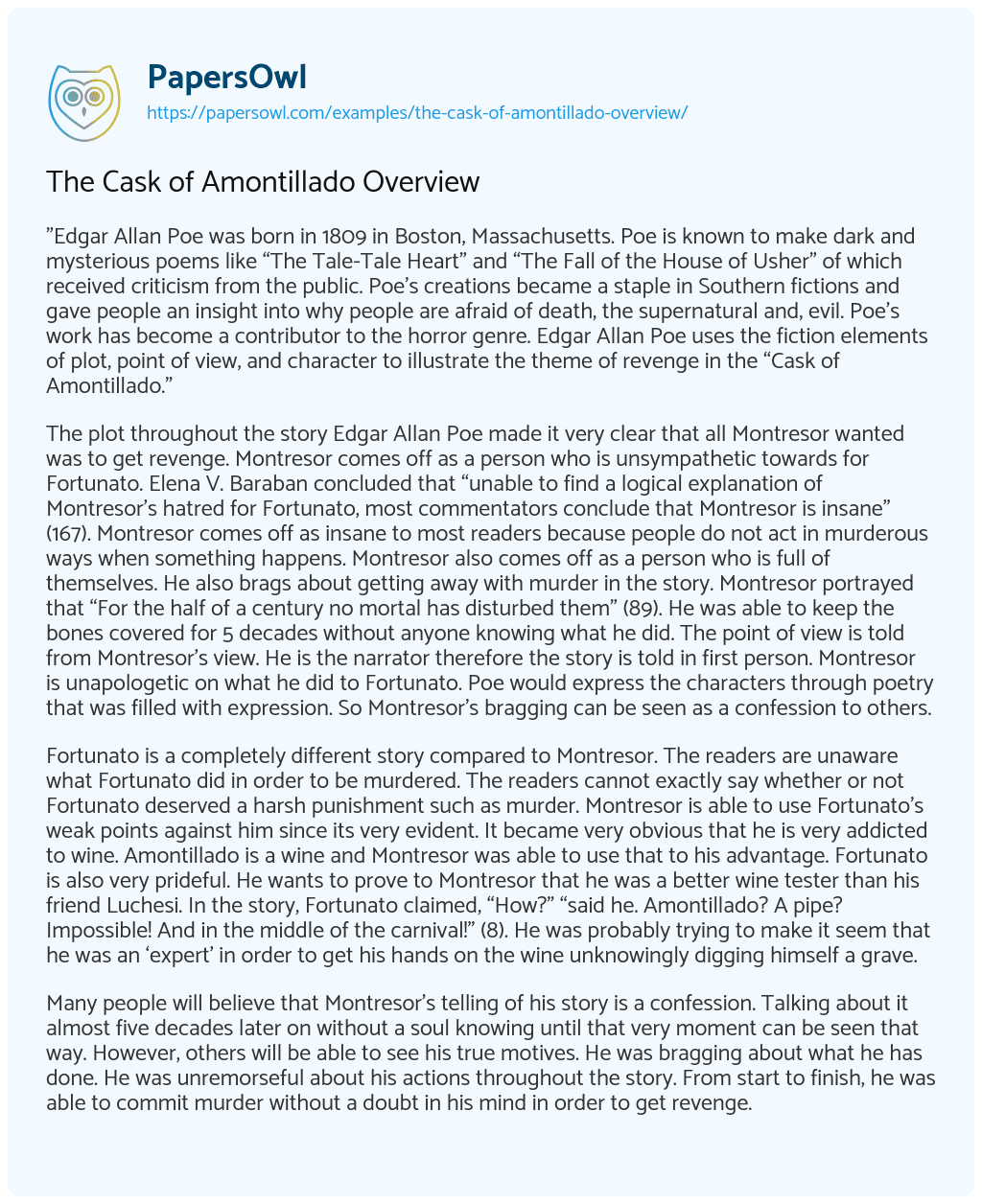 “Edgar Allan Poe was born in 1809 in Boston, Massachusetts. Poe is known to make dark and mysterious poems like “The Tale-Tale Heart” and “The Fall of the House of Usher” of which received criticism from the public. Poe’s creations became a staple in Southern fictions and gave people an insight into why people are afraid of death, the supernatural and, evil. Poe’s work has become a contributor to the horror genre. Edgar Allan Poe uses the fiction elements of plot, point of view, and character to illustrate the theme of revenge in the “Cask of Amontillado.”

The plot throughout the story Edgar Allan Poe made it very clear that all Montresor wanted was to get revenge. Montresor comes off as a person who is unsympathetic towards for Fortunato. Elena V. Baraban concluded that “unable to find a logical explanation of Montresor’s hatred for Fortunato, most commentators conclude that Montresor is insane” (167). Montresor comes off as insane to most readers because people do not act in murderous ways when something happens. Montresor also comes off as a person who is full of themselves. He also brags about getting away with murder in the story. Montresor portrayed that “For the half of a century no mortal has disturbed them” (89). He was able to keep the bones covered for 5 decades without anyone knowing what he did. The point of view is told from Montresor’s view. He is the narrator therefore the story is told in first person. Montresor is unapologetic on what he did to Fortunato. Poe would express the characters through poetry that was filled with expression. So Montresor’s bragging can be seen as a confession to others.

Fortunato is a completely different story compared to Montresor. The readers are unaware what Fortunato did in order to be murdered. The readers cannot exactly say whether or not Fortunato deserved a harsh punishment such as murder. Montresor is able to use Fortunato’s weak points against him since its very evident. It became very obvious that he is very addicted to wine. Amontillado is a wine and Montresor was able to use that to his advantage. Fortunato is also very prideful. He wants to prove to Montresor that he was a better wine tester than his friend Luchesi. In the story, Fortunato claimed, “How?” “said he. Amontillado? A pipe? Impossible! And in the middle of the carnival!” (8). He was probably trying to make it seem that he was an ‘expert’ in order to get his hands on the wine unknowingly digging himself a grave.

Many people will believe that Montresor’s telling of his story is a confession. Talking about it almost five decades later on without a soul knowing until that very moment can be seen that way. However, others will be able to see his true motives. He was bragging about what he has done. He was unremorseful about his actions throughout the story. From start to finish, he was able to commit murder without a doubt in his mind in order to get revenge.

In the story, The Cask of Amontillado by Edgar Allan Poe, used the fiction elements of plot, point of view and character to illustrate the theme of revenge. The reader can use Montresor’s actions in order to see that we should stop and think about our actions. Violence is never the answer in order to solve your problems. People should be able to reflect on our past actions and not regret things that we’ve done. If Montresor had not said anything about Fortunato’s murder, then he possibly would not have to suffer the consequences. Just because Montresor got away scot free does not mean that you or others will.”

The Cask of Amontillado Overview. (2021, Jun 17). Retrieved from https://papersowl.com/examples/the-cask-of-amontillado-overview/

Murder in in “The Cask of Amontillado”