Revenge and Foreshadowing in the Cask of Amontillado 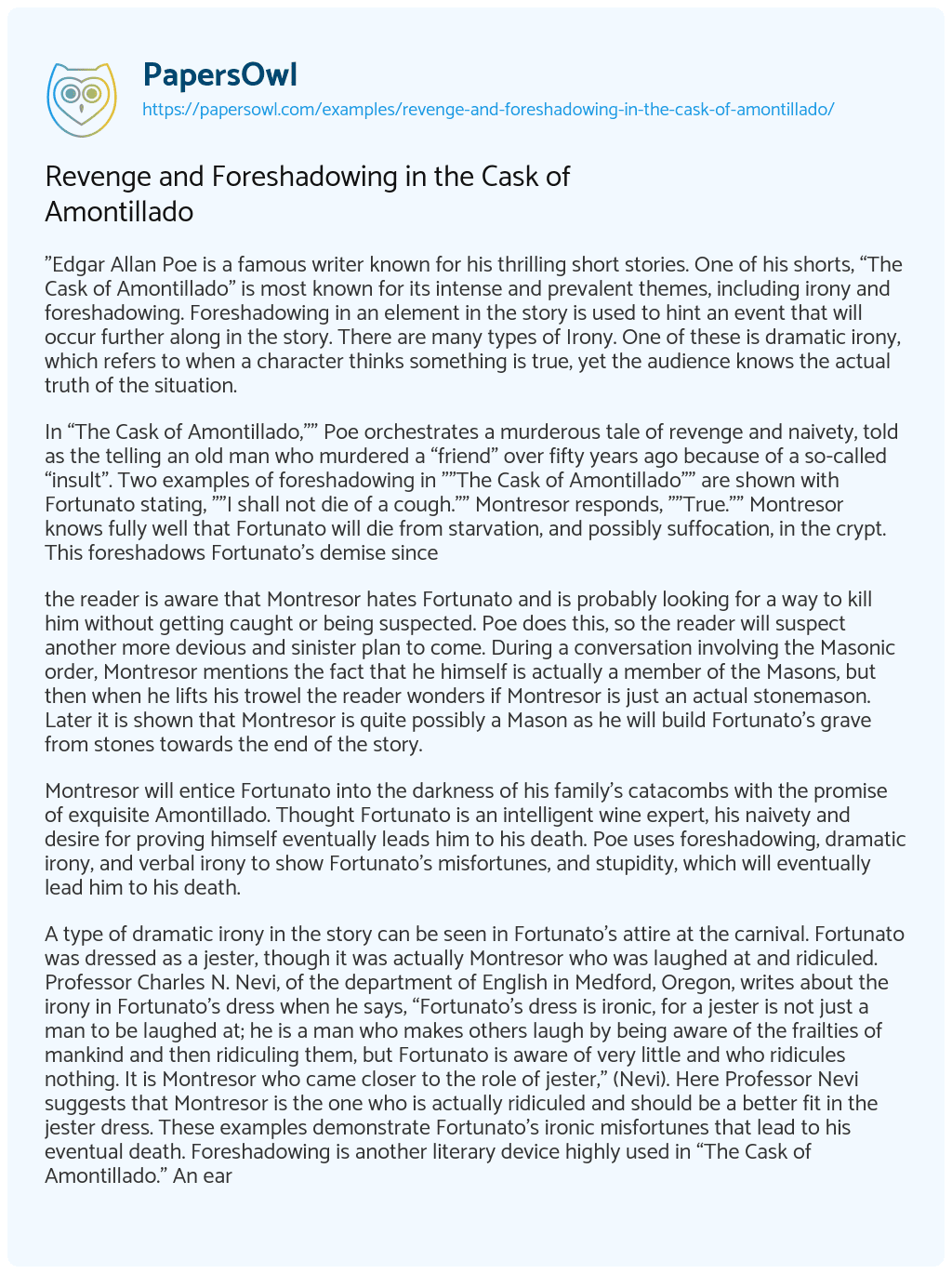 “Edgar Allan Poe is a famous writer known for his thrilling short stories. One of his shorts, “The Cask of Amontillado” is most known for its intense and prevalent themes, including irony and foreshadowing. Foreshadowing in an element in the story is used to hint an event that will occur further along in the story. There are many types of Irony. One of these is dramatic irony, which refers to when a character thinks something is true, yet the audience knows the actual truth of the situation.

In “The Cask of Amontillado,”” Poe orchestrates a murderous tale of revenge and naivety, told as the telling an old man who murdered a “friend” over fifty years ago because of a so-called “insult”. Two examples of foreshadowing in “”The Cask of Amontillado”” are shown with Fortunato stating, “”I shall not die of a cough.”” Montresor responds, “”True.”” Montresor knows fully well that Fortunato will die from starvation, and possibly suffocation, in the crypt. This foreshadows Fortunato’s demise since

the reader is aware that Montresor hates Fortunato and is probably looking for a way to kill him without getting caught or being suspected. Poe does this, so the reader will suspect another more devious and sinister plan to come. During a conversation involving the Masonic order, Montresor mentions the fact that he himself is actually a member of the Masons, but then when he lifts his trowel the reader wonders if Montresor is just an actual stonemason. Later it is shown that Montresor is quite possibly a Mason as he will build Fortunato’s grave from stones towards the end of the story.

A type of dramatic irony in the story can be seen in Fortunato’s attire at the carnival. Fortunato was dressed as a jester, though it was actually Montresor who was laughed at and ridiculed. Professor Charles N. Nevi, of the department of English in Medford, Oregon, writes about the irony in Fortunato’s dress when he says, “Fortunato’s dress is ironic, for a jester is not just a man to be laughed at; he is a man who makes others laugh by being aware of the frailties of mankind and then ridiculing them, but Fortunato is aware of very little and who ridicules nothing. It is Montresor who came closer to the role of jester,” (Nevi). Here Professor Nevi suggests that Montresor is the one who is actually ridiculed and should be a better fit in the jester dress. These examples demonstrate Fortunato’s ironic misfortunes that lead to his eventual death. Foreshadowing is another literary device highly used in “The Cask of Amontillado.” An early instance of foreshadowing is seen in the title “The Cask of Amontillado.” In the title, the word “Cask” closely resembles the word casket which refers to where a person lays after death. The title quickly draws attention that the story involves the death of a person. The reader is expecting Fortunato to perish during the story.

Montresor put a tremendous amount of planning into Fortunato’s murder. When Montresor encounters Fortunato on the street he twice pretends to believe that Fortunato has an “”engagement,”” that is, that Fortunato is expected somewhere. Montresor would not like to lure Fortunato to his palazzo if, for example, he were expected at home. His wife might send servants out looking for him and asking questions, and people on the streets might remember that he had been with Montresor when last seen.

But since everybody had been drinking, it was likely that nobody would remember much of anything the next day, or the day after that, when it was finally realized that Fortunato was missing. Montresor gets no response from his intended victim the first time he pretends to think Fortunato has an “”engagement, but the second time he tries the same ploy he gets the answer he wanted. The reader knows full well that Montresor hates Fortunato and is probably looking for a way to kill him without getting caught or suspected. Because the carnival is such a public place, Fortunato believes it is a casual encounter between friends. The celebration has freed Fortunato of his inhibitions, making this the ideal time for Montresor to follow through on his plans for Fortunato’s demise.

The other location of “The Cask of Amontillado is the Montresor family catacombs. Fortunato is enveloped by death and despair. The surroundings are very ominous, but he is drunk and cannot see his grim fate being spelled out for him until it is too late. Later, when Fortunato finds himself chained inside a narrow recess in the rock wall of the catacombs, he tries to plant seeds of doubt in Montresor’s mind by suggesting that he actually is expected at home.”

Revenge and Foreshadowing in the Cask of Amontillado. (2021, Jun 17). Retrieved from https://papersowl.com/examples/revenge-and-foreshadowing-in-the-cask-of-amontillado/