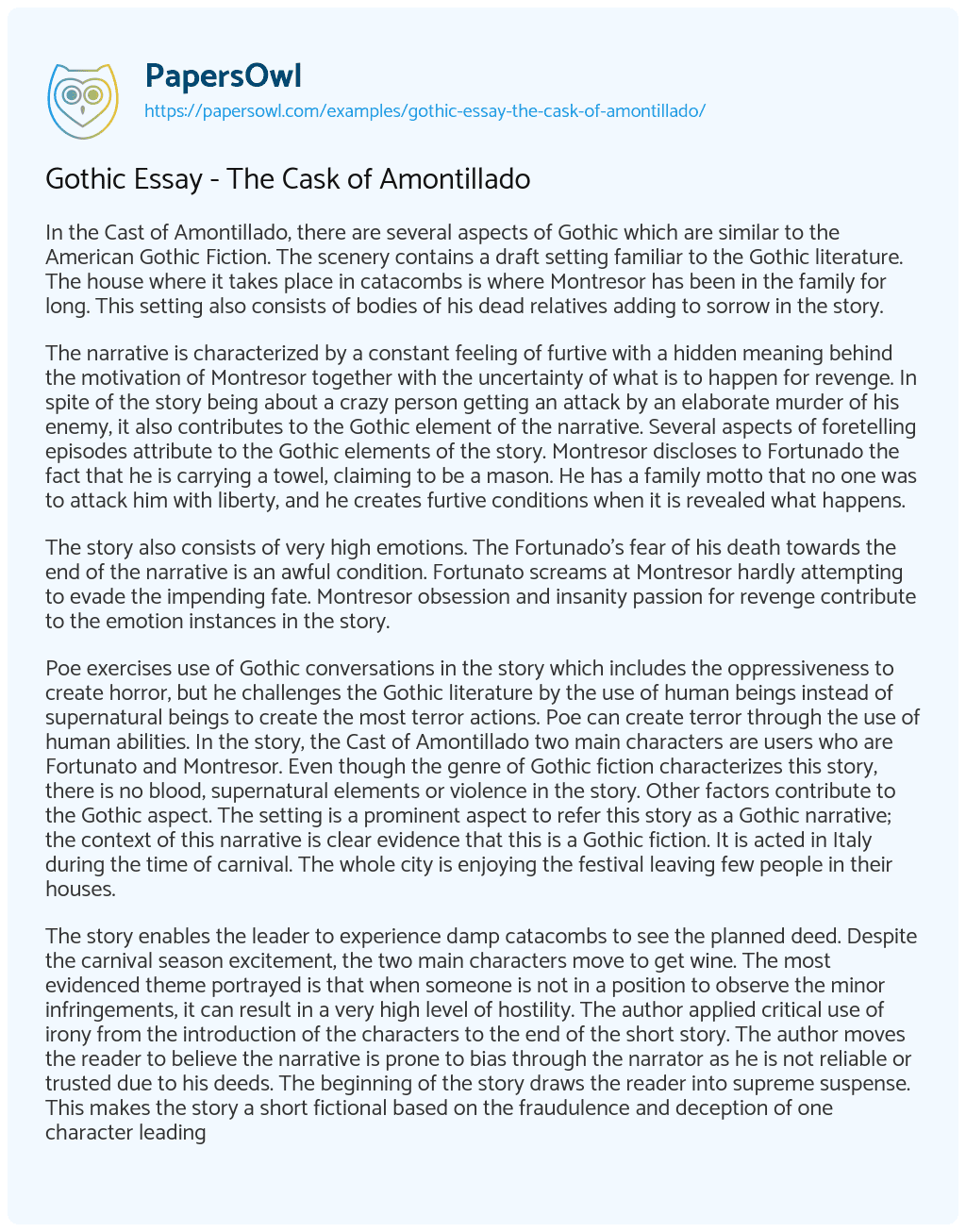 In the Cast of Amontillado, there are several aspects of Gothic which are similar to the American Gothic Fiction. The scenery contains a draft setting familiar to the Gothic literature. The house where it takes place in catacombs is where Montresor has been in the family for long. This setting also consists of bodies of his dead relatives adding to sorrow in the story.

The narrative is characterized by a constant feeling of furtive with a hidden meaning behind the motivation of Montresor together with the uncertainty of what is to happen for revenge. In spite of the story being about a crazy person getting an attack by an elaborate murder of his enemy, it also contributes to the Gothic element of the narrative. Several aspects of foretelling episodes attribute to the Gothic elements of the story. Montresor discloses to Fortunado the fact that he is carrying a towel, claiming to be a mason. He has a family motto that no one was to attack him with liberty, and he creates furtive conditions when it is revealed what happens.

The story also consists of very high emotions. The Fortunado’s fear of his death towards the end of the narrative is an awful condition. Fortunato screams at Montresor hardly attempting to evade the impending fate. Montresor obsession and insanity passion for revenge contribute to the emotion instances in the story.

Poe exercises use of Gothic conversations in the story which includes the oppressiveness to create horror, but he challenges the Gothic literature by the use of human beings instead of supernatural beings to create the most terror actions. Poe can create terror through the use of human abilities. In the story, the Cast of Amontillado two main characters are users who are Fortunato and Montresor. Even though the genre of Gothic fiction characterizes this story, there is no blood, supernatural elements or violence in the story. Other factors contribute to the Gothic aspect. The setting is a prominent aspect to refer this story as a Gothic narrative; the context of this narrative is clear evidence that this is a Gothic fiction. It is acted in Italy during the time of carnival. The whole city is enjoying the festival leaving few people in their houses.

The story enables the leader to experience damp catacombs to see the planned deed. Despite the carnival season excitement, the two main characters move to get wine. The most evidenced theme portrayed is that when someone is not in a position to observe the minor infringements, it can result in a very high level of hostility. The author applied critical use of irony from the introduction of the characters to the end of the short story. The author moves the reader to believe the narrative is prone to bias through the narrator as he is not reliable or trusted due to his deeds. The beginning of the story draws the reader into supreme suspense. This makes the story a short fictional based on the fraudulence and deception of one character leading to the fall and death of the other.

The story mainly revolves around the two characters. Fortunato who is a wine expert falls in the trap to a fate resulting from trickery and deception in the carefree carnival festival. The other aspect is Montressor besides him being the narrator with a dark and envious heart. However, the author skillfully disguises his real character.

Gothic Essay - The Cask of Amontillado. (2021, Mar 26). Retrieved from https://papersowl.com/examples/gothic-essay-the-cask-of-amontillado/

The Cask of Amontillado Analysis Essay