Plato’s Allegory of the Cave 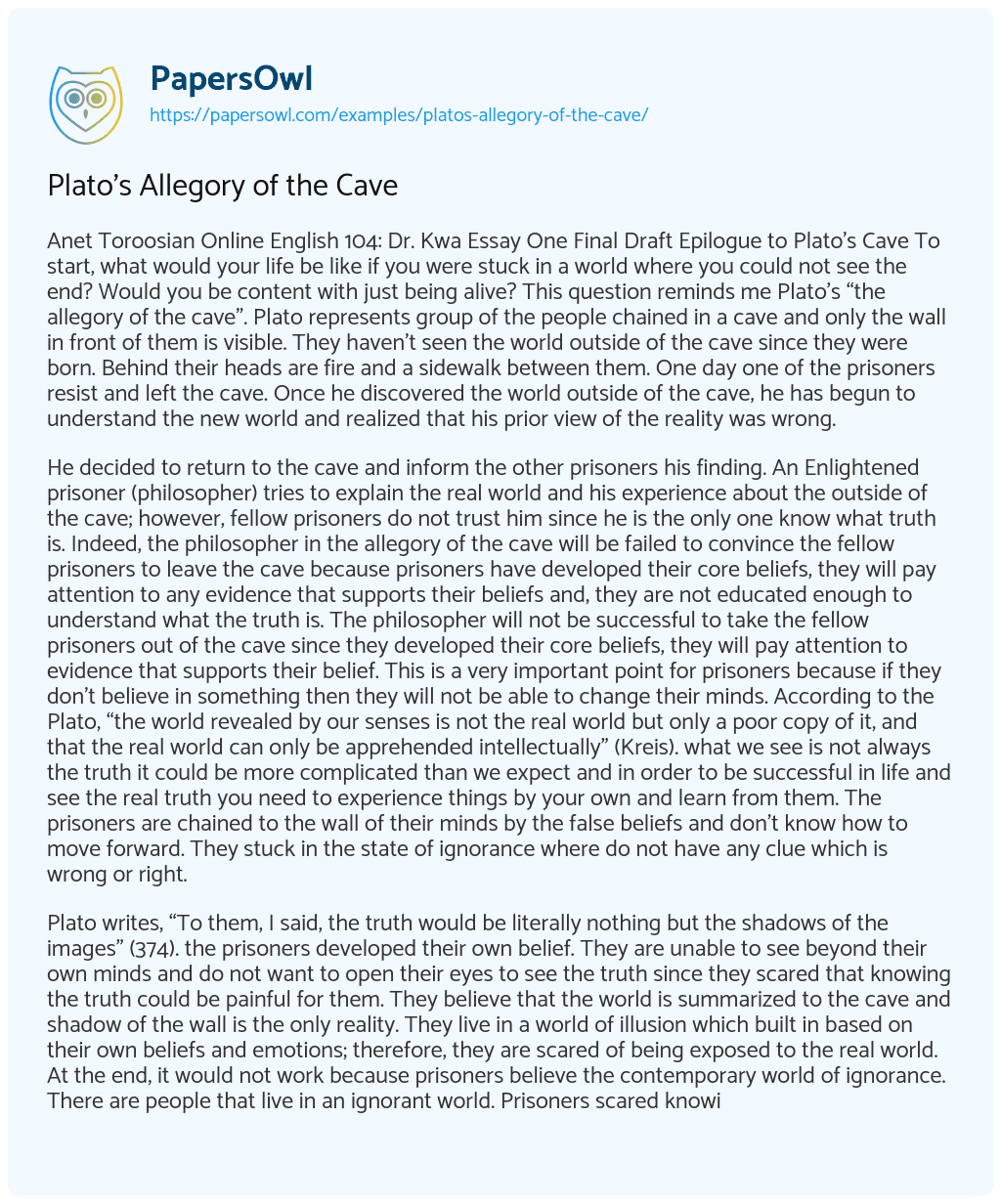 Anet Toroosian Online English 104: Dr. Kwa Essay One Final Draft Epilogue to Plato’s Cave To start, what would your life be like if you were stuck in a world where you could not see the end? Would you be content with just being alive? This question reminds me Plato’s “the allegory of the cave”. Plato represents group of the people chained in a cave and only the wall in front of them is visible. They haven’t seen the world outside of the cave since they were born. Behind their heads are fire and a sidewalk between them. One day one of the prisoners resist and left the cave. Once he discovered the world outside of the cave, he has begun to understand the new world and realized that his prior view of the reality was wrong.

He decided to return to the cave and inform the other prisoners his finding. An Enlightened prisoner (philosopher) tries to explain the real world and his experience about the outside of the cave; however, fellow prisoners do not trust him since he is the only one know what truth is. Indeed, the philosopher in the allegory of the cave will be failed to convince the fellow prisoners to leave the cave because prisoners have developed their core beliefs, they will pay attention to any evidence that supports their beliefs and, they are not educated enough to understand what the truth is. The philosopher will not be successful to take the fellow prisoners out of the cave since they developed their core beliefs, they will pay attention to evidence that supports their belief. This is a very important point for prisoners because if they don’t believe in something then they will not be able to change their minds. According to the Plato, “the world revealed by our senses is not the real world but only a poor copy of it, and that the real world can only be apprehended intellectually” (Kreis). what we see is not always the truth it could be more complicated than we expect and in order to be successful in life and see the real truth you need to experience things by your own and learn from them. The prisoners are chained to the wall of their minds by the false beliefs and don’t know how to move forward. They stuck in the state of ignorance where do not have any clue which is wrong or right.

Plato writes, “To them, I said, the truth would be literally nothing but the shadows of the images” (374). the prisoners developed their own belief. They are unable to see beyond their own minds and do not want to open their eyes to see the truth since they scared that knowing the truth could be painful for them. They believe that the world is summarized to the cave and shadow of the wall is the only reality. They live in a world of illusion which built in based on their own beliefs and emotions; therefore, they are scared of being exposed to the real world. At the end, it would not work because prisoners believe the contemporary world of ignorance. There are people that live in an ignorant world. Prisoners scared knowing the truth and limit themselves from education, desire and stay in the world of Forms(fantasy). In fact, there are people in society can ignore one’s Idea, they chose an easier path in life and see an only partial side of it- a shadow.

The philosopher fails to convince prisoners to leave the cave because they are not educated enough to understand what the truth is and how it works. Plato writes, “if I am right, certain professors of education must be wrong when they say that they can put a knowledge into the soul which was not there before, like sight into blind eyes” (376). If you want to see how things works you must first be able to see the world by you own eyes. He says, people have to desire to learn, no one can get them education and force them to learn. Once you are willing to learn you will be able to see the world of ideas. In order to become enlightened person we need to learn from others and the only way out of ignorance is through experience things. Plato writes, “whether true or false, my opinion is that in the world of knowledge the idea of good appears last of all and is seen only with an effort” (376). In other words, education is a key to success and can help one be more acknowledge about surrounding. One would be able to know how to interact with others make a decision and ruin one’s life in a positive matter; however, it could be painful sometimes and can have many ups and down in its process. Lastly, in order for prisoners to understand the real world, they need to educate themselves and open up their eyes to see the truth. Once they gain that knowledge, they can transfer it to others. Without education, you would dwell in darkness and there is no hope one can reach their full potential. Only educated and extraordinary people will find out the true meaning of the world.

In conclusion, Philosopher would not be able to help his fellow prisoners since each person has its own perspective to see the world and illiterate people are unable to see nature of the reality. Plato believed that people are born certain characteristic which they learn to survive and become good citizen. Sometimes the reality is not what we see, if you take a risk and break your comfort zone no matter how painful would be, the final reward would worth it. We live in a society where there are enlightened people and ignorance ones. Everyone is free whatever he or she wants without any restriction or limitation. People live in nature that they feel safe and comfortable about it. Allegory of the cave is a symbol for our society. If you surrounded by darkness you would not be able to see anything but yourself and the only way to get closer to reality you must face your fears and let yourself be free from the chain of ignorance.

Plato's Allegory of the Cave. (2021, Mar 01). Retrieved from https://papersowl.com/examples/platos-allegory-of-the-cave/

Story of Plato’s Allegory of the Cave