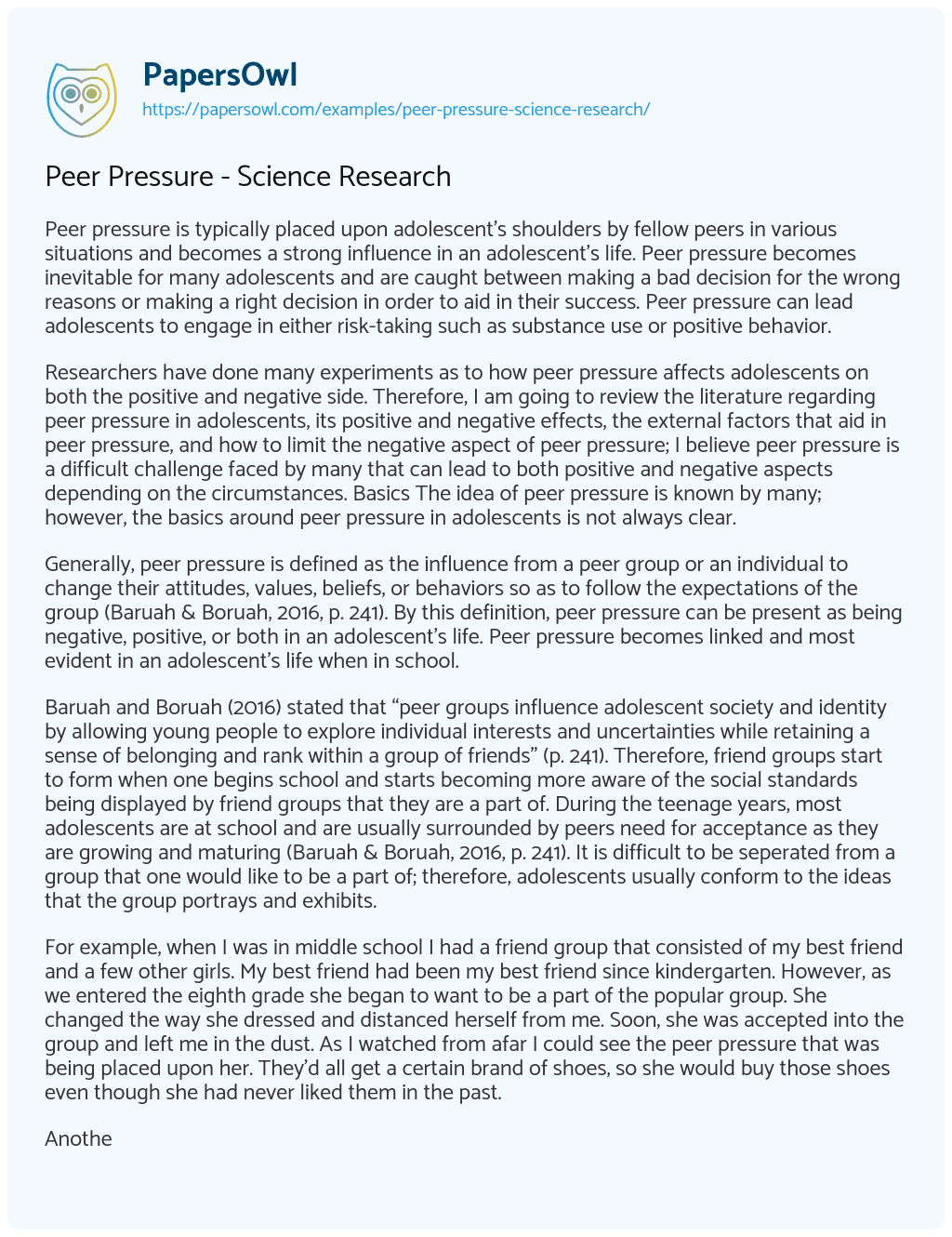 Peer pressure is typically placed upon adolescent’s shoulders by fellow peers in various situations and becomes a strong influence in an adolescent’s life. Peer pressure becomes inevitable for many adolescents and are caught between making a bad decision for the wrong reasons or making a right decision in order to aid in their success. Peer pressure can lead adolescents to engage in either risk-taking such as substance use or positive behavior.

Baruah and Boruah (2016) stated that “peer groups influence adolescent society and identity by allowing young people to explore individual interests and uncertainties while retaining a sense of belonging and rank within a group of friends” (p. 241). Therefore, friend groups start to form when one begins school and starts becoming more aware of the social standards being displayed by friend groups that they are a part of. During the teenage years, most adolescents are at school and are usually surrounded by peers need for acceptance as they are growing and maturing (Baruah & Boruah, 2016, p. 241). It is difficult to be seperated from a group that one would like to be a part of; therefore, adolescents usually conform to the ideas that the group portrays and exhibits.

For example, when I was in middle school I had a friend group that consisted of my best friend and a few other girls. My best friend had been my best friend since kindergarten. However, as we entered the eighth grade she began to want to be a part of the popular group. She changed the way she dressed and distanced herself from me. Soon, she was accepted into the group and left me in the dust. As I watched from afar I could see the peer pressure that was being placed upon her. They’d all get a certain brand of shoes, so she would buy those shoes even though she had never liked them in the past.

Another instance was when the group of girls went to Six Flags and she went to, but she had never liked roller coasters. She followed the expectations of the group in order to feel accepted. Peer pressure brought upon adolescents can be difficult when being presented with it, but it depends on whether the pressure is being portrayed as negative or positive. Positive Peer Pressure Groups On the other hand, positive peer pressure helps aid in a variety of aspects when present, specifically in academic performance and communication skills. Academic performance has has been shown to improve because of positive pressure from peer groups.

Positive peer pressure helps aid in the push for adolescents to do good rather than bad. According to Das (2016), “some of the adolescents reported of good grades due to having positive peer groups” (p. 503). The pressure to belong to a peer group and feel accepted and included creates a tendency to be like other members of the group. Therefore, when the group has good grades the individual feels positive pressure to be like the others (Das, 2016, p. 503). When a peer or friend group pushes the group’s standards to have a high academic performance and excel in their educational pathway, it creates a drive for members to achieve and sustain those standards. If an individual in the group is not doing as well academically they feel as though they are not part of the friend group as much, so they begin to be pressured to work harder in order to be and feel more connected to the group.

The more the adolescent is involved with their peers, the more likely they are to participate in risky behavior due to the pressure of so many peers. Friends and peer groups are frequently and the most associated variable with involvement in risky behavior (Goel & Malik, 2017, p. 1528). From personal experience, I have witnessed peer pressure utilized in order for a person to engage in risky behavior by their fellow friends. There was a party that had quite a few people there and there was alcohol present at the party since there were no parents or guardians home.

As I was sitting on the couch, I could see the hosts of the party trying to have one of their friends have a drink. This person never drank but gave into the peer pressure because he did not want to be the odd one out or be made fun of by his own friends. He engaged in risky behavior although he never intended to. The idea of not being made fun of was more enticing and desirable rather than the potential consequences of the risky behavior he participated in. As we have witnessed from other research and from real life, the pressure to engage in misconduct leads to more risk-taking behavior.

Goel and Malik (2017) explain that “misconduct is significantly and positively related with risk taking behavior… implicating that engaging in unacceptable activities increases the risk taking behavior” (p. 1530). Such control from peer pressure often has a great influence on the risky behavior exhibited by individuals whether the peer pressure is minor or major. Active and Passive Peer Discouragement in Risk-taking Active peer discouragement refers to modeling while passive discouragement is utilized as pressure. The study found that active and passive peer discouragement in cohesion create different results when compared to each on their own. Active [modeling] and passive [pressure] simultaneously create a decrease in risk-taking.

Boer and Harakeh performed a study to measure active and passive peer discouragement on risk-taking in adolescents with an e-confederate. The e-confederate in the experiment would be equivalent to an online stranger in the real world. The researchers concluded from their study that the combination of passive and active peer discouragement resulted in a significant decrease in risk-taking behavior (Boer & Harakeh, 2017, p.885). What the peer said did have an influence on the adolescent’s actions when the peer used a combination of passive and active discouragement (Boer & Harakeh, 2017, p. 885).

However, active and passive peer discouragement separately concluded different results. There was no significant decrease in risk-taking when sole passive or sole active peer discouragement was utilized (Boer & Harakeh, 2017, p. 885). Adolescents need to know and see that the person who is discouraging them to take a risk also takes less risk themselves (Boer & Harakeh, 2017, p. 885). Simply, the discourager needs to put his or her words into action. It is easier to discourage when the person telling you to stop also abstains from that risk. Communities Although peer pressure is a strong variable, external factors aid in the magnitude of peer pressure in adolescents as well. Communities serve as a negative contribution to substance abuse; particularly, in adolescents.

Intervention in a community designed to reduce risk factors and increase protective factors in the adolescent population is of great value (Monahan, et al., 2011, 494). When there is an increase in protective factors the community declines in its unknown aid in the use of substance abuse in adolescents. Gender and Peer Pressure When peer pressure is presented to males and females there is a difference in their perception. Male adolescents perceive more peer pressure than female adolescents (Sunita, et al., 2012, p. 80). From my own observations, I do see males being more susceptible to peer pressure because of the stigma that they must not be afraid of anything. For instance, their male peers will tell them to smoke and most of the time they are more likely to do it because they don’t want to seem as if they are afraid or a wimp. Location in unison with gender also make a difference in adolescent peer pressure.

“These findings indicated that young adult students with a positive family climate feel low levels of peer pressure and reported higher well-being” (Pushpa, et al. 2017, p. 198). As established, peer pressure creates more opportunity for risky behavior. In this chain reaction, family climate is also a part and factor in influencing risky behavior due to peer pressure. Other factors also contribute to adolescent risk-taking behaviors. Some of these risk-taking behaviors are dependent upon different factors like family size, socioeconomic status, quality of family interaction, and parenting styles (Pushpa, et al. 2017, p. 199). When these factors are poor or negative, it creates a greater opportunity for an increase in peer pressure due to the low family climate. Thus, leading to risk taking behaviors exhibited by adolescents.

In the study, leisure boredom is defined as the “ ‘subjective perception the available leisure experiences are not sufficient to instrumentally satisfy needs for optimal arousal’ (Iso-Ahola & Weissinger, 1990, p. 4)” (Hendricks, et al., 2015, p. 105). Leisure boredom on its own did not depict a significant predator for substance abuse (Hendricks, et al., 2015, p. 105). Peer Pressure and Disabled Adolescents Developmental disability refers to individuals with “severe developmental delays, intellectual disabilities, and autism spectrum disorders as well as individuals… in the low ranges of cognitive and/or social functioning” (Khemka et al. 2016, p. 2372-2373).

“ ‘A paramount aspect of successful social functioning and overall well-being of adolescents with disabilities is their ability to independently and meaningfully access and participate in the array of interpersonal interactions and peer relationships occurring in school and beyond’ (Wentzel et al. 2012)” (Khemka et al. 2016, p. 2372). Peer pressure does not only affect those who are not disabled, it affects all parts of the spectrum.

Teenagers are aware to some extent on how to resist peer pressure; however, this does not always guarantee that they will stray away from it (Rukundo, 2012, p. 85). Adolescents find it difficult to think rationally about engaging in risky behavior because peer beliefs, values, and experiences can be adopted for themselves (Rukundo, 2012, p. 84). There are various strategies to resist the pressure of fellow peers when in school.

Lastly, seeking guidance from parents and teachers about potential peer pressure can protect someone from engaging in risky behavior (Rukundo, 2012, p. 84).

The topic of peer pressure can further be explored by conducting studies that include many of these factors at onc in order to represent the real world more accurately. Peer pressure is a difficult hurdle to jump over and ignore, but fitting in is not as important as it seems.

Peer Pressure, what you could do Essay

The Impact of Peer Pressure on the Esteem of Children Essay