Outcomes of Parents Spank their Children 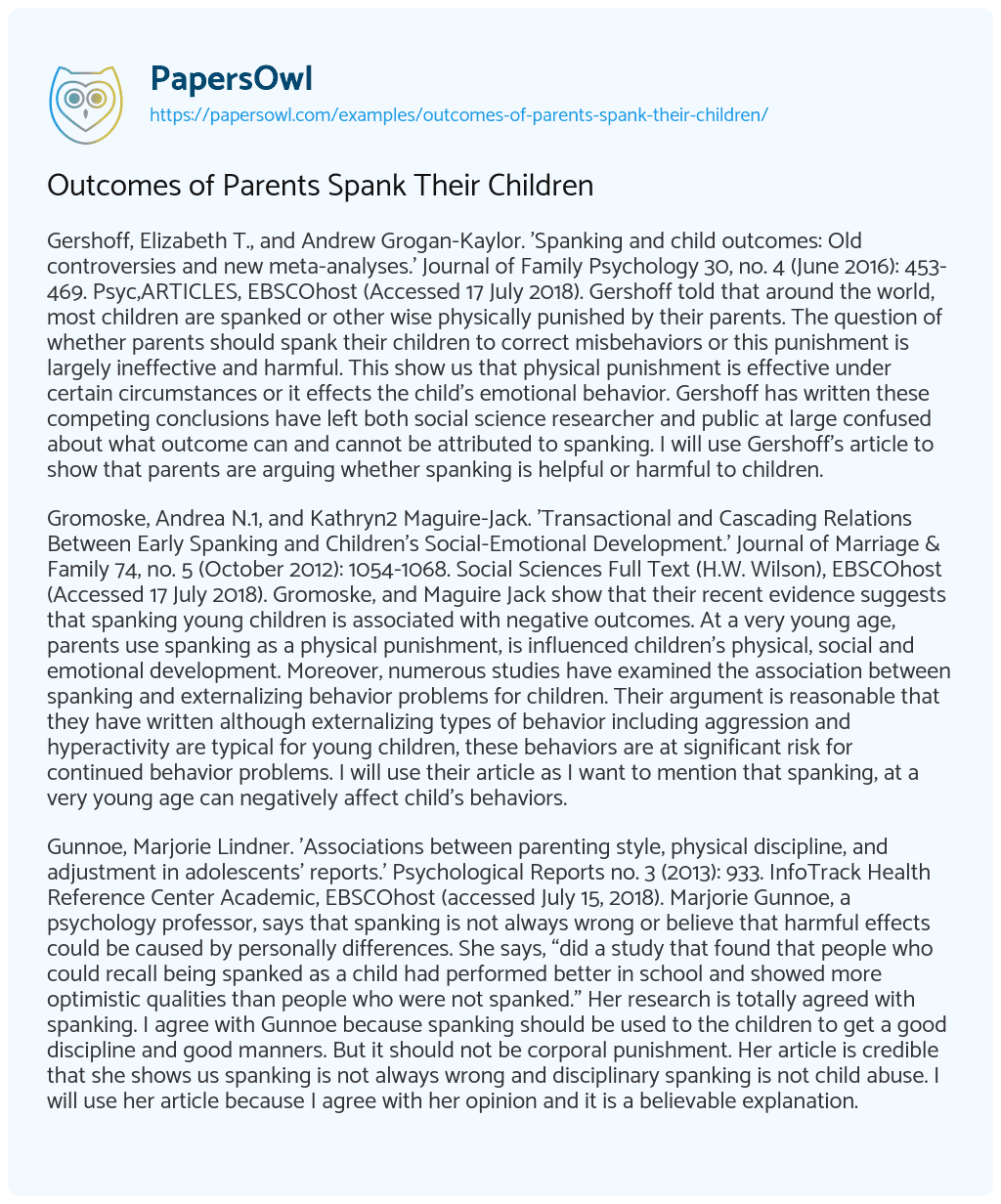 Gershoff, Elizabeth T., and Andrew Grogan-Kaylor. ‘Spanking and child outcomes: Old controversies and new meta-analyses.’ Journal of Family Psychology 30, no. 4 (June 2016): 453-469. Psyc,ARTICLES, EBSCOhost (Accessed 17 July 2018). Gershoff told that around the world, most children are spanked or other wise physically punished by their parents. The question of whether parents should spank their children to correct misbehaviors or this punishment is largely ineffective and harmful. This show us that physical punishment is effective under certain circumstances or it effects the child’s emotional behavior. Gershoff has written these competing conclusions have left both social science researcher and public at large confused about what outcome can and cannot be attributed to spanking. I will use Gershoff’s article to show that parents are arguing whether spanking is helpful or harmful to children.

Gromoske, Andrea N.1, and Kathryn2 Maguire-Jack. ‘Transactional and Cascading Relations Between Early Spanking and Children’s Social-Emotional Development.’ Journal of Marriage & Family 74, no. 5 (October 2012): 1054-1068. Social Sciences Full Text (H.W. Wilson), EBSCOhost (Accessed 17 July 2018). Gromoske, and Maguire Jack show that their recent evidence suggests that spanking young children is associated with negative outcomes. At a very young age, parents use spanking as a physical punishment, is influenced children’s physical, social and emotional development. Moreover, numerous studies have examined the association between spanking and externalizing behavior problems for children. Their argument is reasonable that they have written although externalizing types of behavior including aggression and hyperactivity are typical for young children, these behaviors are at significant risk for continued behavior problems. I will use their article as I want to mention that spanking, at a very young age can negatively affect child’s behaviors.

Gunnoe, Marjorie Lindner. ‘Associations between parenting style, physical discipline, and adjustment in adolescents’ reports.’ Psychological Reports no. 3 (2013): 933. InfoTrack Health Reference Center Academic, EBSCOhost (accessed July 15, 2018). Marjorie Gunnoe, a psychology professor, says that spanking is not always wrong or believe that harmful effects could be caused by personally differences. She says, “did a study that found that people who could recall being spanked as a child had performed better in school and showed more optimistic qualities than people who were not spanked.” Her research is totally agreed with spanking. I agree with Gunnoe because spanking should be used to the children to get a good discipline and good manners. But it should not be corporal punishment. Her article is credible that she shows us spanking is not always wrong and disciplinary spanking is not child abuse. I will use her article because I agree with her opinion and it is a believable explanation.

Lansford, Jennifer E., et al. ‘Parental Reasoning, Denying Privileges, Yelling, and Spanking: Ethnic Differences and Associations with Child Externalizing Behavior.’ Parenting: Science & Practice 12, no. 1 (January 2012): 42-56. CINAHL with Full Text, EBSCOhost (Accessed 17 July 2018). Lansford explains that managing children’s behavior is one of the responsibilities of parents. Proactive strategies such as teaching the child how to get along with others and teaching good behavior are important in promoting children’s behavioral adjustment. Their discipline strategies can be conceptualized a long a number of dimensions. One key distinction is whether the discipline is physical or nonphysical. Jennifer Lansford has written that some parents use physical discipline, but some use nonphysical discipline and others use both physical and nonphysical. Lansford article is believable because simultaneously examining different key discipline strategies offers the advantage of promoting understanding of how they operate in relation to children’s problem behavior. I will use Lansford’s article to point out that different parents have different techniques about their children’s discipline.

Pies, Ronald W. ‘Spanking Children Is Ineffective in the Long Term.’ Opposing Viewpoints Online Collection, Gale, 2018. Opposing Viewpoints in Context, http://link.galegroup.com.fortwayne.libproxy.ivytech.edu/apps/doc/PHIMQD952187570/OVIC?u=ivytech31&sid=OVIC&xid=c7b020e8. Accessed 11 July 2018. Originally published as ‘Is it OK to Spank a Misbehaving Child Once in a While?’ The Conversation, 25 Jan. 2016. (Accessed 17 July 2018). Ronald opposed spanking is a form of corporal punishment and it takes a serious toll on the mental health of children. And he also believes that spanking a child may seem helpful in the short term but is ineffective and probably harmful in the long term. Some parents agree with him. They believed that physical force is an acceptable method of problem solving. Ronald’s disagreement with spanking is credible for some people. I will use his article because I want to show my disagreement with Ronald and I believe that spanking is not a child abuse.

Outcomes of Parents Spank Their Children. (2021, Mar 26). Retrieved from https://papersowl.com/examples/outcomes-of-parents-spank-their-children/

Say no to Child Physical Punishment

Another Form of Terrorism