My View of the Definition of Success 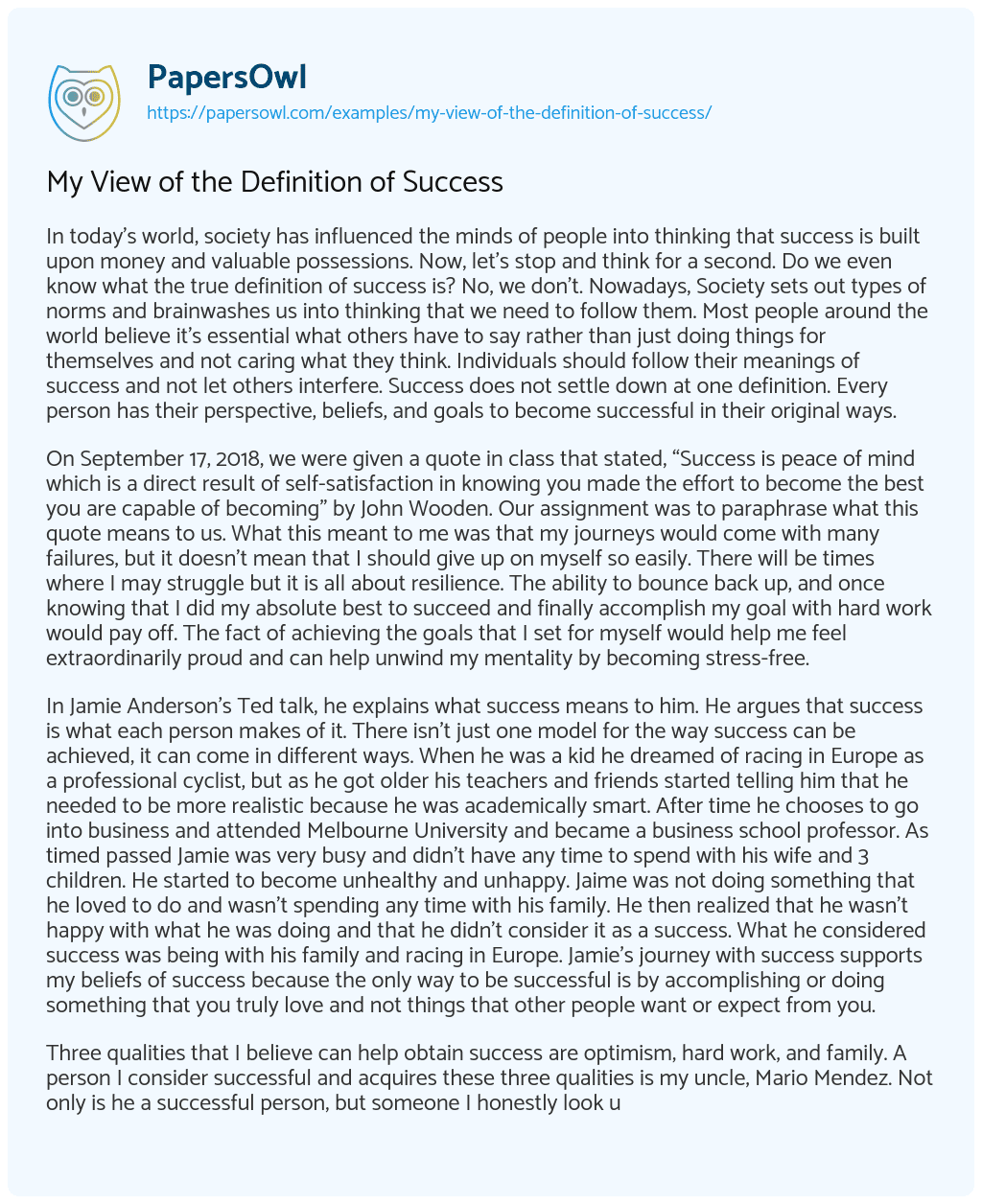 In today’s world, society has influenced the minds of people into thinking that success is built upon money and valuable possessions. Now, let’s stop and think for a second. Do we even know what the true definition of success is? No, we don’t. Nowadays, Society sets out types of norms and brainwashes us into thinking that we need to follow them. Most people around the world believe it’s essential what others have to say rather than just doing things for themselves and not caring what they think. Individuals should follow their meanings of success and not let others interfere. Success does not settle down at one definition. Every person has their perspective, beliefs, and goals to become successful in their original ways.

On September 17, 2018, we were given a quote in class that stated, “Success is peace of mind which is a direct result of self-satisfaction in knowing you made the effort to become the best you are capable of becoming” by John Wooden. Our assignment was to paraphrase what this quote means to us. What this meant to me was that my journeys would come with many failures, but it doesn’t mean that I should give up on myself so easily. There will be times where I may struggle but it is all about resilience. The ability to bounce back up, and once knowing that I did my absolute best to succeed and finally accomplish my goal with hard work would pay off. The fact of achieving the goals that I set for myself would help me feel extraordinarily proud and can help unwind my mentality by becoming stress-free.

In Jamie Anderson’s Ted talk, he explains what success means to him. He argues that success is what each person makes of it. There isn’t just one model for the way success can be achieved, it can come in different ways. When he was a kid he dreamed of racing in Europe as a professional cyclist, but as he got older his teachers and friends started telling him that he needed to be more realistic because he was academically smart. After time he chooses to go into business and attended Melbourne University and became a business school professor. As timed passed Jamie was very busy and didn’t have any time to spend with his wife and 3 children. He started to become unhealthy and unhappy. Jaime was not doing something that he loved to do and wasn’t spending any time with his family. He then realized that he wasn’t happy with what he was doing and that he didn’t consider it as a success. What he considered success was being with his family and racing in Europe. Jamie’s journey with success supports my beliefs of success because the only way to be successful is by accomplishing or doing something that you truly love and not things that other people want or expect from you.

Three qualities that I believe can help obtain success are optimism, hard work, and family. A person I consider successful and acquires these three qualities is my uncle, Mario Mendez. Not only is he a successful person, but someone I honestly look up to and acknowledge. My uncle is one of the few people I know that are optimistic. He always keeps a positive mindset when he is feeling down or when problems in his daily life occur. He never lets anything get in his way and when he does he doesn’t give up and finds a solution to solve the problem. I know that he is a very hard worker along with many other people around the world. He manages a fast food restaurant that is very common called Carl’s Jr. Managing any business is difficult, but my uncle puts in backbreaking work by keeping everything running smoothly. He works hard to be able to provide for himself and family. A family is one of the significant things my uncle cares most about. Without his families support, he wouldn’t be where he is right now. He is entirely grateful for all the things he has accomplished and for what he has earned to get this far. He enjoys doing things he loves and does not regret any of it. He loves helping others, plays on a volleyball team and enjoys parties with his family. When I questioned him what success meant to him he answered, ”Success means to follow my goals and dreams without letting anybody get in my way from achieving it and most importantly if it is something I love doing.”

An example of success where money and valuable belongings take place is stated in the book, The Great Gatsby. F. Scott Fitzgerald wrote it in the year of 1925. In his novel, demonstrates various symbols that have valuable meanings. For example, money and the green light at the end of Daisy’s dock play a massive role amongst Gatsby’s life. Gatsby is full of riches and luxurious items that you can ever think of. He lives in a huge mansion where he throws enormous parties that can light up a whole city. His purpose of these parties was to attract one specific girl who he had fallen deeply in love with, her name was Daisy. After plenty of parties, Gatsby always hoped for Daisy to show up. Until one night Daisy attended one of his parties and was not impressed. As you see Daisy did not love the way Gatsby lived. She was already married to a man named Tom Buchanan and was accustomed to his lifestyle. Gatsby tried to convince Daisy into leaving Tom for him. He offered her what he had which was money and anything she asked for, but she denied. One night Gatsby went onto his dock and saw Daisy’s green light flashing which represents his hopes and dreams for his future. As time passed the green light faded away little by little. Gatsby was devastated because it meant that his future was not what he expected it to be. He had dreamed of having Daisy by his side and accomplishing The American Dream.

My View of the Definition of Success. (2021, Mar 22). Retrieved from https://papersowl.com/examples/my-view-of-the-definition-of-success/

“The Great Gatsby” and “Death of a Salesman”