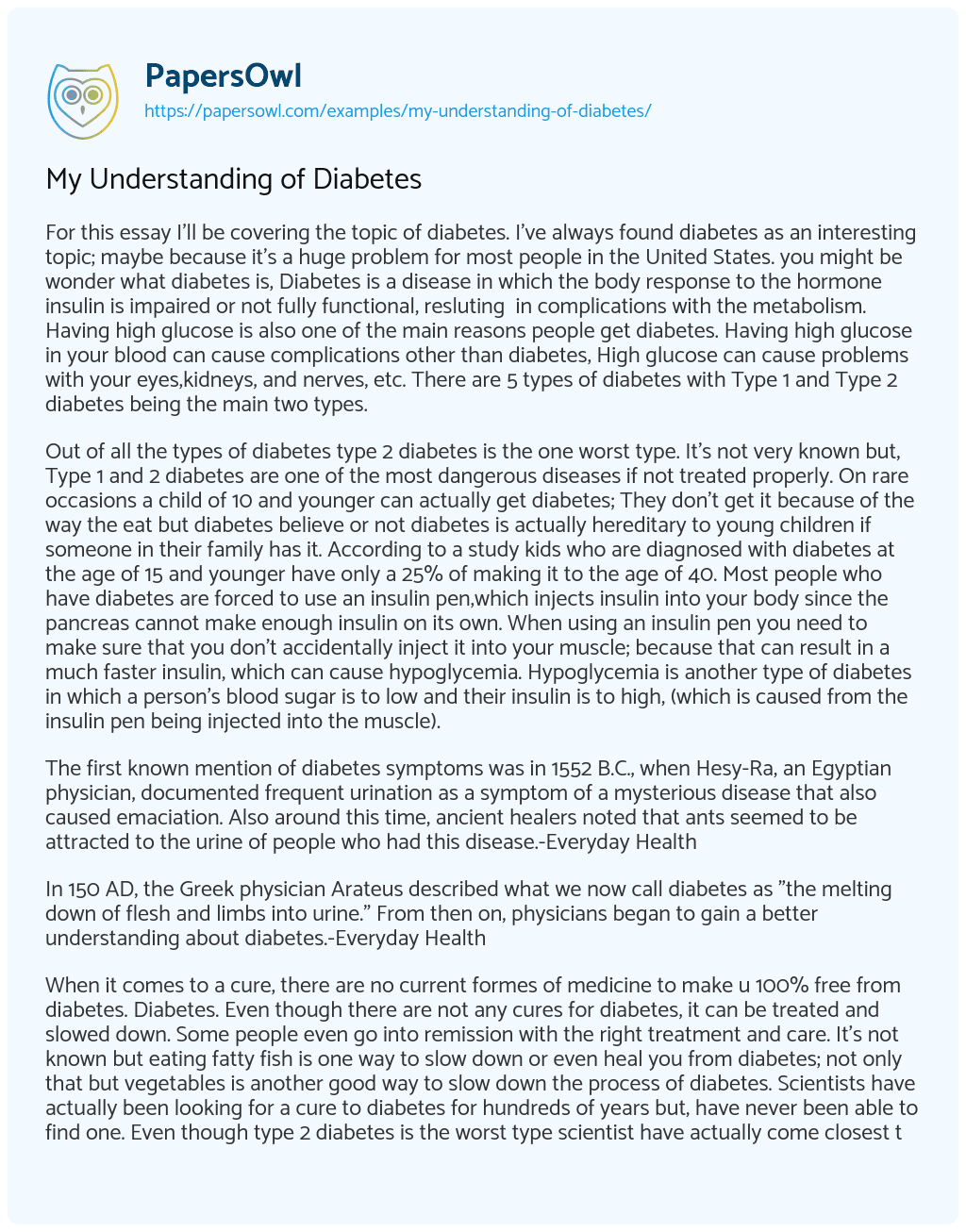 For this essay I’ll be covering the topic of diabetes. I’ve always found diabetes as an interesting topic; maybe because it’s a huge problem for most people in the United States. you might be wonder what diabetes is, Diabetes is a disease in which the body response to the hormone insulin is impaired or not fully functional, resluting  in complications with the metabolism. Having high glucose is also one of the main reasons people get diabetes. Having high glucose in your blood can cause complications other than diabetes, High glucose can cause problems with your eyes,kidneys, and nerves, etc. There are 5 types of diabetes with Type 1 and Type 2 diabetes being the main two types.

Out of all the types of diabetes type 2 diabetes is the one worst type. It’s not very known but, Type 1 and 2 diabetes are one of the most dangerous diseases if not treated properly. On rare occasions a child of 10 and younger can actually get diabetes; They don’t get it because of the way the eat but diabetes believe or not diabetes is actually hereditary to young children if someone in their family has it. According to a study kids who are diagnosed with diabetes at the age of 15 and younger have only a 25% of making it to the age of 40. Most people who have diabetes are forced to use an insulin pen,which injects insulin into your body since the pancreas cannot make enough insulin on its own. When using an insulin pen you need to make sure that you don’t accidentally inject it into your muscle; because that can result in a much faster insulin, which can cause hypoglycemia. Hypoglycemia is another type of diabetes in which a person’s blood sugar is to low and their insulin is to high, (which is caused from the insulin pen being injected into the muscle).

The first known mention of diabetes symptoms was in 1552 B.C., when Hesy-Ra, an Egyptian physician, documented frequent urination as a symptom of a mysterious disease that also caused emaciation. Also around this time, ancient healers noted that ants seemed to be attracted to the urine of people who had this disease.-Everyday Health

In 150 AD, the Greek physician Arateus described what we now call diabetes as “the melting down of flesh and limbs into urine.” From then on, physicians began to gain a better understanding about diabetes.-Everyday Health

When it comes to a cure, there are no current formes of medicine to make u 100% free from diabetes. Diabetes. Even though there are not any cures for diabetes, it can be treated and slowed down. Some people even go into remission with the right treatment and care. It’s not known but eating fatty fish is one way to slow down or even heal you from diabetes; not only that but vegetables is another good way to slow down the process of diabetes. Scientists have actually been looking for a cure to diabetes for hundreds of years but, have never been able to find one. Even though type 2 diabetes is the worst type scientist have actually come closest to finding a cure for it.

According to a former scientist (name is hidden for safety reasons) we have already found a cure for diabetes but the  U.S and it’s greed want to keep it a secret until the demand for it is so high that they can sell it at a huge rate  I  think that the U.S.A. have cures to a lot of diseases but because of our greed for money and wealth we are willing to let our own people suffer and die just so we can make money; but that’s my opinion. This is a little off topic but, I think because of our greed and need for physical things and stuff we will soon be coming to a point where nobody matters as long as I have this million dollar watch or i need this phone and stuff; I feel like this will be America’s downfall.

A recent study in 2015 showed that at least 76% percent of people struggle with being over weight, while 46% are considered obese. This is a huge problem for the U.S. because with there being so many people who are obese there is a lower employment rate because of how limited they are. Think for a minute most can only walk for a few minutes, some can’t even walk, some can’t even stand doing a checkout because they can only stand for a few minutes. If they can’t do some of the simplest jobs then how are they going to do jobs that are way more difficult? Who are we going to find for the military,farmers,Environmentalalist, etc. My point is that if we don’t find a way to stop people from becoming obese within 50 years the U.S. will have no workers or anything to keep our country running.

And the reason i brought up obesity is because obesity is the leading cause to diabetes right now. A recent study showed that 40% of people with obesity also have diabetes and people who are obese and have diabetes have a 32% of passing it on to there children, and their children’s children, and there children’s children’s children, etc. Another fact is that people with diabetes live 10-20 years less than the average person. Think you’re not living the average 70 years you’re only living 50-60 years which is so short. There was a study in 2017 by a scientist who’s name remained hidden, that by 2020 they will have a cure for diabetes and diabetes will go down 60% by 2025.

One thing that disappoints me the most, is that God gave us so many things a heart that works, a brain, a digestive system, etc; but we can’t even take care of what He has blessed us with. I understand some people can’t help it cause they were born with a disability or something but, i’m talking about the majority of us who can walk with ease, run with ease, talk with ease, etc; but we choose to please ourselves and destroy our body. This will be another downfall for us.

My Understanding of Diabetes. (2019, Aug 27). Retrieved from https://papersowl.com/examples/my-understanding-of-diabetes/

An Evolution of Diabetes