Misogyny and Violence in Othello 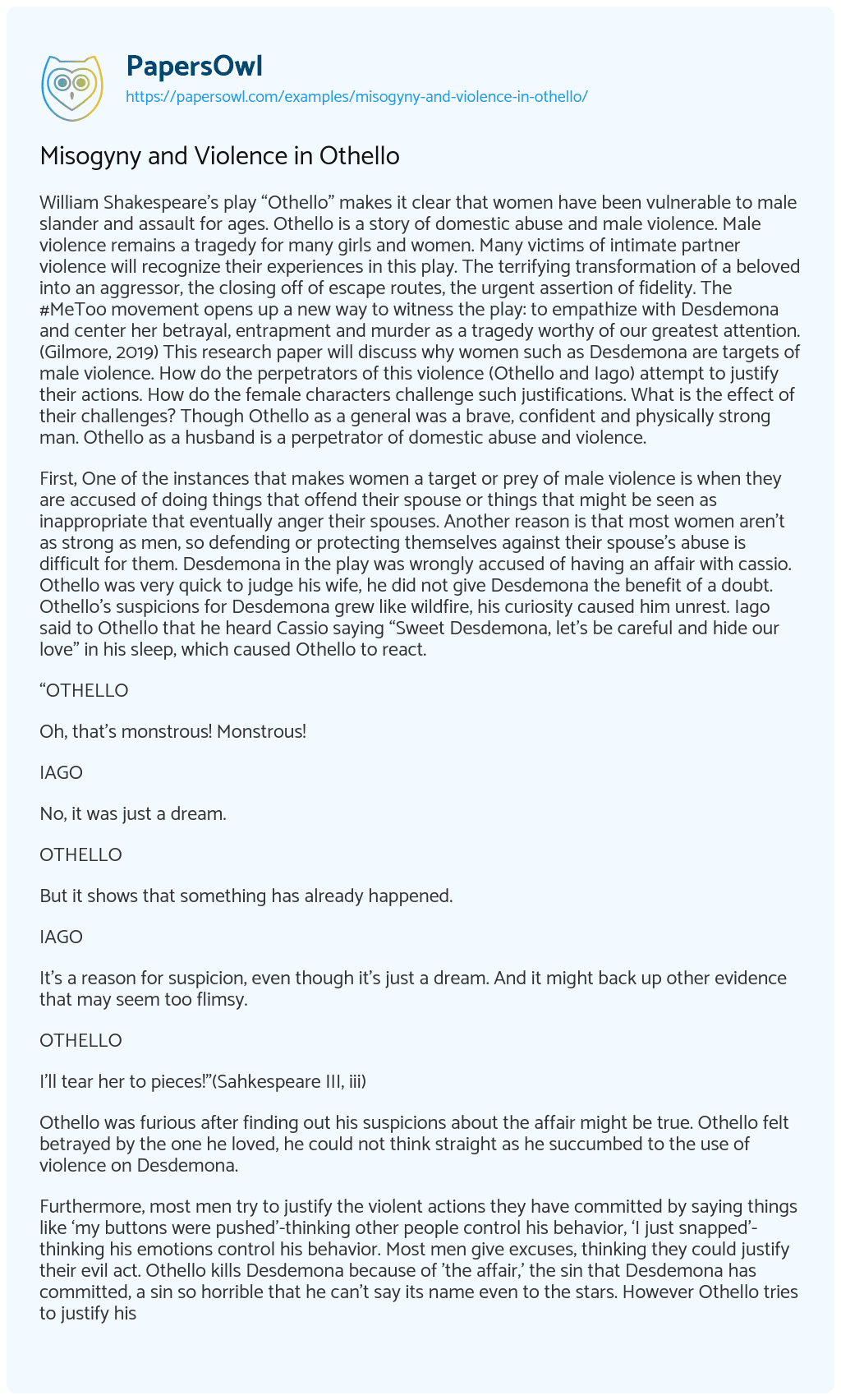 William Shakespeare’s play “Othello” makes it clear that women have been vulnerable to male slander and assault for ages. Othello is a story of domestic abuse and male violence. Male violence remains a tragedy for many girls and women. Many victims of intimate partner violence will recognize their experiences in this play. The terrifying transformation of a beloved into an aggressor, the closing off of escape routes, the urgent assertion of fidelity. The #MeToo movement opens up a new way to witness the play: to empathize with Desdemona and center her betrayal, entrapment and murder as a tragedy worthy of our greatest attention.(Gilmore, 2019) This research paper will discuss why women such as Desdemona are targets of male violence. How do the perpetrators of this violence (Othello and Iago) attempt to justify their actions. How do the female characters challenge such justifications. What is the effect of their challenges? Though Othello as a general was a brave, confident and physically strong man. Othello as a husband is a perpetrator of domestic abuse and violence.

First, One of the instances that makes women a target or prey of male violence is when they are accused of doing things that offend their spouse or things that might be seen as inappropriate that eventually anger their spouses. Another reason is that most women aren’t as strong as men, so defending or protecting themselves against their spouse’s abuse is difficult for them. Desdemona in the play was wrongly accused of having an affair with cassio. Othello was very quick to judge his wife, he did not give Desdemona the benefit of a doubt. Othello’s suspicions for Desdemona grew like wildfire, his curiosity caused him unrest. Iago said to Othello that he heard Cassio saying “Sweet Desdemona, let’s be careful and hide our love” in his sleep, which caused Othello to react.

No, it was just a dream.

But it shows that something has already happened.

It’s a reason for suspicion, even though it’s just a dream. And it might back up other evidence that may seem too flimsy.

Othello was furious after finding out his suspicions about the affair might be true. Othello felt betrayed by the one he loved, he could not think straight as he succumbed to the use of violence on Desdemona.

Furthermore, most men try to justify the violent actions they have committed by saying things like ‘my buttons were pushed’-thinking other people control his behavior, ‘I just snapped’- thinking his emotions control his behavior. Most men give excuses, thinking they could justify their evil act. Othello kills Desdemona because of ‘the affair,’ the sin that Desdemona has committed, a sin so horrible that he can’t say its name even to the stars. However Othello tries to justify his act by telling Emilia that Desdemona turned against him and she was a prostitute. In Othello’s last speech of the play, Othello was asking for forgiveness before his death when he realizes he had made the mistake of killing Desdemona. Whether Othello killed Desdemona by mistake or not doesn’t matter. A murder is still a murder. Murdering people is a heinous crime. A murder is much more worse than having an affair. Therefore, Othello committed a crime greater than adultery out of jealousy.

Similarly, Iago also mentions that he believes Othello ‘twixt my sheets / He hath done my office’—that is, that Othello has slept with Iago’s wife, Emilia. However, there seems no justification for this suspicion, and even Iago himself says he doesn’t know whether it is true. The idea is simply posited by Iago as if to further justify his actions.(Gilbert, 2018)

Desdemona in the face of violence and threats refused to succumb to the false accusation. Emilia came to discuss an urgent matter with Othello when she heard the dying sound of Desdemona behind the closed curtains.

Oh, who did this thing?

No one. I did it myself. Give my love to my kind husband. Oh, goodbye!

To the very end Desdemona was a ‘perfect’ wife, completely obedient and loyal to her husband, so she chooses not to betray him. Despite the countless ordeals she went through because of Othello’s lack of trust in her, Desdemona till the very end still tried to convince Othello she was his faithful wife rather than the whore he thought she was. Similarly, Emilia believed Desdemona could never have an affair for any man. After Desdemona passed away, Emilia attempted to report the situation when Othello said

She was lying even as she was going down to hell. I did kill her.

Then she was even more an angel, and you’re an even blacker devil!

She cheated on me, and she was a whore.

You slander her, you devil.

You’ve lost your mind to accuse her of cheating. She was utterly true to you!

Cassio had sex with her. Ask your husband if you doubt me. If I didn’t have a good reason to do this, damn me to the very bottom of hell. Your husband knew about everything.

If he said that, then I hope his malicious soul rots in hell forever. He’s lying through his teeth! She was too attached to her filthy marriage to ever do a thing like that!”(ShakespeareV, ii)

Emilia could not bear to watch Othello curse Desdemona’s corpse of having an affair, so Emilia denied all of the atrocities Othello accuses Desdemona for. Emilia’s denial was a start to the revelation of Iago’s evil plot and manipulation.

Confronting male violence could put an end to the circle of fear and tragedy. Male violence has caused nothing but destruction in families today. We hear on the news about couples getting divorced, kids flee from home, husband arrested for murdering his wife, etc. None of this news sounds comforting to the ear. Challenges of female characters such as Desdemona and Emilia caused Othello to repent in his last moment after learning the truth behind Iago.

Othello told Cassio that he believes and cassion should forgive him. Othello said to himself

Wait. A word or two before you go. I’ve given the state of Venice a bit of help in the past, and they know it. But enough about that. When you record these sad events in your letters, please describe me exactly as I am. Don’t tone things down or exaggerate them out of hostility. If you’re being fair, you’ll have to describe me as someone who loved too much, but who wasn’t wise about it. I was not easily made jealous, but once I was tricked and manipulated, I worked myself into a frenzy. Describe me as a fool who threw away a precious pearl with his own hands, like a silly Indian who didn’t know what it was worth…….

(to DESDEMONA) I kissed you before I killed you. Now, killing myself, I’m dying while I kiss you again.

Othello bitterly regrets killing his own wife, Othello took his own life as a sign of his sincerity and repentance. It might not be too late for most men who still use violence as a means to operate. One of Othello deepest regrets was killing his own protector[Desdemona]. Men should stop using violence when they still can. Challenging and discouraging violence will end the circle of mischief in most people’s lives.

‘What reason does Iago give for his hatred of Othello?’ eNotes Editorial, 6 May 2018, https://www.enotes.com/homework-help/what-reason-does-iago-give-for-his-hatred-othello-51607. Accessed 20 June 2020.

Misogyny and Violence in Othello. (2021, May 11). Retrieved from https://papersowl.com/examples/misogyny-and-violence-in-othello/