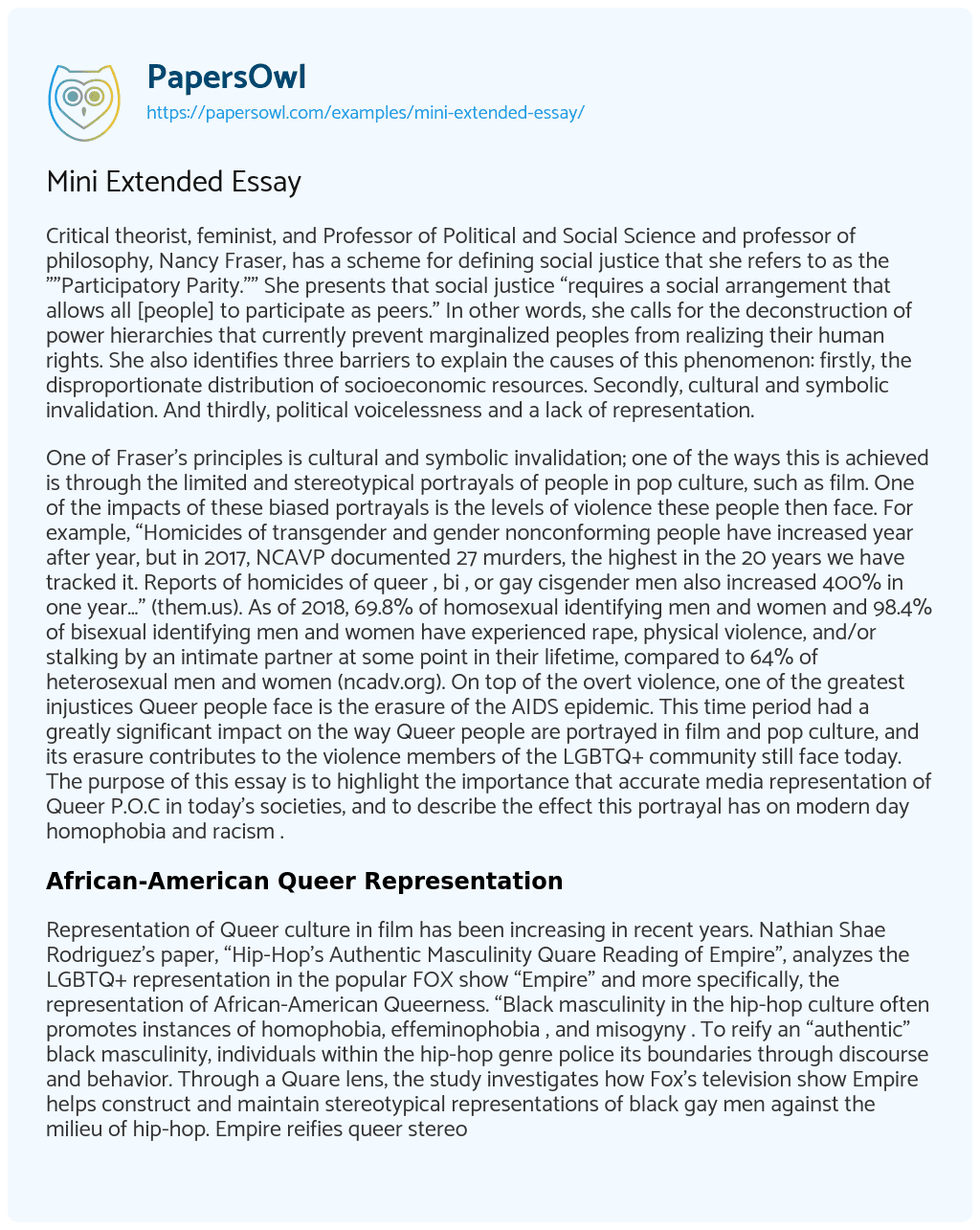 Critical theorist, feminist, and Professor of Political and Social Science and professor of philosophy, Nancy Fraser, has a scheme for defining social justice that she refers to as the “”Participatory Parity.”” She presents that social justice “requires a social arrangement that allows all [people] to participate as peers.” In other words, she calls for the deconstruction of power hierarchies that currently prevent marginalized peoples from realizing their human rights. She also identifies three barriers to explain the causes of this phenomenon: firstly, the disproportionate distribution of socioeconomic resources. Secondly, cultural and symbolic invalidation. And thirdly, political voicelessness and a lack of representation.

One of Fraser’s principles is cultural and symbolic invalidation; one of the ways this is achieved is through the limited and stereotypical portrayals of people in pop culture, such as film. One of the impacts of these biased portrayals is the levels of violence these people then face. For example, “Homicides of transgender and gender nonconforming people have increased year after year, but in 2017, NCAVP documented 27 murders, the highest in the 20 years we have tracked it. Reports of homicides of queer , bi , or gay cisgender men also increased 400% in one year…” (them.us). As of 2018, 69.8% of homosexual identifying men and women and 98.4% of bisexual identifying men and women have experienced rape, physical violence, and/or stalking by an intimate partner at some point in their lifetime, compared to 64% of heterosexual men and women (ncadv.org). On top of the overt violence, one of the greatest injustices Queer people face is the erasure of the AIDS epidemic. This time period had a greatly significant impact on the way Queer people are portrayed in film and pop culture, and its erasure contributes to the violence members of the LGBTQ+ community still face today. The purpose of this essay is to highlight the importance that accurate media representation of Queer P.O.C in today’s societies, and to describe the effect this portrayal has on modern day homophobia and racism .

Representation of Queer culture in film has been increasing in recent years. Nathian Shae Rodriguez’s paper, “Hip-Hop’s Authentic Masculinity Quare Reading of Empire”, analyzes the LGBTQ+ representation in the popular FOX show “Empire” and more specifically, the representation of African-American Queerness. “Black masculinity in the hip-hop culture often promotes instances of homophobia, effeminophobia , and misogyny . To reify an “authentic” black masculinity, individuals within the hip-hop genre police its boundaries through discourse and behavior. Through a Quare lens, the study investigates how Fox’s television show Empire helps construct and maintain stereotypical representations of black gay men against the milieu of hip-hop. Empire reifies queer stereotypes and highlights conventions of black masculinity and hip-hop authenticity” (Rodriguez).

Rodriguez identifies that the most common portrayal of black gay males is “through the lens of negro faggotry, which describes an “effeminate, cute, comic homosexuality” that reduces the character to a ridiculed caricature and strips him of both culture and masculinity.” The way black members of the Queer community are represented in media often enforces harmful stereotypes about Queerness and masculinity, which usually involve interpersonal conflicts, violence, self-destructiveness, and an inability to sustain romantic relationships.

The 2014 film “A Girl Walks Home Alone at Night” tells the story of an Iranian feminist vampire who kills men that harm and disrespect women. Shadee Abdi and Bernadette Marie Calafell discuss in their paper, “Queer utopias and a Feminist Iranian vampire: a critical analysis of resistive monstrosity in A Girl Walks Home Alone at Night” how as the first film of its kind, AGWHAAN is “not only a significant text in horror; it also offers an opportunity to engage possibilities of social resistance for Iranian-Americans negotiating often discordant Iranian cultural/familial/social identities.” The film portrays Iranian Queerness and their roles in society symbolically through the monsters. The unsettling connotation that surrounds monsters comes from a societal fear of the unknown. Queer people (like monsters) defy easy categorization. Queers challenge traditional gender/sexuality roles and stray away from what today’s society deems acceptable and “normal”. Additionally, Benshoff writes that “vampires are often coded as queer because [of] the monster as homosexual rhetoric [that] emerged in the early days of HIV/AIDs, as gay men were seen as contagions – vampires, who with a single mingling of blood, can infect a poor innocent victim, transforming him or her into the living dead”.

Queer representation in Western media has undergone profound advancements in recent years. Queer roles on television and in film used to be stereotypical and one-dimensional, without any central Queer characters. Today, Queer people are often depicted as complex, main characters. However, the portrayal of Queerness in Western television and film are commonly warped and stereotypical. Frederik Dhaenens writes in his article, “Articulations of queer resistance on the small screen”, that even with the increasingly positive representation of Queer culture in Western society, “many media scholars have argued that the medium of television is governed by heteronormativity .” To elaborate, modern-day Western television maintains the same rigid binary perception of sex, gender, sexuality, gender expression, and other aspects of Queer culture, that it’s always had.

The AIDS/HIV epidemic has always been directly linked with negative and hateful attitudes towards Queer people, especially MSM ; a group that is particularly affected by HIV and AIDS. At the beginning of the epidemic, in many countries’ gay men and other MSM were constantly singled out for abuse because they were labeled solely responsible for the transmission of the disease. Representation in the press became increasingly homophobic, and fueled the stigma that Queers were diseased. Headlines such as “Alert over gay plague” and “gay plague may lead to blood ban on homosexuals” demonized the LGBTQ+ community and blamed them for a lethal disease that didn’t originate with them. Queer people still face challenges and barriers, such as violence, human right violations, stigma and discrimination. “Criminalization of same-sex relationships, cross-dressing, sodomy and ‘gender impersonation’ feeds into ‘social homophobia’ and both factors prevent LGBT[Q+] people from accessing vital HIV prevention, testing, and treatment and care services. As a result, some [Queer] people are unknowingly living with HIV or being diagnosed late when HIV is harder to treat” (avert.org).

The way Queer people are represented in media contributes largely to the way our society perceives them. The impact of the negative representation from the AIDS crisis is still prominent in today’s world. The negative stigmatization of Queers around the world affects not only the way that society perceives them, but on how they perceive themselves. “A study of [MSM] in Tijuana, Mexico found that internalized homophobia …was strongly associated with never having tested for HIV, while testing for HIV was associated with identifying as homosexual or gay and being more ‘out’ about having sex with men” (avert.org).”