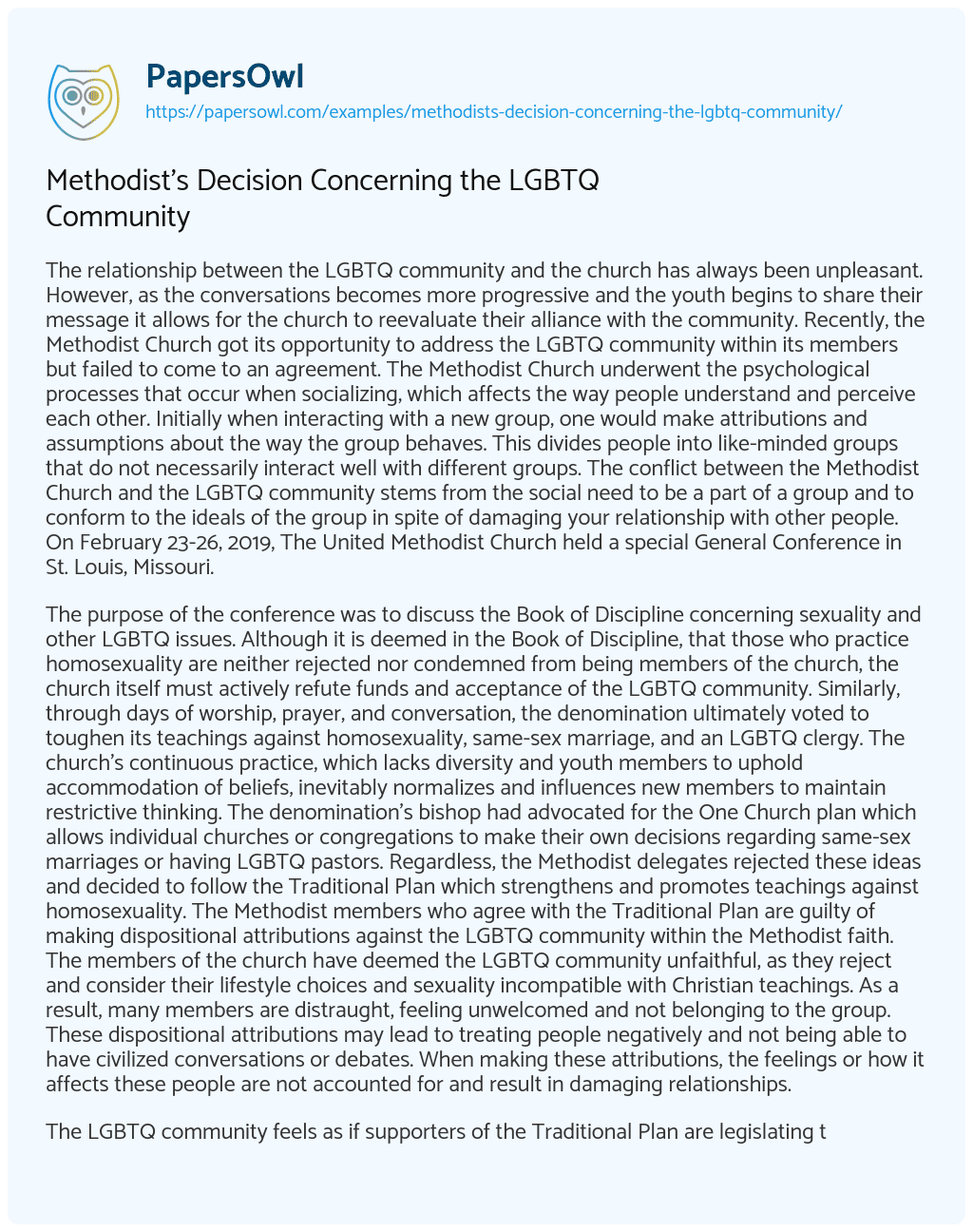 The relationship between the LGBTQ community and the church has always been unpleasant. However, as the conversations becomes more progressive and the youth begins to share their message it allows for the church to reevaluate their alliance with the community. Recently, the Methodist Church got its opportunity to address the LGBTQ community within its members but failed to come to an agreement. The Methodist Church underwent the psychological processes that occur when socializing, which affects the way people understand and perceive each other. Initially when interacting with a new group, one would make attributions and assumptions about the way the group behaves. This divides people into like-minded groups that do not necessarily interact well with different groups. The conflict between the Methodist Church and the LGBTQ community stems from the social need to be a part of a group and to conform to the ideals of the group in spite of damaging your relationship with other people. On February 23-26, 2019, The United Methodist Church held a special General Conference in St. Louis, Missouri.

The purpose of the conference was to discuss the Book of Discipline concerning sexuality and other LGBTQ issues. Although it is deemed in the Book of Discipline, that those who practice homosexuality are neither rejected nor condemned from being members of the church, the church itself must actively refute funds and acceptance of the LGBTQ community. Similarly, through days of worship, prayer, and conversation, the denomination ultimately voted to toughen its teachings against homosexuality, same-sex marriage, and an LGBTQ clergy. The church’s continuous practice, which lacks diversity and youth members to uphold accommodation of beliefs, inevitably normalizes and influences new members to maintain restrictive thinking. The denomination’s bishop had advocated for the One Church plan which allows individual churches or congregations to make their own decisions regarding same-sex marriages or having LGBTQ pastors. Regardless, the Methodist delegates rejected these ideas and decided to follow the Traditional Plan which strengthens and promotes teachings against homosexuality. The Methodist members who agree with the Traditional Plan are guilty of making dispositional attributions against the LGBTQ community within the Methodist faith. The members of the church have deemed the LGBTQ community unfaithful, as they reject and consider their lifestyle choices and sexuality incompatible with Christian teachings. As a result, many members are distraught, feeling unwelcomed and not belonging to the group. These dispositional attributions may lead to treating people negatively and not being able to have civilized conversations or debates. When making these attributions, the feelings or how it affects these people are not accounted for and result in damaging relationships.

The LGBTQ community feels as if supporters of the Traditional Plan are legislating their belief in God and are purposely putting up barriers. When larger groups form similar negative opinions against another set of people it divides the community and eliminates any form of cooperativeness. The Methodist delegates experience social normative influence because of the need to gain approval from the overall church. Being forced to pick between the two sides allows for a majority of people to follows trends and side with the church. This prevents people from being seen as opposers or unfaithful. Since the Traditional Plan was affirmed, it reveals that numerous people agreed with the church segregating the LGBTQ community but were not verbal about their opinions. Members who are negatively affected by this decision have experienced informative social influence because they have considered how this affects the Methodist Church’s reputation and how this could stall the growth of the church. Pastors and members of the LGBTQ community have advocated for the One Church rule because they are informed and are following society’s progressive attitude. Depending on how different members are influenced, they support different narratives and are not cooperating with each other. Because the Methodist delegates, as a majority, decided to side with the traditional rules of the church and disregard the concerns of the LGBTQ community, they showcase having in-group bias. The concept applies to groups who favor their own members, characteristics, and actions over another group.

As a result, despite agreeing with the other group being the beneficial option, they side with their own bracket for the sake of belonging and loyalty. When concerning the Methodist church and the LGBTQ community, the church split into those who sided with the LGBTQ community and those who withheld traditional beliefs. There is a large group of people who agree with the restrictions in the Book of Discipline and can relate with each other over these shared ideas. Although this decision does not outright ban the LGBTQ from the Methodist Church, it does inconvenience a lot of people and could be a deciding factor for members to leave the church. There are numerous pastors who have gone against the rules and performed same-sex marriages who will now face harsher penalties and are questioning their devotion. Consequences like these influence the opposing community to band together and prevent members from leaving. Because of having an ingroup bias and despite all the members being of the same faith, the majority took the side of the traditional church to avoid questioning their loyalty to the faith and to purge out members who do not agree. Having in-group bias does not allow for either group to advocate for their beliefs or have a progressive conversation.

Although the Methodist and the LGBTQ community come together to pray under the Methodist denomination, they are drastically different sets of people in terms of beliefs and mentality. These differences put them in separate groups which trigger the human need to want to belong and fight for your group to be the dominant one. The psychological process that happens when interacting with people limits you from understanding and coexisting with different groups without questioning who benefits more. Because of this, you need to be aware of how your perception of people are not always correct and could potentially damage your relationships.