Meanings and Perspectives of Globalization 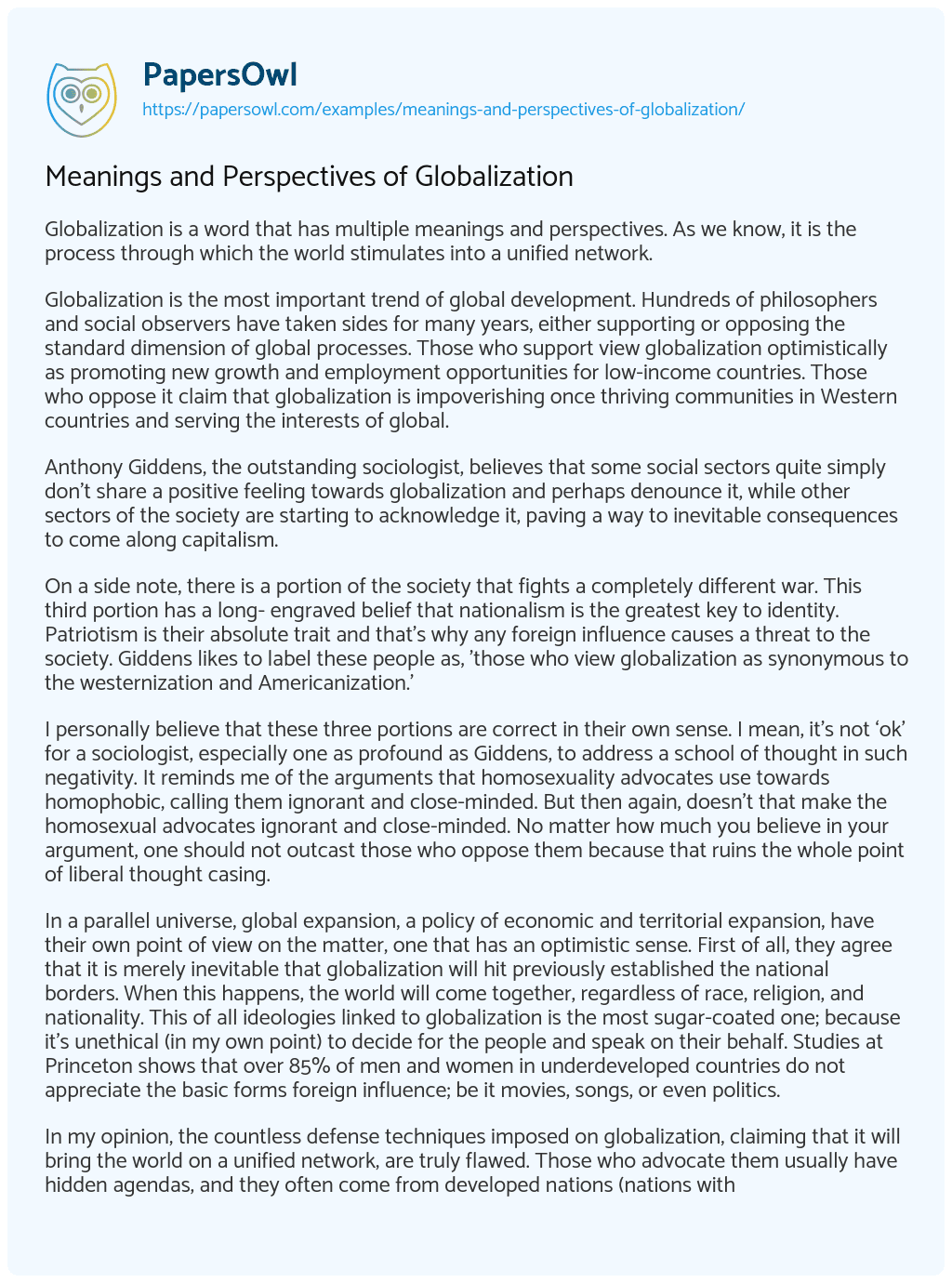 Globalization is a word that has multiple meanings and perspectives. As we know, it is the process through which the world stimulates into a unified network.

Globalization is the most important trend of global development. Hundreds of philosophers and social observers have taken sides for many years, either supporting or opposing the standard dimension of global processes. Those who support view globalization optimistically as promoting new growth and employment opportunities for low-income countries. Those who oppose it claim that globalization is impoverishing once thriving communities in Western countries and serving the interests of global.

Anthony Giddens, the outstanding sociologist, believes that some social sectors quite simply don’t share a positive feeling towards globalization and perhaps denounce it, while other sectors of the society are starting to acknowledge it, paving a way to inevitable consequences to come along capitalism.

On a side note, there is a portion of the society that fights a completely different war. This third portion has a long- engraved belief that nationalism is the greatest key to identity. Patriotism is their absolute trait and that’s why any foreign influence causes a threat to the society. Giddens likes to label these people as, ‘those who view globalization as synonymous to the westernization and Americanization.’

I personally believe that these three portions are correct in their own sense. I mean, it’s not ‘ok’ for a sociologist, especially one as profound as Giddens, to address a school of thought in such negativity. It reminds me of the arguments that homosexuality advocates use towards homophobic, calling them ignorant and close-minded. But then again, doesn’t that make the homosexual advocates ignorant and close-minded. No matter how much you believe in your argument, one should not outcast those who oppose them because that ruins the whole point of liberal thought casing.

In a parallel universe, global expansion, a policy of economic and territorial expansion, have their own point of view on the matter, one that has an optimistic sense. First of all, they agree that it is merely inevitable that globalization will hit previously established the national borders. When this happens, the world will come together, regardless of race, religion, and nationality. This of all ideologies linked to globalization is the most sugar-coated one; because it’s unethical (in my own point) to decide for the people and speak on their behalf. Studies at Princeton shows that over 85% of men and women in underdeveloped countries do not appreciate the basic forms foreign influence; be it movies, songs, or even politics.

In my opinion, the countless defense techniques imposed on globalization, claiming that it will bring the world on a unified network, are truly flawed. Those who advocate them usually have hidden agendas, and they often come from developed nations (nations with the greatest effect). If globalization is fully implemented, many cultures will be eradicated and wiped out, because it doesn’t matter how rich the culture is and money always has the final say. Does it go without saying that the Armenian Culture, for instance, is way older and richer than that of the United States, but have you ever heard of it?

To say that globalization is always subjective and destructive is also a primitive conclusion. How dull would the world be if every country spoke only its language? Globalization has enhanced the entire world on the course of the past hundred years. Companies on different continents can send emails back and forth in English, tourists can find their way around airports with globally unified symbols, and even most political regimes all around the world have shifted towards democracy to join the western coalition. If it weren’t for this moderate globalization, no doubt the world wouldn’t have been as advanced as it stands today.

What’s the solution then? The solution is easy if you ask me is to form a new global council to monitor the impacts of globalization. When the NWICO was founded 30 years ago, it aimed at limiting the western influence on the media of less developed nations, and so it was today. The council should make rules to put a ceiling to the foreign investments in such nations, cutting some slack for national organizations to have a say as well. This is simply on the scale of media, but it should go as far as politics. No country should in any way fund a political candidate in another country, because this threats the solidity of this potential candidate. Like that time the US-funded Hamid Karzai in Afghanistan back in 2005, he later ended up as a puppet following any strategy the US adopts. A complete ban on globalization will paralyze the world, bringing nations apart and causing more wars. However, the exploitation of globalization is also inadequate for the less developed nations. That’s why setting boundaries and not pushing limits is the most efficient moderate card on the poker table today.

Meanings and Perspectives of Globalization. (2021, Mar 23). Retrieved from https://papersowl.com/examples/meanings-and-perspectives-of-globalization/