Martin Luther and the Reformation 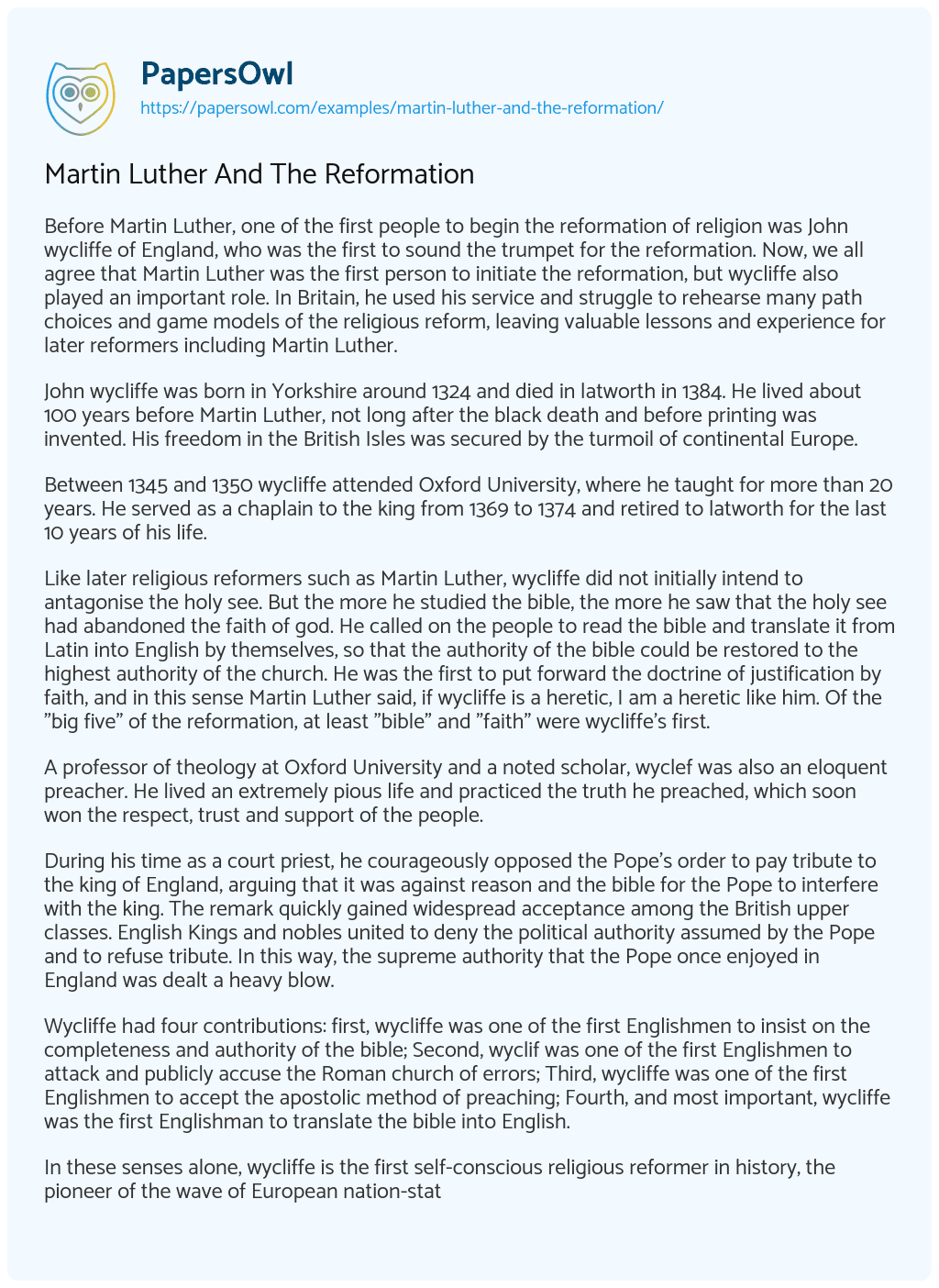 John wycliffe was born in Yorkshire around 1324 and died in latworth in 1384. He lived about 100 years before Martin Luther, not long after the black death and before printing was invented. His freedom in the British Isles was secured by the turmoil of continental Europe.

Between 1345 and 1350 wycliffe attended Oxford University, where he taught for more than 20 years. He served as a chaplain to the king from 1369 to 1374 and retired to latworth for the last 10 years of his life.

Like later religious reformers such as Martin Luther, wycliffe did not initially intend to antagonise the holy see. But the more he studied the bible, the more he saw that the holy see had abandoned the faith of god. He called on the people to read the bible and translate it from Latin into English by themselves, so that the authority of the bible could be restored to the highest authority of the church. He was the first to put forward the doctrine of justification by faith, and in this sense Martin Luther said, if wycliffe is a heretic, I am a heretic like him. Of the “big five” of the reformation, at least “bible” and “faith” were wycliffe’s first.

A professor of theology at Oxford University and a noted scholar, wyclef was also an eloquent preacher. He lived an extremely pious life and practiced the truth he preached, which soon won the respect, trust and support of the people.

During his time as a court priest, he courageously opposed the Pope’s order to pay tribute to the king of England, arguing that it was against reason and the bible for the Pope to interfere with the king. The remark quickly gained widespread acceptance among the British upper classes. English Kings and nobles united to deny the political authority assumed by the Pope and to refuse tribute. In this way, the supreme authority that the Pope once enjoyed in England was dealt a heavy blow.

In these senses alone, wycliffe is the first self-conscious religious reformer in history, the pioneer of the wave of European nation-state independence, and the father of Britain. And in that sense, the later reformers, Jan hus and Martin Luther, were students of wycliffe. So the reformation started with Martin Luther, but he wasn’t the originator of the reformation. Wycliffe was. His place in theology and the history of the church was a pivotal link between the past and the present, ending the middle ages and ushering in the modern era.

The second we are going to discuss is jan hus, a Czech patriot and prominent religious reformer. The reformation in the Czech republic led by huss created public opinion for the war in huss and had a profound influence on the reformation throughout Europe in the 16th century.

Hus was a pioneer of the reformation and many of his words were accepted by later protestants. He also had an important influence on the nations of Europe and on Martin Luther King. Hus wrote many books in his life and made outstanding contributions to the history of Czech literature. Huth believe the bible first, rather than the Pope ordered on the clerics, such as rules, emphasized the sovereignty belongs to the church of Jesus Christ, to the thoughts and ideas and wrote a book of church, even harshly criticized the Pope and other clergy, is deviating from the Christian faith, and loved money and abuse of power, and so on, is really to teach one of the pioneers. The church was in the midst of a “great schism” : two competing popes were elected before the Roman cardinal council: quigley xii of Rome and John xxiii of avignon. King John xxiii to combat with the slope and release the indulgences to all who are in need, with money in exchange for huth is once spent a lot money to buy indulgences, but now huth is greatly condemn such violation of the bible teaches, then John xxiii will teach, huth cancel finally, even in the name of the heresy under him into prison. After eight months in prison, haggard and frail, hus was taken to the city gate, tied to a stake and burned to death. This led to the re-emergence of the crusaders and the campaigns of the Bohemian faithful of huss, which did not end until the 15th century. Hus also created a new orthography that laid the foundation for the written language of Czech.

Martin Luther And The Reformation. (2020, Sep 08). Retrieved from https://papersowl.com/examples/martin-luther-and-the-reformation/