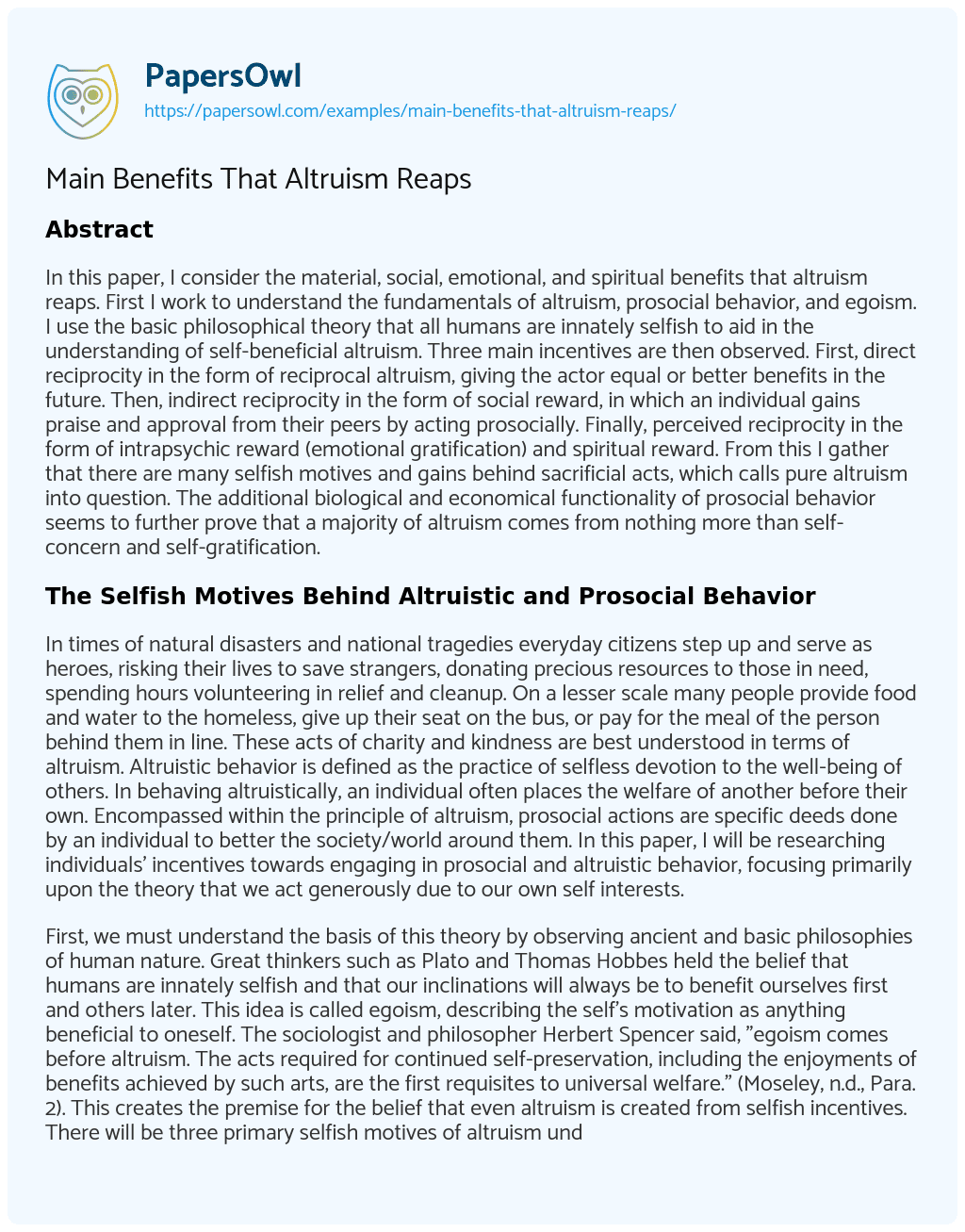 In this paper, I consider the material, social, emotional, and spiritual benefits that altruism reaps. First I work to understand the fundamentals of altruism, prosocial behavior, and egoism. I use the basic philosophical theory that all humans are innately selfish to aid in the understanding of self-beneficial altruism. Three main incentives are then observed. First, direct reciprocity in the form of reciprocal altruism, giving the actor equal or better benefits in the future. Then, indirect reciprocity in the form of social reward, in which an individual gains praise and approval from their peers by acting prosocially. Finally, perceived reciprocity in the form of intrapsychic reward (emotional gratification) and spiritual reward. From this I gather that there are many selfish motives and gains behind sacrificial acts, which calls pure altruism into question. The additional biological and economical functionality of prosocial behavior seems to further prove that a majority of altruism comes from nothing more than self-concern and self-gratification.

The Selfish Motives Behind Altruistic and Prosocial Behavior

In times of natural disasters and national tragedies everyday citizens step up and serve as heroes, risking their lives to save strangers, donating precious resources to those in need, spending hours volunteering in relief and cleanup. On a lesser scale many people provide food and water to the homeless, give up their seat on the bus, or pay for the meal of the person behind them in line. These acts of charity and kindness are best understood in terms of altruism. Altruistic behavior is defined as the practice of selfless devotion to the well-being of others. In behaving altruistically, an individual often places the welfare of another before their own. Encompassed within the principle of altruism, prosocial actions are specific deeds done by an individual to better the society/world around them. In this paper, I will be researching individuals’ incentives towards engaging in prosocial and altruistic behavior, focusing primarily upon the theory that we act generously due to our own self interests.

First, we must understand the basis of this theory by observing ancient and basic philosophies of human nature. Great thinkers such as Plato and Thomas Hobbes held the belief that humans are innately selfish and that our inclinations will always be to benefit ourselves first and others later. This idea is called egoism, describing the self’s motivation as anything beneficial to oneself. The sociologist and philosopher Herbert Spencer said, “egoism comes before altruism. The acts required for continued self-preservation, including the enjoyments of benefits achieved by such arts, are the first requisites to universal welfare.” (Moseley, n.d., Para. 2). This creates the premise for the belief that even altruism is created from selfish incentives. There will be three primary selfish motives of altruism under observation: reciprocal altruism, social reward, and intrapsychic or perceived reward.

Arguably the  most common form of self-beneficial altruism is reciprocal altruism. Since humans are indisputably social, cooperation in itself reaps many personal gains and is therefore a strong motivator for behaving in a way beneficial to the harmony of the group. “Most often, altruistic behavior is seen to emerge only when a net benefit of equal or greater return is expected at some future time. Thus, apparent altruism may reflect only a form of ‘enlightened self-interest'” (Losoco, 1986, p. 328). From an evolutionary standpoint, these acts of sharing and sacrifice are extremely important to personal success. Historically, “personal rewards of altruism include reduced likelihood of dangerous conflict, help in overcoming problems caused by scarce resources, and foundations for people to form alliances and constrain more dominant individuals.” (Gilovich, Keltner, Chen & Nisbett, 2015, p. 543) . Similarly, economists understand the personal importance of prosocial behavior, especially for individuals living in low socioeconomic environments. It is theorized that by giving to their community, they are forming personal insurance or safety nets in preparation for the economic or resource fluctuations that they are likely to be subjected to;

Behavioral ecologists studying food-sharing in preindustrial societies have made the same point. People might invest in prosocial behavior as an insurance against poor hunting luck (Cashdan 1985; Gurven, Hill et al. 2000; Kaplan and Hill 1985). Foragers who subsist only from their own effort are more likely to experience greater daily fluctuations in food consumption. By pooling resources, foragers reduce the variability in their personal food consumption. Therefore, a forager might share food with others because sharing helps to smooth or protect the forager’s own food consumption against idiosyncratic income shocks. (Cashdan 1985; Gurven, Hill et al. 2000; Kaplan and Hill 1985) (Garc?­a, Godoy, Vadez, Huanca & Leonard, 2006, p. 84) .

This, like other studies, proves a beneficial correlation between low economic status and higher prosocial tendencies. Someone with less is likely to give more because they require more help than someone of higher economic status. A main drive behind their sacrifice is therefore more easily understood as reciprocal altruism.

Reciprocal altruism is not exclusive to low socioeconomic environments; it is very prevalent in technologically advanced and developed societies as well. The idea is passed down to our children during their developmental phases, “Do unto others as you would have them do unto you; treat others how you want to be treated.”  Examples of this occur every day, even in simple acts such as sharing a packed lunch to later receive snacks, or taking in the neighbor’s mail while they are out of town, so that they will do the same for you.

Giving to later receive is labeled direct reciprocity, but indirect reciprocity is also a powerful selfish motivator behind altruistic behavior. “Both field work (Smith & Bird 2000) and laboratory studies (Milinski, Semmann, & Krambeck 2002a, 2002b) support the notion that individuals confer important advantages on those who act prosocially toward others, i.e., they reciprocate benefactors indirectly,” (Simpson & Willer, 2008). The main form of indirect reciprocity is termed social reward, and occurs when someone does good to receive praise and approval from others. This is especially prevalent in modern social media sites, where people record themselves doing good deeds to accumulate likes, shares, and admiration.

One way in which many researchers attempt to test unbiased altruism is by removing any form of social recognition or reward. By making the subject anonymous, they remove the selfish incentives of reciprocal altruism and social reward;

Yet, even in anonymous settings in which individuals cannot reap material or social benefits, it is possible that good deeds are still driven by selfish desires. Rather than being motivated to reduce the suffering of others, individuals may instead be motivated by intrapsychic rewards, such as feeling good for having done a good deed (Andreoni,1990) or experiencing relief from distress caused by witnessing suffering (Cialdini, Darby, & Vincent, 1973; Cialdini et al.,1987). (Barasch, Levine, Berman, & Small, 2014, p. 393) .

The concept of helping others to relieve oneself of guilt and discomfort is termed personal distress (Gilovich, et al., 2015, p. 525) . Since humans are naturally empathetic to our own kind and those we relate to, when we see others suffering, we experience great discomfort. When we see a particularly sad story in which someone cries, we are likely to cry. When someone humiliates themselves we feel secondhand embarrassment. Since we do not wish to feel the shared discomfort, we take action. “The most direct way to alleviate our own personal distress is to reduce the distress of the other person”. (Gilovich, et al., 2015, p. 526) . Another selfish motive to altruism discussed in the quote above is the effect of helpers high. This selfish motive to prosocial behavior involves boosting one’s own self-image by doing good. Acts of charity can create bursts of energy and boosts in self-esteem or ego. Though both of these factors can encourage selfless acts, the initial motivation is produced by self-interest.

Even without the promise of social or material reward, people are driven to act altruistically for the promise of some sort of higher power/heavenly reward. Religious believers act prosaically to gain entrance to “heaven” and be rewarded for their good deeds. Similarly, many individuals act altruistically due to a belief in karma, by doing good they expect to be given good. The power of spiritual belief can be seen in studies such as this: “Participants in the neutral prime condition -given words with no religious meaning or connotation- were more than twice as likely to give nothing to a stranger, compared to those in the religious prime condition -given words like “divine” or “sacred”- (36% vs 16%). By contrast, people who were primed with religious concepts were more than four times as likely to treat a stranger as an equal by giving half of the money to the stranger (52% vs 12%). (Gilovich, et al., 2015, p. 540) . This study helps reveal the impact of perceived higher rewards or consequences in prosocial behavior.

As we can see, behaving in an apparently selfless manner reaps many personal benefits, and therefore the pure altruism of these acts must be questioned. Both the biological and economical functionality of prosocial acts seems to exist, at least at a basic level, to protect one’s own self. There are many conscious forms of self-beneficial prosocial behaviors, such as reciprocal altruism, in which an individual directly receives an equal or greater benefit to their efforts in a later time, and social reward, in which one receives indirect social benefits from behaving sacrificially. There are also many forms of unconscious or innocent self-gratifying motivations, such as the desire to reap emotional peace or satisfaction, and the desire for higher spiritual rewards such as good karma or a good afterlife. As Kenrick (1991) explains, “What all this research suggests, then, is that to find true altruism, one at least needs to sift through a lot of disguised selfishness. How much is left is debatable, but seemingly small.”

A Research on Altruism

The Modification of Altruism in Science

Question of the Existence of True Altruism