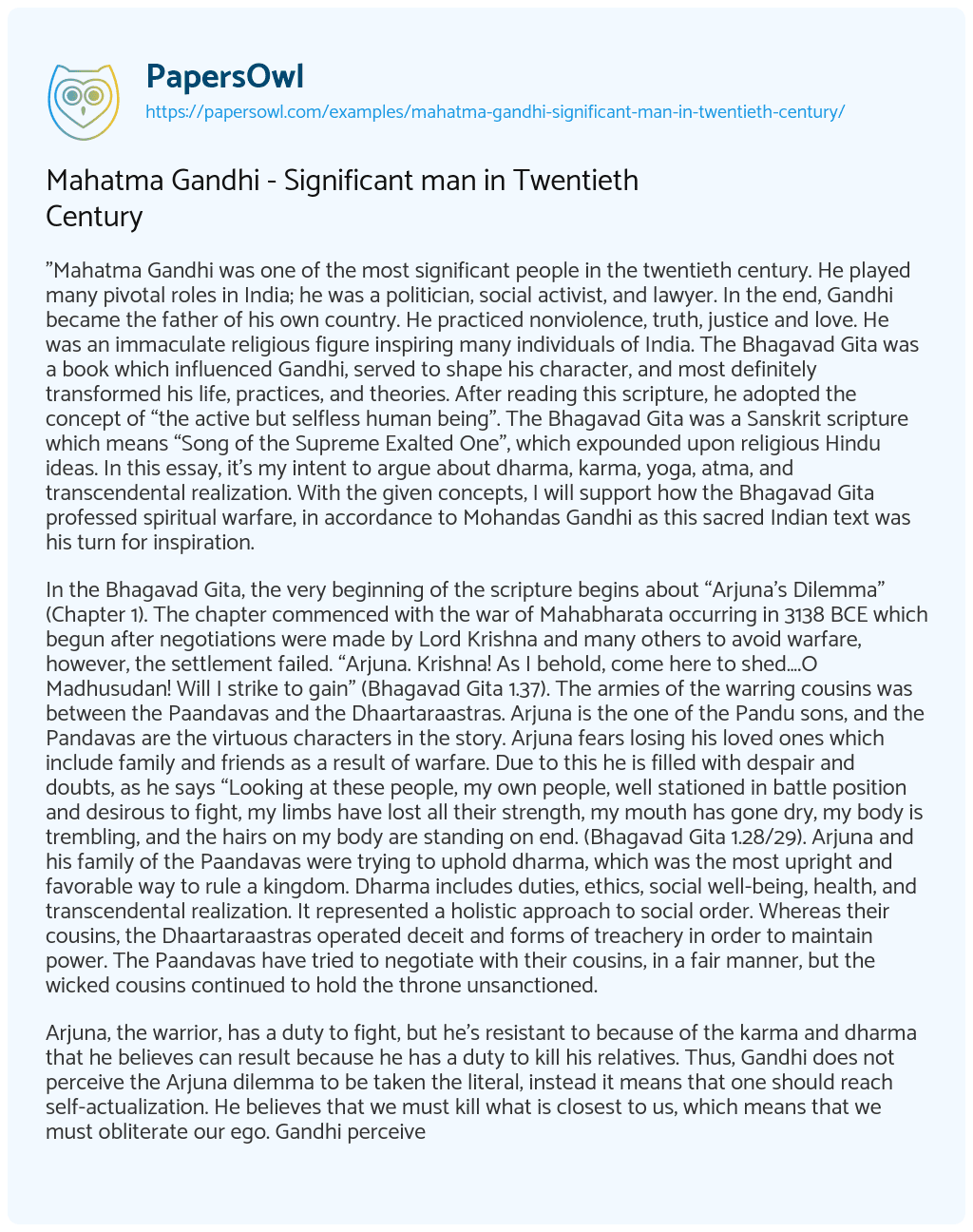 “Mahatma Gandhi was one of the most significant people in the twentieth century. He played many pivotal roles in India; he was a politician, social activist, and lawyer. In the end, Gandhi became the father of his own country. He practiced nonviolence, truth, justice and love. He was an immaculate religious figure inspiring many individuals of India. The Bhagavad Gita was a book which influenced Gandhi, served to shape his character, and most definitely transformed his life, practices, and theories. After reading this scripture, he adopted the concept of “the active but selfless human being”. The Bhagavad Gita was a Sanskrit scripture which means “Song of the Supreme Exalted One”, which expounded upon religious Hindu ideas. In this essay, it’s my intent to argue about dharma, karma, yoga, atma, and transcendental realization. With the given concepts, I will support how the Bhagavad Gita professed spiritual warfare, in accordance to Mohandas Gandhi as this sacred Indian text was his turn for inspiration.

In the Bhagavad Gita, the very beginning of the scripture begins about “Arjuna’s Dilemma” (Chapter 1). The chapter commenced with the war of Mahabharata occurring in 3138 BCE which begun after negotiations were made by Lord Krishna and many others to avoid warfare, however, the settlement failed. “Arjuna. Krishna! As I behold, come here to shed….O Madhusudan! Will I strike to gain” (Bhagavad Gita 1.37). The armies of the warring cousins was between the Paandavas and the Dhaartaraastras. Arjuna is the one of the Pandu sons, and the Pandavas are the virtuous characters in the story. Arjuna fears losing his loved ones which include family and friends as a result of warfare. Due to this he is filled with despair and doubts, as he says “Looking at these people, my own people, well stationed in battle position and desirous to fight, my limbs have lost all their strength, my mouth has gone dry, my body is trembling, and the hairs on my body are standing on end. (Bhagavad Gita 1.28/29). Arjuna and his family of the Paandavas were trying to uphold dharma, which was the most upright and favorable way to rule a kingdom. Dharma includes duties, ethics, social well-being, health, and transcendental realization. It represented a holistic approach to social order. Whereas their cousins, the Dhaartaraastras operated deceit and forms of treachery in order to maintain power. The Paandavas have tried to negotiate with their cousins, in a fair manner, but the wicked cousins continued to hold the throne unsanctioned.

Arjuna, the warrior, has a duty to fight, but he’s resistant to because of the karma and dharma that he believes can result because he has a duty to kill his relatives. Thus, Gandhi does not perceive the Arjuna dilemma to be taken the literal, instead it means that one should reach self-actualization. He believes that we must kill what is closest to us, which means that we must obliterate our ego. Gandhi perceives the battlefield story as one that expresses our inner struggles to vanquish self-impulses such as anger or greed. The concept of nonviolence arises because Gandhi believes that Arjuna is not opposed to killing the enemy but is recoiled from killing his own family.

The second chapter of the Bhagavad Gita demonstrates the central essence of the whole teaching of the Gita. It commenced with the immutable concept of atma, meaning the subtle self or soul within, a concept beyond birth or even death. If one can master this concept, success will emerge. Arjuna is also advised on pivotal subjects which shape the scripture, as well as Gandhi’s inspiration–karma, the immortal nature of the soul, and yoga. Krishna begins to feel sympathy of Arjuna’s pain and state of suffering, Arjuna gets offended after Krishna calls him out for his grievances, after this, he decides to ask Krishna for advice to help him solve his conflict. Krishna then gives his words of wisdom which serve to explain the truth of wholeness that a wise individual would encompass: “Being steadfast in Yoga, Dhananjaya, perform actions, abandoning attachment, remaining unconcerned as regards success and failure. This evenness of mind (in regard to success and failure) is known as Yoga.” (Bhagavad Gita 2.48).

For Gandhi these notions were consequential, as the Bhagavad Gita offers alternatives to a spiritual seeker, karma yoga was a personal service which is rendered to others without any thought of reward. All actions with this are gifts to the absolute, and the absolute is a source of all actions. Yoga was a path that led to spiritual realization, his theory of nonviolence didn’t only extend to the political level, rather it was rooted and grounded in the spiritual. His belief was that an individual who practiced yoga would inevitably be endowed with moral purity.

The Vedas deal with the three Gunas, “Be thou free, O Arjuna, from the triad of the Gunas, free from the pairs of opposites, ever-balanced, free from (the thought of) getting and keeping and established in the Self.” (Bhagavad Gita 2.45). Krishna was the differentiating between body and Atman. Gandhi was compassionate about becoming an individual with sufficient diligence. As an individual learns about killing for violence, one must be cognizant of the art of dying for nonviolence. One who has seeked refuge into their lord will have a glance of Atman which transcend the body and shed love of the corpse. Nonviolence is needed for the protection of the Atman, as well as preservation of an individual’s honor and dignity. Atman is an essential concept to convey Gandhi’s objective of spiritual warfare and an honest spiritual search for god.”

Mahatma Gandhi and the Gita