Loneliness is the Universal Language 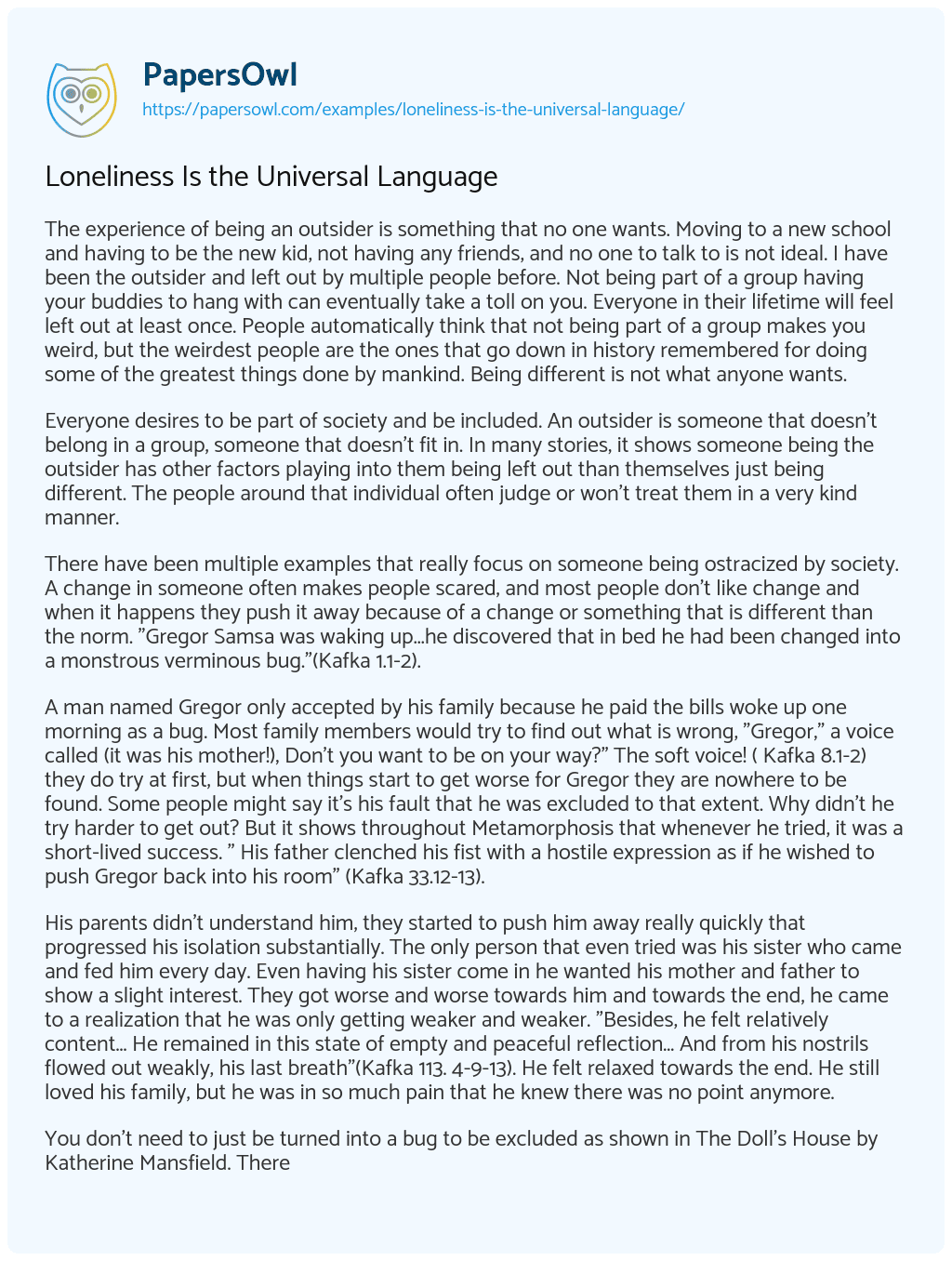 The experience of being an outsider is something that no one wants. Moving to a new school and having to be the new kid, not having any friends, and no one to talk to is not ideal. I have been the outsider and left out by multiple people before. Not being part of a group having your buddies to hang with can eventually take a toll on you. Everyone in their lifetime will feel left out at least once. People automatically think that not being part of a group makes you weird, but the weirdest people are the ones that go down in history remembered for doing some of the greatest things done by mankind. Being different is not what anyone wants.

Everyone desires to be part of society and be included. An outsider is someone that doesn’t belong in a group, someone that doesn’t fit in. In many stories, it shows someone being the outsider has other factors playing into them being left out than themselves just being different. The people around that individual often judge or won’t treat them in a very kind manner.

There have been multiple examples that really focus on someone being ostracized by society. A change in someone often makes people scared, and most people don’t like change and when it happens they push it away because of a change or something that is different than the norm. “Gregor Samsa was waking up…he discovered that in bed he had been changed into a monstrous verminous bug.”(Kafka 1.1-2).

A man named Gregor only accepted by his family because he paid the bills woke up one morning as a bug. Most family members would try to find out what is wrong, “Gregor,” a voice called (it was his mother!), Don’t you want to be on your way?” The soft voice! ( Kafka 8.1-2) they do try at first, but when things start to get worse for Gregor they are nowhere to be found. Some people might say it’s his fault that he was excluded to that extent. Why didn’t he try harder to get out? But it shows throughout Metamorphosis that whenever he tried, it was a short-lived success. ” His father clenched his fist with a hostile expression as if he wished to push Gregor back into his room” (Kafka 33.12-13).

His parents didn’t understand him, they started to push him away really quickly that progressed his isolation substantially. The only person that even tried was his sister who came and fed him every day. Even having his sister come in he wanted his mother and father to show a slight interest. They got worse and worse towards him and towards the end, he came to a realization that he was only getting weaker and weaker. “Besides, he felt relatively content… He remained in this state of empty and peaceful reflection… And from his nostrils flowed out weakly, his last breath”(Kafka 113. 4-9-13). He felt relaxed towards the end. He still loved his family, but he was in so much pain that he knew there was no point anymore.

You don’t need to just be turned into a bug to be excluded as shown in The Doll’s House by Katherine Mansfield. There are two girls that have done nothing wrong that are completely shunned by other girls and parents that live in the same area. They have been kicked aside every time due to the girl’s parents. “daughters of a spry, hard-working little washerwoman… where was Mr. Kelvey?…everybody said he was in prison”(Mansfield 16.1-2-3).

Loneliness Is the Universal Language. (2020, Apr 21). Retrieved from https://papersowl.com/examples/loneliness-is-the-universal-language/