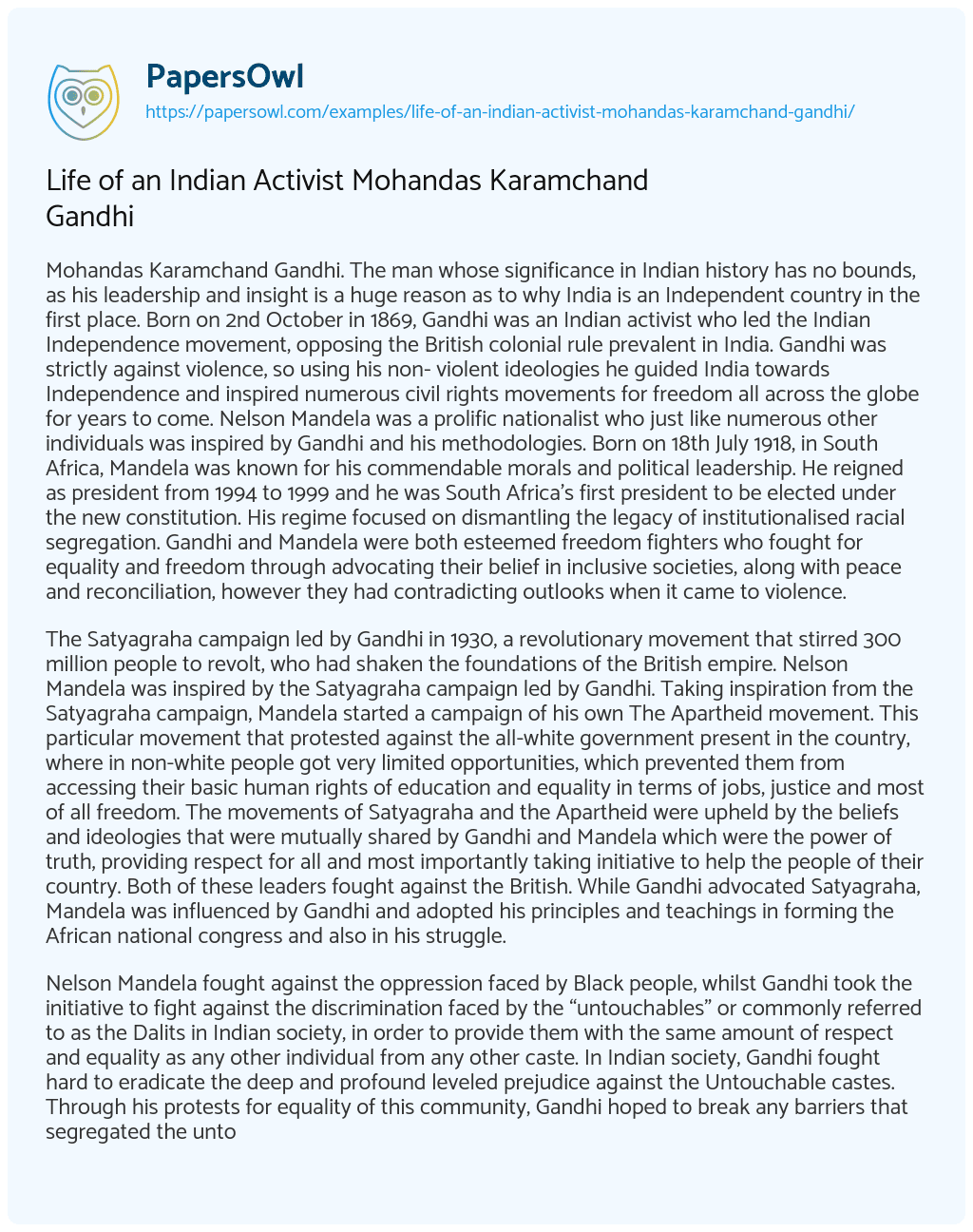 Mohandas Karamchand Gandhi. The man whose significance in Indian history has no bounds, as his leadership and insight is a huge reason as to why India is an Independent country in the first place. Born on 2nd October in 1869, Gandhi was an Indian activist who led the Indian Independence movement, opposing the British colonial rule prevalent in India. Gandhi was strictly against violence, so using his non- violent ideologies he guided India towards Independence and inspired numerous civil rights movements for freedom all across the globe for years to come. Nelson Mandela was a prolific nationalist who just like numerous other individuals was inspired by Gandhi and his methodologies. Born on 18th July 1918, in South Africa, Mandela was known for his commendable morals and political leadership. He reigned as president from 1994 to 1999 and he was South Africa’s first president to be elected under the new constitution. His regime focused on dismantling the legacy of institutionalised racial segregation. Gandhi and Mandela were both esteemed freedom fighters who fought for equality and freedom through advocating their belief in inclusive societies, along with peace and reconciliation, however they had contradicting outlooks when it came to violence.

The Satyagraha campaign led by Gandhi in 1930, a revolutionary movement that stirred 300 million people to revolt, who had shaken the foundations of the British empire. Nelson Mandela was inspired by the Satyagraha campaign led by Gandhi. Taking inspiration from the Satyagraha campaign, Mandela started a campaign of his own The Apartheid movement. This particular movement that protested against the all-white government present in the country, where in non-white people got very limited opportunities, which prevented them from accessing their basic human rights of education and equality in terms of jobs, justice and most of all freedom. The movements of Satyagraha and the Apartheid were upheld by the beliefs and ideologies that were mutually shared by Gandhi and Mandela which were the power of truth, providing respect for all and most importantly taking initiative to help the people of their country. Both of these leaders fought against the British. While Gandhi advocated Satyagraha, Mandela was influenced by Gandhi and adopted his principles and teachings in forming the African national congress and also in his struggle.

Nelson Mandela fought against the oppression faced by Black people, whilst Gandhi took the initiative to fight against the discrimination faced by the “untouchables” or commonly referred to as the Dalits in Indian society, in order to provide them with the same amount of respect and equality as any other individual from any other caste. In Indian society, Gandhi fought hard to eradicate the deep and profound leveled prejudice against the Untouchable castes. Through his protests for equality of this community, Gandhi hoped to break any barriers that segregated the untouchables from the remainder of the Hindu community. Similarly, Nelson Mandela yet again took inspiration from Gandhi and through his protests against black discrimination intended to converge and gain equality amongst the white community along with the black community. In the year 1893 when Gandhi visited South Africa, had begun to work closely with laborers in South Africa, his understanding of and sympathy for the poor, many of whom were untouchables in South Africa itself, deepened. This lead to him acting as a strong supporter and an advocate for the “untouchables”. For Nelson Mandela, Gandhi truly created such a great influence on people through his belief of undying prejudice regarding inequality and racial discrimination, and his determined personality that led their nation of South Africa come at a peaceful transition to a government which, for the first time, included all South Africans.

Although Mandela was inspired by Gandhi’s non-violent movement, he gave his consent/agreement and support to violent protests against the Apartheid movement. The African National Congress government were fighting against the Apartheid movement and the segregation policies of the racial African government, whereas the Indian National Congress government was fighting against majorly the British rule in India. This is suggestive of how the perspectives of Gandhi and Mandela might not fully converge. Gandhi was always a firm believer in non- violent methodologies in order to acquire what he thought the people needed or demanded. Through Gandhi’s actions one can also evidently observe how he was sure and undoubtful, through the adoption of traditionally acclaimed forms of movements, he had enough constraint to loosen government jurisdiction. Whereas, Mandela happens to have believed in a more active and involved, militant style of protest, that depicted actions that punished the authorities. He along with his partners during imprisonment in Robben Island questioned the motif behind hunger strike, mainly since it was nearly impossible to alert individuals on the outside, when such a strike was being conducted.