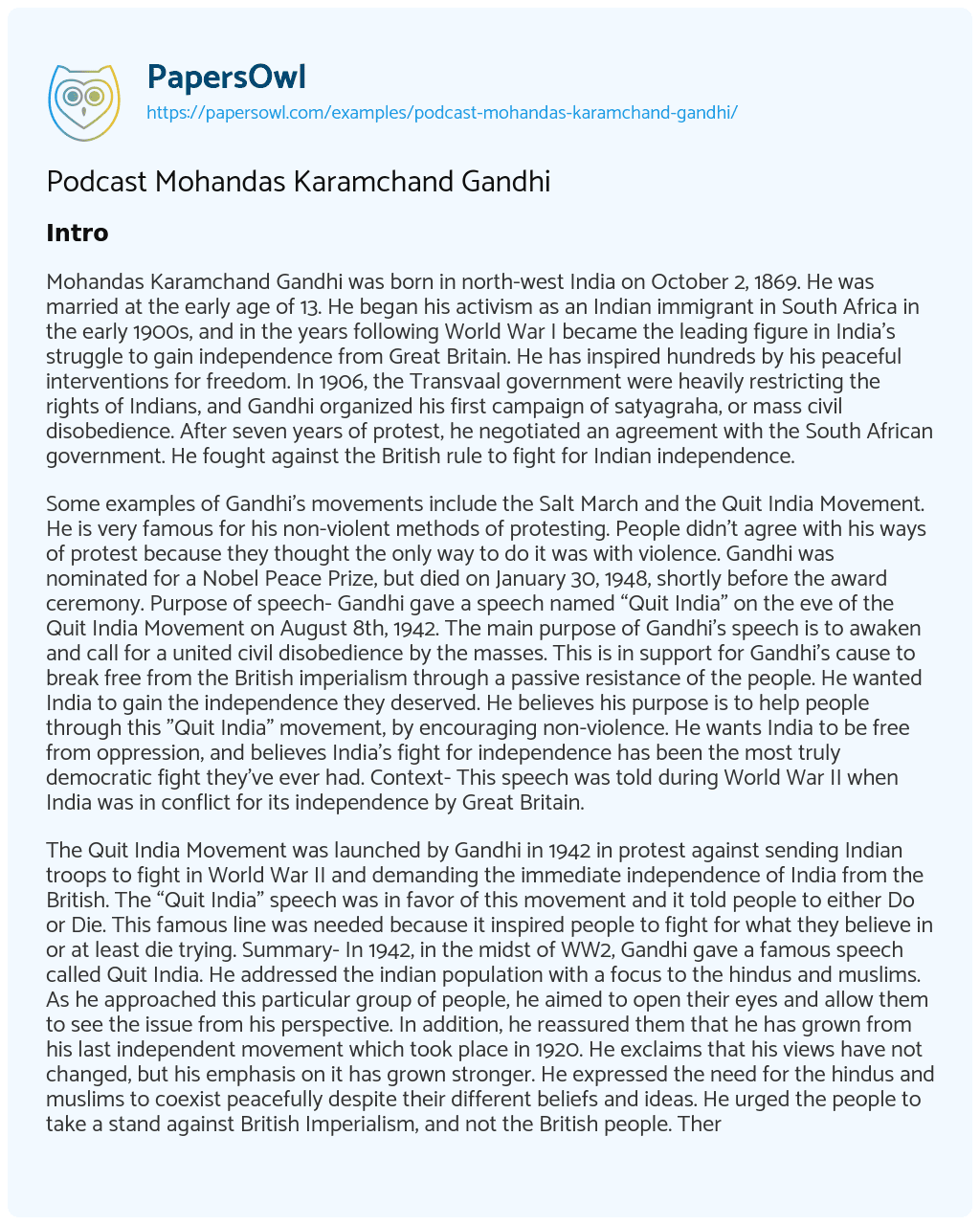 Mohandas Karamchand Gandhi was born in north-west India on October 2, 1869. He was married at the early age of 13. He began his activism as an Indian immigrant in South Africa in the early 1900s, and in the years following World War I became the leading figure in India’s struggle to gain independence from Great Britain. He has inspired hundreds by his peaceful interventions for freedom. In 1906, the Transvaal government were heavily restricting the rights of Indians, and Gandhi organized his first campaign of satyagraha, or mass civil disobedience. After seven years of protest, he negotiated an agreement with the South African government. He fought against the British rule to fight for Indian independence.

Some examples of Gandhi’s movements include the Salt March and the Quit India Movement. He is very famous for his non-violent methods of protesting. People didn’t agree with his ways of protest because they thought the only way to do it was with violence. Gandhi was nominated for a Nobel Peace Prize, but died on January 30, 1948, shortly before the award ceremony. Purpose of speech- Gandhi gave a speech named “Quit India” on the eve of the Quit India Movement on August 8th, 1942. The main purpose of Gandhi’s speech is to awaken and call for a united civil disobedience by the masses. This is in support for Gandhi’s cause to break free from the British imperialism through a passive resistance of the people. He wanted India to gain the independence they deserved. He believes his purpose is to help people through this “Quit India” movement, by encouraging non-violence. He wants India to be free from oppression, and believes India’s fight for independence has been the most truly democratic fight they’ve ever had. Context- This speech was told during World War II when India was in conflict for its independence by Great Britain.

The Quit India Movement was launched by Gandhi in 1942 in protest against sending Indian troops to fight in World War II and demanding the immediate independence of India from the British. The “Quit India” speech was in favor of this movement and it told people to either Do or Die. This famous line was needed because it inspired people to fight for what they believe in or at least die trying. Summary- In 1942, in the midst of WW2, Gandhi gave a famous speech called Quit India. He addressed the indian population with a focus to the hindus and muslims. As he approached this particular group of people, he aimed to open their eyes and allow them to see the issue from his perspective. In addition, he reassured them that he has grown from his last independent movement which took place in 1920. He exclaims that his views have not changed, but his emphasis on it has grown stronger. He expressed the need for the hindus and muslims to coexist peacefully despite their different beliefs and ideas. He urged the people to take a stand against British Imperialism, and not the British people. There must be a non violent fight for India’s independence.

During this movement, Gandhi made it clear that although the issue of segregation doesn’t take place everywhere, it does still exist. His drive and determination to resolve this issue is rooted by the gift God gave him. This gift allows him to protest non-violently and be successful as well.