Let him who Offend me Beware 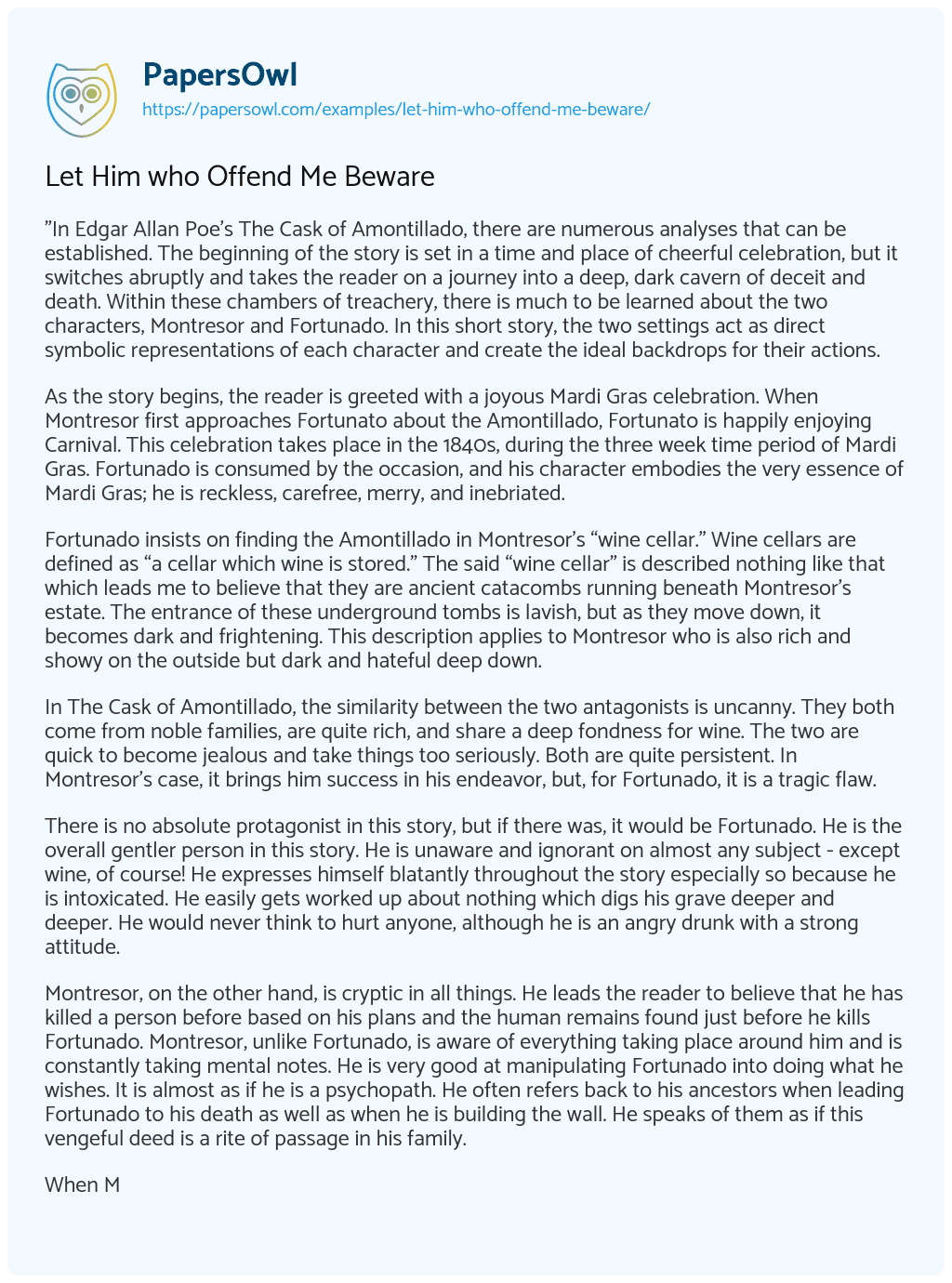 “In Edgar Allan Poe’s The Cask of Amontillado, there are numerous analyses that can be established. The beginning of the story is set in a time and place of cheerful celebration, but it switches abruptly and takes the reader on a journey into a deep, dark cavern of deceit and death. Within these chambers of treachery, there is much to be learned about the two characters, Montresor and Fortunado. In this short story, the two settings act as direct symbolic representations of each character and create the ideal backdrops for their actions.

As the story begins, the reader is greeted with a joyous Mardi Gras celebration. When Montresor first approaches Fortunato about the Amontillado, Fortunato is happily enjoying Carnival. This celebration takes place in the 1840s, during the three week time period of Mardi Gras. Fortunado is consumed by the occasion, and his character embodies the very essence of Mardi Gras; he is reckless, carefree, merry, and inebriated.

Fortunado insists on finding the Amontillado in Montresor’s “wine cellar.” Wine cellars are defined as “a cellar which wine is stored.” The said “wine cellar” is described nothing like that which leads me to believe that they are ancient catacombs running beneath Montresor’s estate. The entrance of these underground tombs is lavish, but as they move down, it becomes dark and frightening. This description applies to Montresor who is also rich and showy on the outside but dark and hateful deep down.

In The Cask of Amontillado, the similarity between the two antagonists is uncanny. They both come from noble families, are quite rich, and share a deep fondness for wine. The two are quick to become jealous and take things too seriously. Both are quite persistent. In Montresor’s case, it brings him success in his endeavor, but, for Fortunado, it is a tragic flaw.

There is no absolute protagonist in this story, but if there was, it would be Fortunado. He is the overall gentler person in this story. He is unaware and ignorant on almost any subject – except wine, of course! He expresses himself blatantly throughout the story especially so because he is intoxicated. He easily gets worked up about nothing which digs his grave deeper and deeper. He would never think to hurt anyone, although he is an angry drunk with a strong attitude.

Montresor, on the other hand, is cryptic in all things. He leads the reader to believe that he has killed a person before based on his plans and the human remains found just before he kills Fortunado. Montresor, unlike Fortunado, is aware of everything taking place around him and is constantly taking mental notes. He is very good at manipulating Fortunado into doing what he wishes. It is almost as if he is a psychopath. He often refers back to his ancestors when leading Fortunado to his death as well as when he is building the wall. He speaks of them as if this vengeful deed is a rite of passage in his family.

When Montresor is building the wall to separate Fortunado from himself, he pauses multiple times to reflect on the situation. This wall is not only being built by stone but also being built internally to block out all of Montresor’s hate and envy. Montresor screams when Fortunado begins showing the feelings of pain that Montresor once felt, and Montresor lets go of the pain Fortunado caused him. The break Montresor takes just before placing the last stone seems to be closure for him internally, and that is also the closure of the wall. The story ends with Montresor proclaiming, “In pace requiescat!”(Poe 66) This may be read as Montresor telling Fortunado to “rest in peace,” or it could be Montresor announcing that he will rest peacefully now that he has rid himself of Fortunado.

In the “wine cellar,” it is moist and dark, showing bad will for Fortunado initially because he has an awful cold. As they hike deeper into the cellar, the conditions only worsen. More foreboding appears with the family crest and sayings which state “Nemo me impune lacessit,” meaning, ”let him who would offend me, beware.” (Poe 52) These omens reveal that Montresor’s ancestors have a knack for revenge. Also, the crest alludes to the book of Genesis because it shows a snake biting a man’s heel or ankle. In the same way that the snake tempted Eve with the apple and lead to the downfall of mankind, Montresor is tempting Fortunado with the Amontillado which leads to Fortunado’s demise. The crest may also refer back to the war hero Achille from Greek mythology. He scraped his heal and brought defeat upon himself because his heal was where his strength lay. This is much like Fortunado in that his strength was an extensive knowledge about wine, but it was also his weakness.

This story is rich with symbolism, and Poe dares the reader to dig for deeper meanings. The only two characters in The Cask of Amontillado are coexisting enemies. They are opposites, yet share many qualities – like yin and yang. The plot of this seemingly simple story is actually very calculated and complex. After reading and dissecting The Cask of Amontillado, one can establish a direct symbolic tie between Fortunado and Mardi Gras as well as Montresor and the wine cellar.”

Let Him who Offend Me Beware. (2021, Jun 05). Retrieved from https://papersowl.com/examples/let-him-who-offend-me-beware/

The Cask of Amontillado Literary Analysis

“The Cask of Amontillado” Analysis