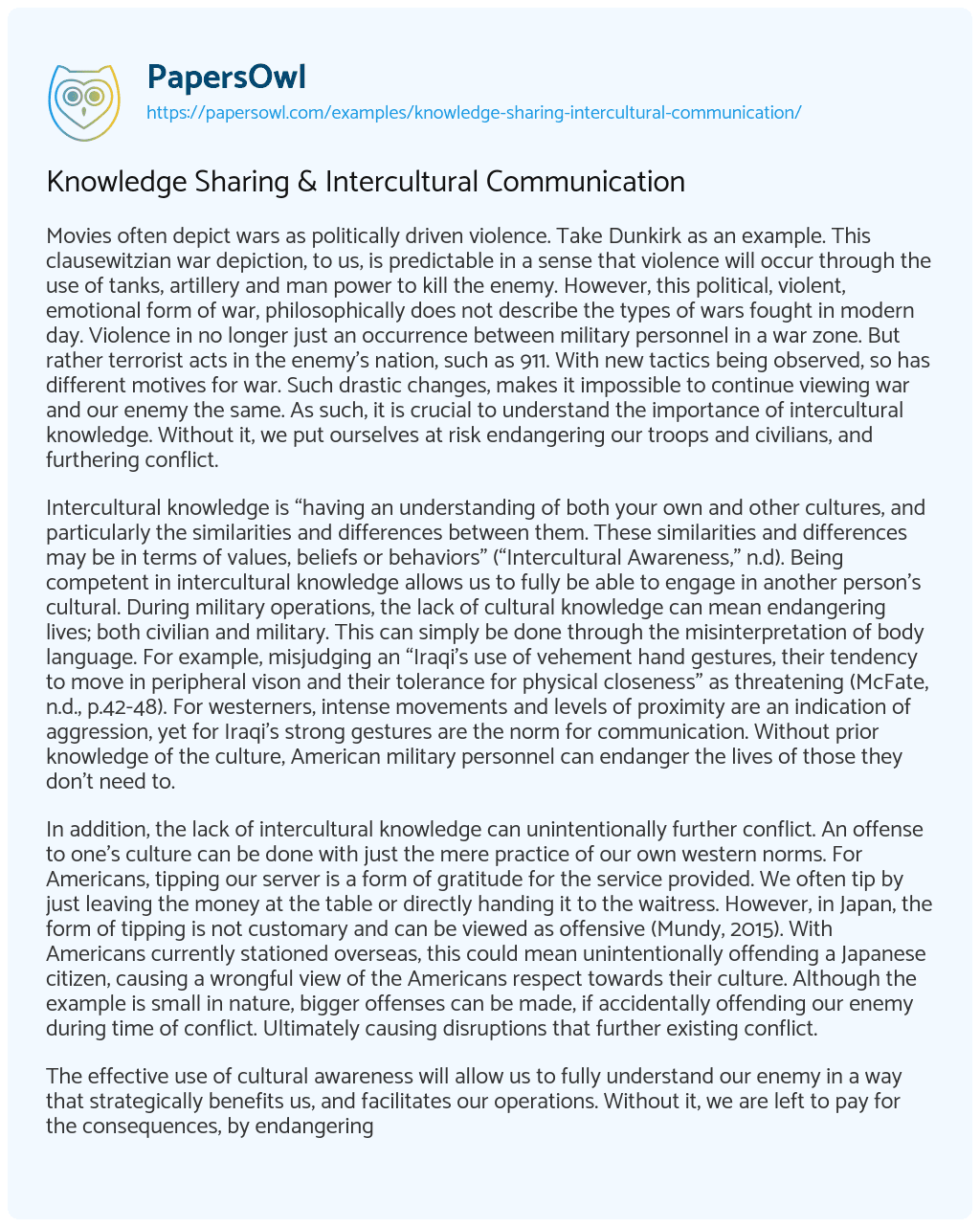 Movies often depict wars as politically driven violence. Take Dunkirk as an example. This clausewitzian war depiction, to us, is predictable in a sense that violence will occur through the use of tanks, artillery and man power to kill the enemy. However, this political, violent, emotional form of war, philosophically does not describe the types of wars fought in modern day. Violence in no longer just an occurrence between military personnel in a war zone. But rather terrorist acts in the enemy’s nation, such as 911. With new tactics being observed, so has different motives for war. Such drastic changes, makes it impossible to continue viewing war and our enemy the same. As such, it is crucial to understand the importance of intercultural knowledge. Without it, we put ourselves at risk endangering our troops and civilians, and furthering conflict.

Intercultural knowledge is “having an understanding of both your own and other cultures, and particularly the similarities and differences between them. These similarities and differences may be in terms of values, beliefs or behaviors” (“Intercultural Awareness,” n.d). Being competent in intercultural knowledge allows us to fully be able to engage in another person’s cultural. During military operations, the lack of cultural knowledge can mean endangering lives; both civilian and military. This can simply be done through the misinterpretation of body language. For example, misjudging an “Iraqi’s use of vehement hand gestures, their tendency to move in peripheral vison and their tolerance for physical closeness” as threatening (McFate, n.d., p.42-48). For westerners, intense movements and levels of proximity are an indication of aggression, yet for Iraqi’s strong gestures are the norm for communication. Without prior knowledge of the culture, American military personnel can endanger the lives of those they don’t need to.

In addition, the lack of intercultural knowledge can unintentionally further conflict. An offense to one’s culture can be done with just the mere practice of our own western norms. For Americans, tipping our server is a form of gratitude for the service provided. We often tip by just leaving the money at the table or directly handing it to the waitress. However, in Japan, the form of tipping is not customary and can be viewed as offensive (Mundy, 2015). With Americans currently stationed overseas, this could mean unintentionally offending a Japanese citizen, causing a wrongful view of the Americans respect towards their culture. Although the example is small in nature, bigger offenses can be made, if accidentally offending our enemy during time of conflict. Ultimately causing disruptions that further existing conflict.

The effective use of cultural awareness will allow us to fully understand our enemy in a way that strategically benefits us, and facilitates our operations. Without it, we are left to pay for the consequences, by endangering the lives of our troops and innocent civilians. Moreover, we can continue furthering conflict unintentionally, increasing the tensions of war.

Language Barrier as a Challenge of Intercultural Communication

Islam and the West Intercultural Altercation and Compatibility