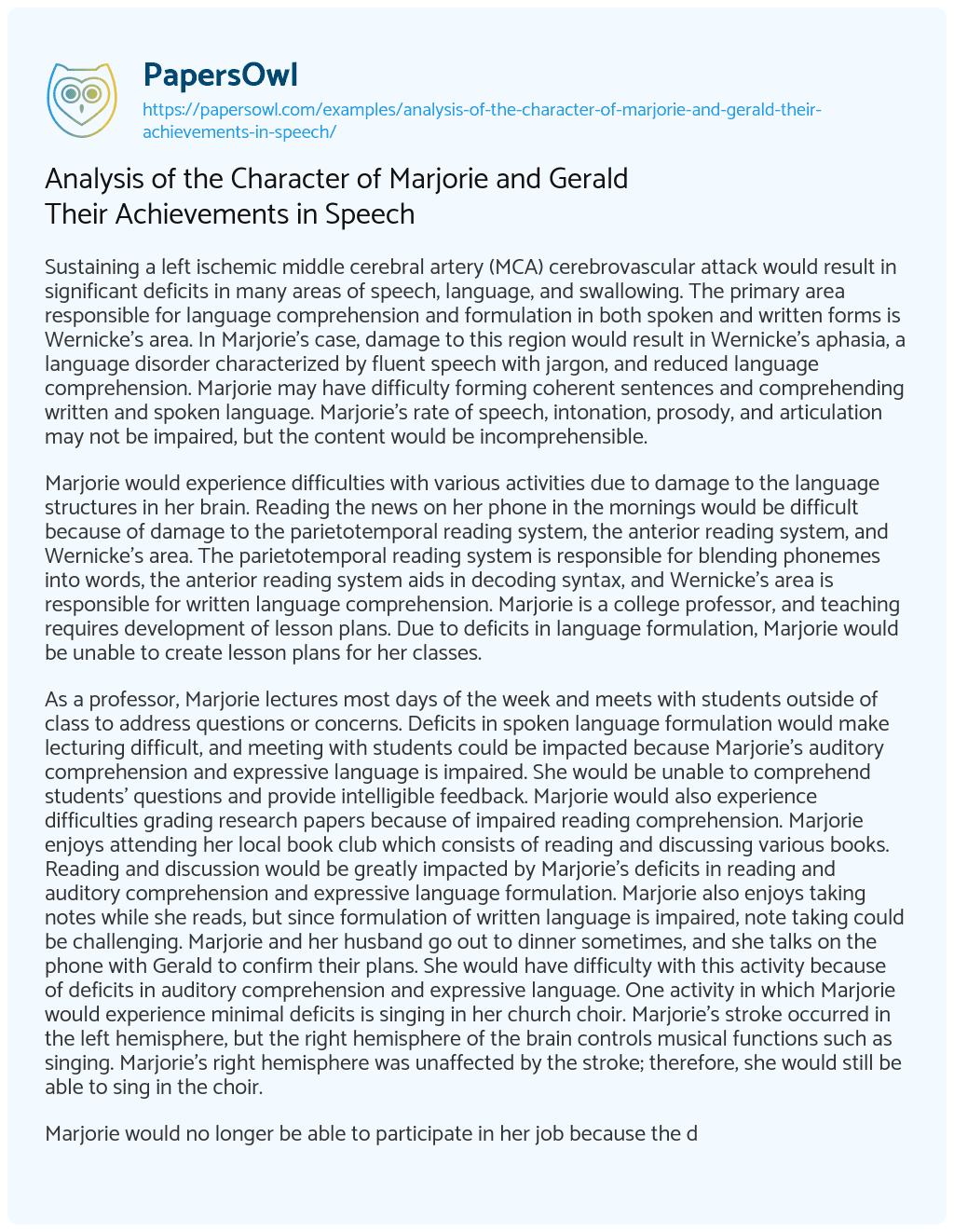 Sustaining a left ischemic middle cerebral artery (MCA) cerebrovascular attack would result in significant deficits in many areas of speech, language, and swallowing. The primary area responsible for language comprehension and formulation in both spoken and written forms is Wernicke’s area. In Marjorie’s case, damage to this region would result in Wernicke’s aphasia, a language disorder characterized by fluent speech with jargon, and reduced language comprehension. Marjorie may have difficulty forming coherent sentences and comprehending written and spoken language. Marjorie’s rate of speech, intonation, prosody, and articulation may not be impaired, but the content would be incomprehensible.

Marjorie would experience difficulties with various activities due to damage to the language structures in her brain. Reading the news on her phone in the mornings would be difficult because of damage to the parietotemporal reading system, the anterior reading system, and Wernicke’s area. The parietotemporal reading system is responsible for blending phonemes into words, the anterior reading system aids in decoding syntax, and Wernicke’s area is responsible for written language comprehension. Marjorie is a college professor, and teaching requires development of lesson plans. Due to deficits in language formulation, Marjorie would be unable to create lesson plans for her classes.

As a professor, Marjorie lectures most days of the week and meets with students outside of class to address questions or concerns. Deficits in spoken language formulation would make lecturing difficult, and meeting with students could be impacted because Marjorie’s auditory comprehension and expressive language is impaired. She would be unable to comprehend students’ questions and provide intelligible feedback. Marjorie would also experience difficulties grading research papers because of impaired reading comprehension. Marjorie enjoys attending her local book club which consists of reading and discussing various books. Reading and discussion would be greatly impacted by Marjorie’s deficits in reading and auditory comprehension and expressive language formulation. Marjorie also enjoys taking notes while she reads, but since formulation of written language is impaired, note taking could be challenging. Marjorie and her husband go out to dinner sometimes, and she talks on the phone with Gerald to confirm their plans. She would have difficulty with this activity because of deficits in auditory comprehension and expressive language. One activity in which Marjorie would experience minimal deficits is singing in her church choir. Marjorie’s stroke occurred in the left hemisphere, but the right hemisphere of the brain controls musical functions such as singing. Marjorie’s right hemisphere was unaffected by the stroke; therefore, she would still be able to sing in the choir.

Marjorie would no longer be able to participate in her job because the deficits from the stroke impact every aspect of her career. Reading comprehension, auditory comprehension, expressive language, and written language are all affected. Marjorie may continue to attend book club even though reading comprehension is impaired. Persons with Wernicke’s aphasia typically do not feel frustration because they have decreased self- awareness. They do not realize their language is meaningless and that their comprehension is impaired. However, members of book club may become frustrated with her attempts to participate in discussion. To alleviate frustration, the book club members should be educated about Wernicke’s aphasia and provided strategies to keep Marjorie engaged while still maintaining the flow of discussion during book club. Though Marjorie may still enjoy participating in social activities like going out to dinner with her husband, Gerald may find it difficult to eat out because he and Marjorie would not be able to have quality conversation.

Marjorie could still order for herself if a menu had pictures of each item, but most restaurants only feature pictures of specialty items. Since she has difficulties expressing herself and comprehending what others say it might be difficult for her to order. Though Marjorie may not feel frustration or negative emotions about her communicative limitations, it could be taxing for people in her life because conversations with her would be empty and nonsensical. Like the book club members, people in Marjorie’s life should be educated about her linguistic limitations and learn ways to include Marjorie in everyday activities. Gerald could consult with a speech- language pathologist to learn ways to effectively communicate with Marjorie and help others learn communicative strategies, as well. Despite her extensive linguistic deficits, Marjorie could still participate in her church choir. The right hemisphere was not affected by her stroke so her musical abilities would not be impaired.

Computerized conversational script training is a downloadable software program that allows people with aphasia to practice scripted conversations or monologues with the help of an animated virtual therapist. The treatment is successful with various types of aphasia, including Wernicke’s aphasia. The script training has three levels. The client starts the process by listening to the whole conversation. The virtual therapist moves his/her articulators to the patterns of natural speech to provide a model for the client. Then, each sentence of the client’s portion of the conversation is practiced multiple times.

The computerized script training resulted in improvements in grammar and rate of production of specific words practiced in the training. An increase in overall verbal productions from the person with aphasia was noted, and the program also led to an increase in participants’ confidence (Cherney & Halper, 2008). Though Marjorie’s confidence is most likely unaffected by her language deficits, this therapy could still be beneficial to her because she has fluent speech but produces neologisms and/or paraphasias. Practicing individual words could improve Marjorie’s expressive language. Her comprehension of written and spoken language is also impaired, and the treatment provides written and verbal components to expose the client to multiple language modalities. Marjorie’s lifestyle is drastically changed due to her stroke. Her career as a college professor involves lectures, developing lesson plans, grading papers, and meeting with students.

The computerized script training could help Marjorie improve her expressive language because it would allow her to practice lectures or conversations she may have had with students in the past. The program is highly individualized and could be programmed with lectures that Marjorie has given in class. The program would allow Marjorie to practice words, phrases, and conversations that are familiar and significant to her. The script training can improve language modalities across various situations, which is good for Marjorie because she is so active. She teaches, attends book club, talks on the phone, goes out to dinner with her husband, and sings in the church choir. Computerized script training can be monitored with periodical meetings with a licensed speech- language pathologist, which could be beneficial to Marjorie and her husband (Cherney & Halper, 2008). If Gerald has questions or concerns he could speak with the speech-language pathologist during their meetings, and the speech language pathologist could help develop new scripts and monitor Marjorie’s progress.

The speech-language pathologist should speak with Gerald about programming old lectures and book club discussions into the script training program to make it more individualized for Marjorie. Common conversations that Marjorie and Gerald might have at home or at dinner can be programmed as scripts, as well. The speech-language pathologist should be familiar with the material programmed into the system to better assess Marjorie’s progress throughout the script training. The speech-language pathologist should first teach Marjorie and Gerald how to use the program. Gerald should be trained alongside Marjorie so that he can help at home. Because Marjorie’s receptive language and reading comprehension are impaired Gerald should sit with Marjorie while she practices to ensure she is using the program appropriately. The speech- language pathologist can help Gerald identify correct and incorrect productions so that he can better assist Marjorie during practice at home. He can monitor her productions and recognize which words or sentences need to be repeated and help her navigate the program.

Gerald can provide positive reinforcement and encouragement for correct productions, and gently lead her back to individual words or sentences for additional practice when she produces utterances incorrectly. Marjorie should spend at least thirty minutes a day practicing the pre-recorded scripts. She would start by listening to the whole scripted conversation or monologue from start to finish. Next, she would practice each sentence that is part of her turn in the conversation. Each sentence appears on the screen, and Marjorie and the virtual therapist can practice the sentences in unison if necessary (Cherney & Halper, 2008). To provide a visual cue, each word lights up when spoken by the virtual therapist (Cherney & Halper, 2008). If Marjorie has trouble with specific words, she can practice them individually as many times as she needs to, and the virtual therapist provides a visual model by producing the word with appropriate oral movements (Cherney & Halper, 2008).

For example, Marjorie’s line might be, “Good morning, class.” She might produce, “Good morning, flast.” She would practice the sentence repeatedly with the help of the virtual therapist until she produces a closer approximation of, “Good morning, class.” If she still had trouble producing “class”, Gerald could help her return to the individual word section of the program to practice “class” multiple times. Finally, the conversation is practiced with the virtual therapist (Cherney & Halper, 2008). Marjorie and the virtual therapist take conversational turns in real time. At first, during conversational practice, each word is highlighted along with the virtual therapist’s productions to provide Marjorie with visual cueing (Cherney & Halper, 2008). As Marjorie’s expressive productions improve, the visual cues can be faded away. Marjorie can return to individual words or single sentences at any point if she has trouble during conversational practice. The computer program tracks daily and weekly practice and tracks how many times each sentence was practiced. Marjorie’s speech productions are audio-recorded so the speech-language pathologist can listen to the recordings during their meetings and assess her progress (Cherney & Halper, 2008).

Analysis of the Character of Marjorie and Gerald Their Achievements in Speech. (2022, Jun 22). Retrieved from https://papersowl.com/examples/analysis-of-the-character-of-marjorie-and-gerald-their-achievements-in-speech/