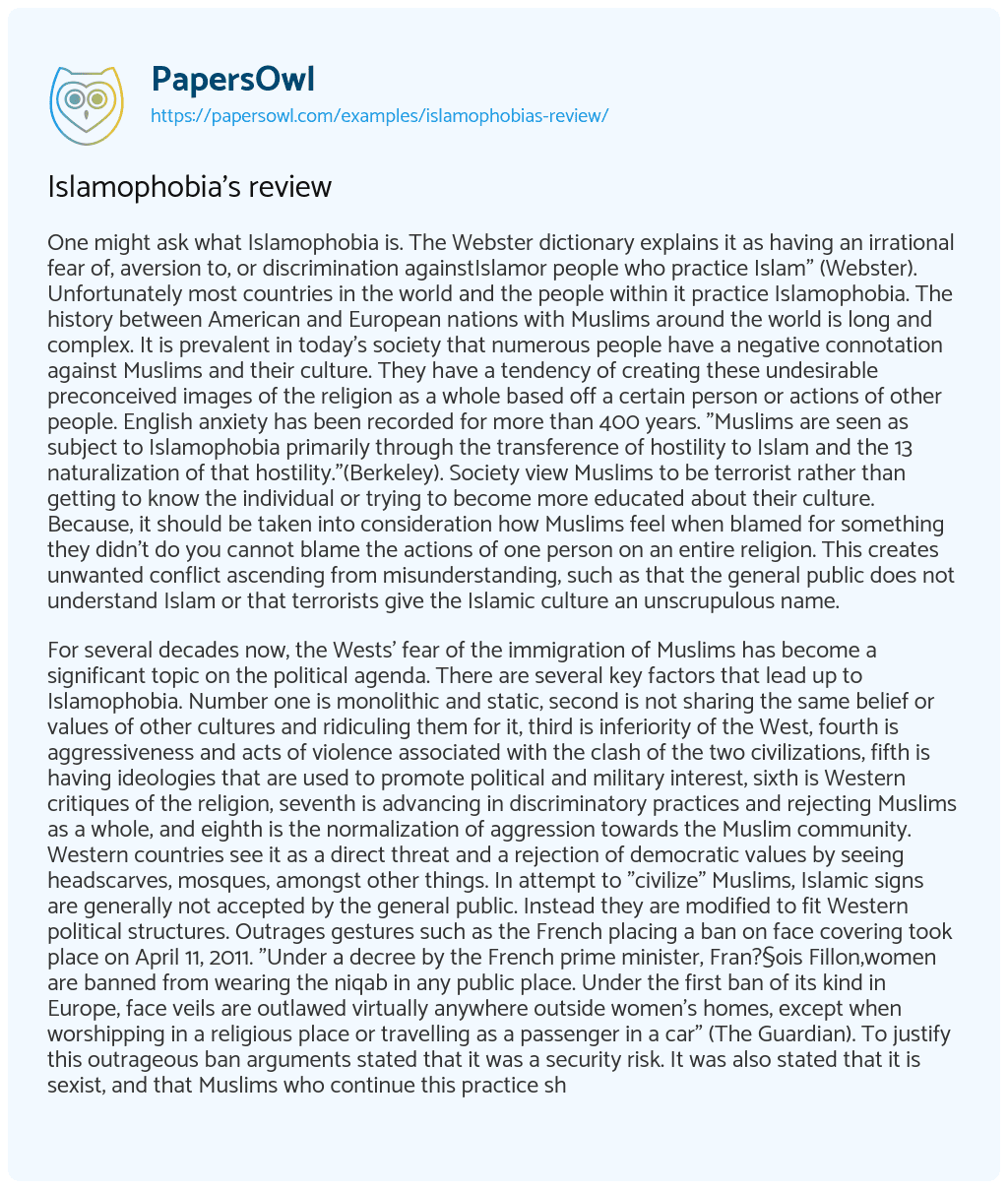 One might ask what Islamophobia is. The Webster dictionary explains it as having an irrational fear of, aversion to, or discrimination againstIslamor people who practice Islam” (Webster). Unfortunately most countries in the world and the people within it practice Islamophobia. The history between American and European nations with Muslims around the world is long and complex. It is prevalent in today’s society that numerous people have a negative connotation against Muslims and their culture. They have a tendency of creating these undesirable preconceived images of the religion as a whole based off a certain person or actions of other people. English anxiety has been recorded for more than 400 years. “Muslims are seen as subject to Islamophobia primarily through the transference of hostility to Islam and the 13 naturalization of that hostility.”(Berkeley). Society view Muslims to be terrorist rather than getting to know the individual or trying to become more educated about their culture. Because, it should be taken into consideration how Muslims feel when blamed for something they didn’t do you cannot blame the actions of one person on an entire religion. This creates unwanted conflict ascending from misunderstanding, such as that the general public does not understand Islam or that terrorists give the Islamic culture an unscrupulous name.

For several decades now, the Wests’ fear of the immigration of Muslims has become a significant topic on the political agenda. There are several key factors that lead up to Islamophobia. Number one is monolithic and static, second is not sharing the same belief or values of other cultures and ridiculing them for it, third is inferiority of the West, fourth is aggressiveness and acts of violence associated with the clash of the two civilizations, fifth is having ideologies that are used to promote political and military interest, sixth is Western critiques of the religion, seventh is advancing in discriminatory practices and rejecting Muslims as a whole, and eighth is the normalization of aggression towards the Muslim community. Western countries see it as a direct threat and a rejection of democratic values by seeing headscarves, mosques, amongst other things. In attempt to “civilize” Muslims, Islamic signs are generally not accepted by the general public. Instead they are modified to fit Western political structures. Outrages gestures such as the French placing a ban on face covering took place on April 11, 2011. “Under a decree by the French prime minister, Fran?§ois Fillon,women are banned from wearing the niqab in any public place. Under the first ban of its kind in Europe, face veils are outlawed virtually anywhere outside women’s homes, except when worshipping in a religious place or travelling as a passenger in a car” (The Guardian). To justify this outrageous ban arguments stated that it was a security risk. It was also stated that it is sexist, and that Muslims who continue this practice should be forced to assimilate traditional French social norms.

The question asked by most is why we should trust Muslims after all the terrorist attacks that have occurred. The most infamous attack was the terroristic attack on September, 11, also known as 9/11. This attack marked a turning point in world history which started the infamous ‘War on Terror’. The September eleventh attacks are estimated to have killed 3000 people making it the deadliest terrorist incident in human history. The War on Terror led to the invasion of Afghanistan in 2001 and Iraq in 2003. It reveals that terrorism attacks before 9/11 were mainly focused in Latin America and Asia, but later shifted to the Middle East after September, eleventh. Even though this was one of the most deadly attacks in history this still should not affect the Muslim religion as a whole. The heightened rhetoric has exposed an alarming trend that has developed since 9/11. Muslims are constantly and unfailingly cast as somehow un-American because of their faith. The 9/11 attacks which were carried out by 19 Islamic extremists have without a doubt changed how Muslim-Americans are perceived in this country, and those feelings have festered for over fifteen years now. Islamophobes have exploited these extremist acts to project a particular image of all Muslims as extremist and Islam as the source of violence. The same type of violence and terroristic attacks done by Christians, Jews, or any other religion does not have the same backlash against it as it does for terrorism by Muslims. When you hear about attacks done by Christians or Jews the media and general public does not hold accountability on all of the religions followers but do so when it comes to Muslims. You can clearly observe this double standard in media coverage.

Unfortunately, Islamophobes imply that Muslims and followers of Islam are the main source of terrorism. In recent studies it has shown how Americans have become more open to the religion but, despite these changes in views on Muslims and Islam, there are clear indications that many Americans have reservations about the role of Islam in society. For example, aJanuary 2016 Pew Research Center surveyfound that one-quarter of U.S. adults (25%) think half or more of Muslims in the U.S. are “anti-American,” while an additional 24% say they think “some” Muslims are anti-American. I’m providing these statistics, facts, historical and literal analogies,to prove how Americans along with other Western countries view the Islamic culture. The U.S. acknowledged more than 160 Muslim-American terrorist suspects and perpetrators in the decade since 9/11, just a percentage of the thousands of acts of violence that transpire in the United States each year. It is from this overall collection of violence that “an efficient system of government prosecution and media coverage brings Muslim-American terrorism suspects to national attention, creating the impression – perhaps unintentionally – that Muslim-American terrorism is more prevalent than it really is” (Gallup). But, it is not taken into consideration that the Muslim-American community have facilitated security and law enforcement officials to prevent nearly two of every five al Qaeda terrorist plots threatening the United Statesand that tips from the Muslim-American community are the largest single source of initial information to authorities about these few plots.

The impact of Islamophobia should be considered a serious matter. Assaults are not the only form of hate crimes carried out against Muslims. One can identify Anti-Muslim hate crimes because of the unique characteristics that differ from other types of hate crimes. These hate crimes often target people or property associated, or perceived to be associated with Muslims. To identify hate crimes you can ask yourself these questions. Do the victims perceive the matter as bias towards Islam, were there comments or graffiti that indicate signs of being bias, Was the target a place of religious or of cultural significance, what was the nature of the attack against property, was an object perceived to be offensive to Muslims, such as pork flesh or blood, left at the scene, or was a religiously important item, such as a copy of the Koran, desecrated? If you answered yes to any of these questions then more than likely it was a hate crime.” Anti-Muslim intimidation also increased in 2016, with 144 reported victims, compared with 120 the previous year. These numbers, however, are still dwarfed by the 296 victims of anti-Muslim intimidation in 2001″ (pewresearch). After an anti-Muslim campaign has happened or an attack done by Muslim extremists, there is usually an increase in physical assaults, hate crimes, harassment, feelings of exclusion, suspension about loyalty, and discrimination.

This information shows how rather than becoming educated about the religion one chooses to stay ignorant upon the topic. There have been 140,000 terror attacks committed worldwidesince 1970. Even if Muslims were to carry out all of these assaults those terrorists would represent less than 0.00009 percent of all Muslims. 94% of terrorist attacks carried out in the United States from 1980 to 2005 have been by non-Muslims. This means that an American terrorist suspect is over nine times more likely to be a non-Muslim than a Muslim. If the attacker had been Jewish or any other religion the religion as a whole would not want to be labeled as a terroristic threat to the population. Therefore these exact reasons we cannot blame the entire religion of Judaism or Christianity for the violent actions of those carrying out crimes under the names of these religions.

Becoming educated about the religion is the best way to keep from being ignorant. Instead of turning a blind eye to the situation one can become more educated upon the religion and the impacts. It is best to use the knowledge gained from research to be able to recognize misrepresentations of the religion. You should also encourage your peers to become more educated through online resources and books. If you are around someone who is being blatantly ignorant and making bigoted statements you should make it your business to speak up upon the topic. Also, while countering Islamophobia you should be honest and objective. You should inquire where the individual making statements is getting their information from and if it is a reliable source. Be sure to not deny or “whitewash” negative aspects and be able to distinguish between legitimate criticism and being down right prejudice. The people of Islam are regular people just like the rest of us. It would be resourceful to get to know the Muslims within your community and be friendly towards them. Even if you feel hesitant at first which you shouldn’t- they will eventually warm up to you and build a bond with you over time. The United States of America was built on religious freedom so, together we should reject any form of prejudices and bigotry to create a world based on having mutual respect and understanding of one another.

Islamophobia and the Media

Islamophobia: a Rising Ideology Around the World

Islamophobia in American Media, Cause or Result?

The Reality of Islamic Terrorism

Re-evaluating Stereotypes: all Muslims are Terrorists