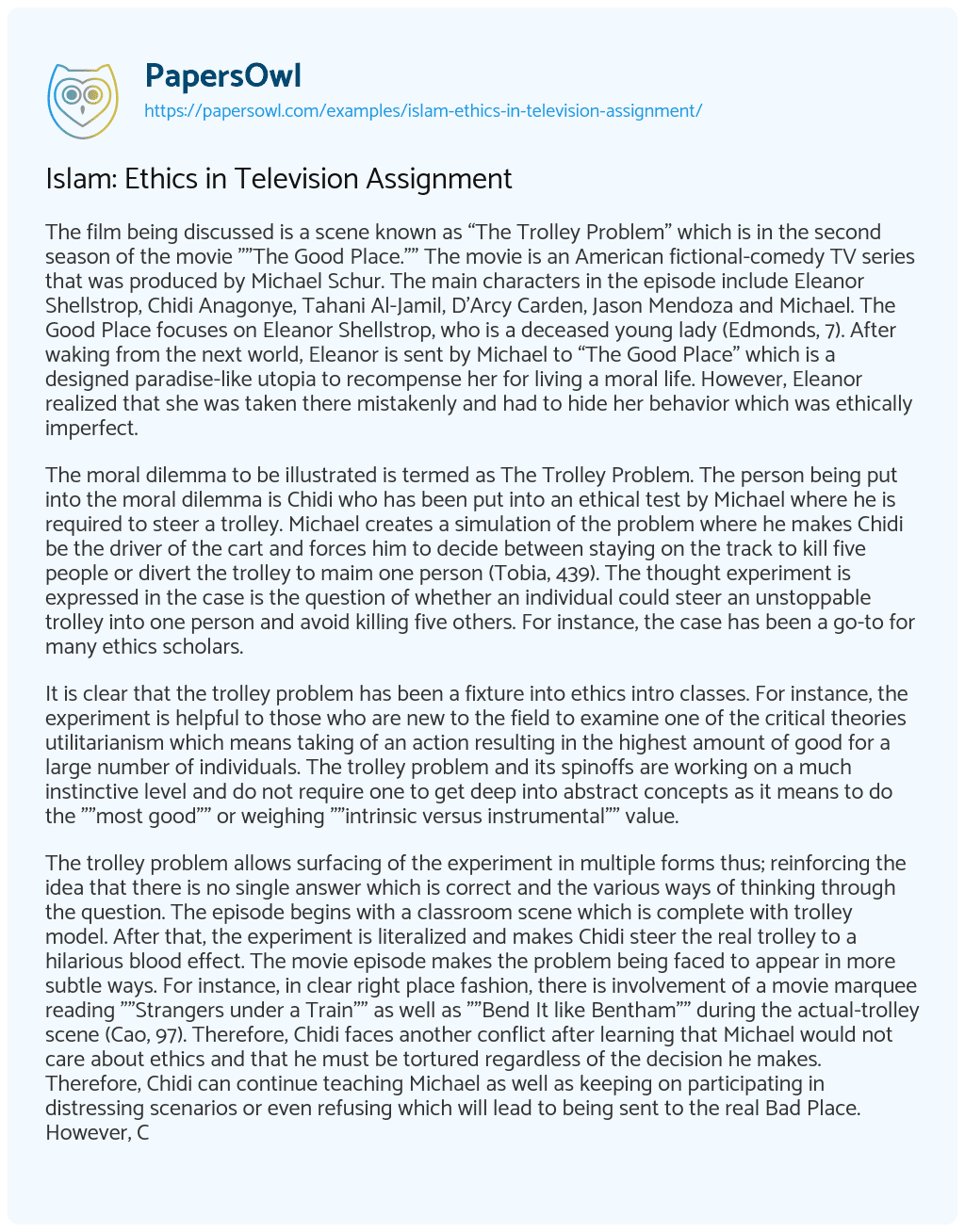 The film being discussed is a scene known as “The Trolley Problem” which is in the second season of the movie “”The Good Place.”” The movie is an American fictional-comedy TV series that was produced by Michael Schur. The main characters in the episode include Eleanor Shellstrop, Chidi Anagonye, Tahani Al-Jamil, D’Arcy Carden, Jason Mendoza and Michael. The Good Place focuses on Eleanor Shellstrop, who is a deceased young lady (Edmonds, 7). After waking from the next world, Eleanor is sent by Michael to “The Good Place” which is a designed paradise-like utopia to recompense her for living a moral life. However, Eleanor realized that she was taken there mistakenly and had to hide her behavior which was ethically imperfect.

The moral dilemma to be illustrated is termed as The Trolley Problem. The person being put into the moral dilemma is Chidi who has been put into an ethical test by Michael where he is required to steer a trolley. Michael creates a simulation of the problem where he makes Chidi be the driver of the cart and forces him to decide between staying on the track to kill five people or divert the trolley to maim one person (Tobia, 439). The thought experiment is expressed in the case is the question of whether an individual could steer an unstoppable trolley into one person and avoid killing five others. For instance, the case has been a go-to for many ethics scholars.

It is clear that the trolley problem has been a fixture into ethics intro classes. For instance, the experiment is helpful to those who are new to the field to examine one of the critical theories utilitarianism which means taking of an action resulting in the highest amount of good for a large number of individuals. The trolley problem and its spinoffs are working on a much instinctive level and do not require one to get deep into abstract concepts as it means to do the “”most good”” or weighing “”intrinsic versus instrumental”” value.

The trolley problem allows surfacing of the experiment in multiple forms thus; reinforcing the idea that there is no single answer which is correct and the various ways of thinking through the question. The episode begins with a classroom scene which is complete with trolley model. After that, the experiment is literalized and makes Chidi steer the real trolley to a hilarious blood effect. The movie episode makes the problem being faced to appear in more subtle ways. For instance, in clear right place fashion, there is involvement of a movie marquee reading “”Strangers under a Train”” as well as “”Bend It like Bentham”” during the actual-trolley scene (Cao, 97). Therefore, Chidi faces another conflict after learning that Michael would not care about ethics and that he must be tortured regardless of the decision he makes. Therefore, Chidi can continue teaching Michael as well as keeping on participating in distressing scenarios or even refusing which will lead to being sent to the real Bad Place. However, Chidi chooses to suffer at Michael’s hand instead of selecting the Bad Place meaning that there is no taking action and pulling the metaphorical trolley lever.

From the episode, Chidi’s dilemma regarding Eleanor is framed as a choice between utilitarianism and Kantianism ethics. From the utilitarianism perspective, Chidi has to expose Eleanor for the saving of the suburb from chaos. Nevertheless, Kant’s reasoning starts from the principle that the only absolute good is the goodwill (Kahane, 432). Thus, an ethical action has to be derived from goodwill meaning that we are obligated to acting in an exemplary way without treating people as a means to an end despite the outcome. Utilitarianism asserts that it would be better to steer the track towards the one person. For instance, classical utilitarianism accords the decision of killing one person rather than five to be not only permissible but morally the best option. The alternative viewpoint is that because moral wrongs already exist in the situation. Thus, moving into another track creates participation in the moral wrong which makes someone partially answerable for the act of killing when otherwise nobody would have been responsible. Besides, an opponent of action might also point to the human lives incommensurability. Therefore, under various moral obligation interpretations, the simplicity of being present in the situation together with the ability to influence the outcome forms the obligation of participation. Then considering the trolley problem the decision to do nothing is regarded as an immoral act if there is more value for five lives than the other one.

For instance, the Kantian approach rejects the utilitarian view of reducing people to numbers in a happiness equation meaning that it would be wrong for Chidi to abandon Eleanor. Therefore, Chidi’s act can be termed to be Kantianism. The assertion can be made that since Chidi was forced to do something of which he was not sure of if it is okay to do, he just asked himself and followed what the world would look like if everyone does that (Kamm, 21). Therefore, if everyone is doing the act but for the result, the action does not make sense or serve any purpose in that context then the deed would not be morally permissible. According to Chidi, “”If all that matters is the total of goodness, then you can justify any number of bad actions.””

In the case of the trolley problem and considering that Chidi chose to sacrifice the one person and save five, it can be denoted that Kantianism theory fails. The reason for the failure is because morals and even from worldly view there would be consideration of numbers rather than other factors. The Kantianism theory aims at saving people while still considering more than numbers. Kantianism is more of being human while utilitarianism is all about pure numbers.

One of the criticisms of the trolley problem is the removal of reality from choice making ass well as the abstraction of one’s moral decision making. For instance, various researchers as it is evidenced in a 2014 paper that was published in the Social and Personality Psychology Compass have criticized the use of trolley problem with claims that the presented scenario is too unconnected and extreme for usefulness in real-life moral situations or educational purposes (Kihlstrom, 12). Critics have the opinion that making cold calculations concerning hypothetical situations where every alternative result into one or more gruesome deaths is encouraging a thinking type which is devoid of human empathy as well as assuming a mandate of deciding the one to die or live.

Despite the fantastic settings, The Good Place gives some sense of reality and indicates how the field of moral philosophy which is sometimes dry uses quirky scenarios that even recall melodrama. Thus, the right place is a funny, surprising and engaging accessible introduction to moral philosophy since it incorporates the trolley problem together with other dilemmas in the plot.

Edmonds, David. Would you kill the fat man?: The trolley problem and what your answer tells us about right and wrong. Princeton University Press, 2013.

The Ethics of Animal Experimentation