Is Veganism Detrimental to One’s Health 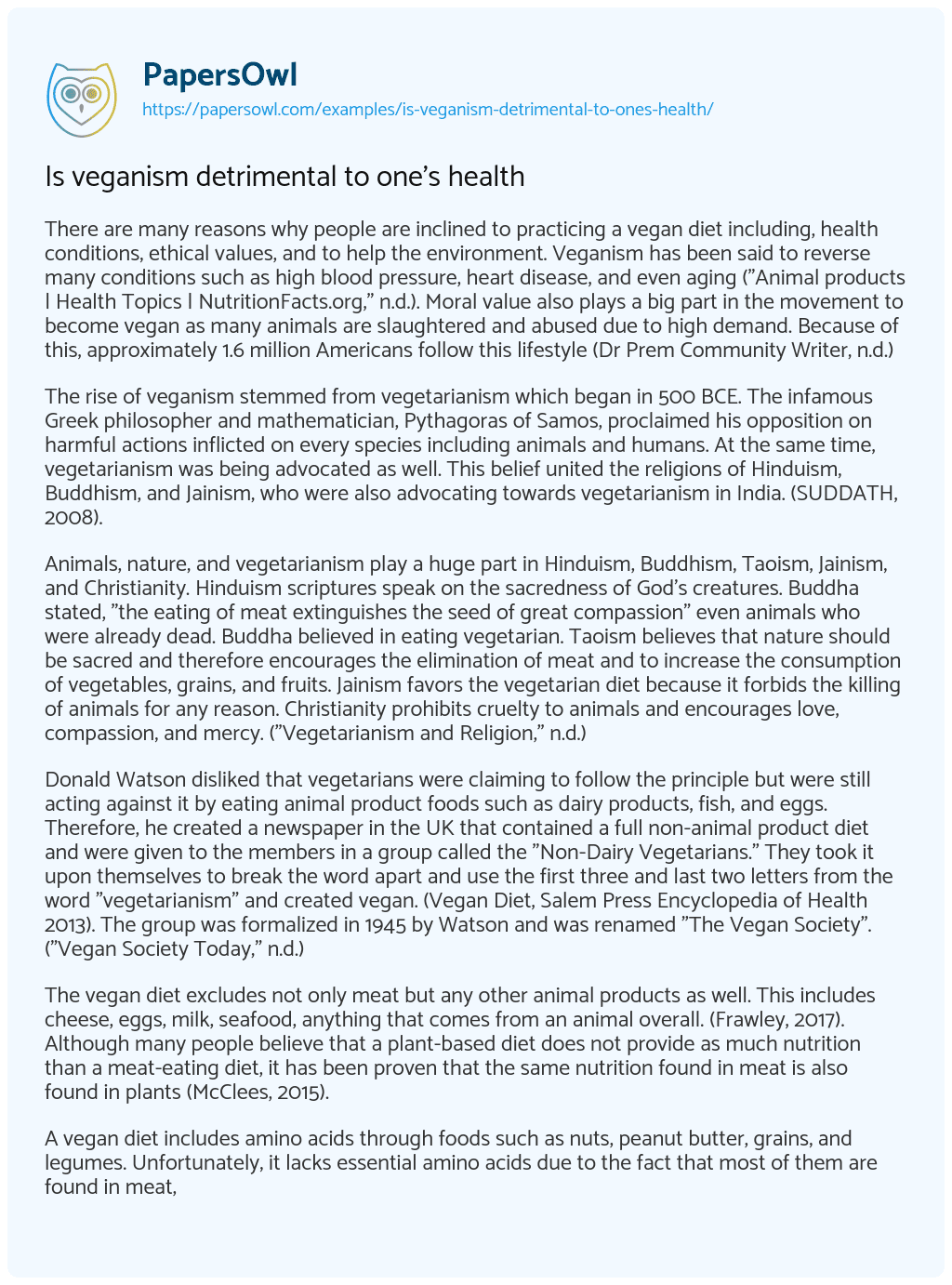 There are many reasons why people are inclined to practicing a vegan diet including, health conditions, ethical values, and to help the environment. Veganism has been said to reverse many conditions such as high blood pressure, heart disease, and even aging (“Animal products | Health Topics | NutritionFacts.org,” n.d.). Moral value also plays a big part in the movement to become vegan as many animals are slaughtered and abused due to high demand. Because of this, approximately 1.6 million Americans follow this lifestyle (Dr Prem Community Writer, n.d.)

The rise of veganism stemmed from vegetarianism which began in 500 BCE. The infamous Greek philosopher and mathematician, Pythagoras of Samos, proclaimed his opposition on harmful actions inflicted on every species including animals and humans. At the same time, vegetarianism was being advocated as well. This belief united the religions of Hinduism, Buddhism, and Jainism, who were also advocating towards vegetarianism in India. (SUDDATH, 2008).

Animals, nature, and vegetarianism play a huge part in Hinduism, Buddhism, Taoism, Jainism, and Christianity. Hinduism scriptures speak on the sacredness of God’s creatures. Buddha stated, “the eating of meat extinguishes the seed of great compassion” even animals who were already dead. Buddha believed in eating vegetarian. Taoism believes that nature should be sacred and therefore encourages the elimination of meat and to increase the consumption of vegetables, grains, and fruits. Jainism favors the vegetarian diet because it forbids the killing of animals for any reason. Christianity prohibits cruelty to animals and encourages love, compassion, and mercy. (“Vegetarianism and Religion,” n.d.)

Donald Watson disliked that vegetarians were claiming to follow the principle but were still acting against it by eating animal product foods such as dairy products, fish, and eggs. Therefore, he created a newspaper in the UK that contained a full non-animal product diet and were given to the members in a group called the “Non-Dairy Vegetarians.” They took it upon themselves to break the word apart and use the first three and last two letters from the word “vegetarianism” and created vegan. (Vegan Diet, Salem Press Encyclopedia of Health 2013). The group was formalized in 1945 by Watson and was renamed “The Vegan Society”. (“Vegan Society Today,” n.d.)

The vegan diet excludes not only meat but any other animal products as well. This includes cheese, eggs, milk, seafood, anything that comes from an animal overall. (Frawley, 2017). Although many people believe that a plant-based diet does not provide as much nutrition than a meat-eating diet, it has been proven that the same nutrition found in meat is also found in plants (McClees, 2015).

A vegan diet includes amino acids through foods such as nuts, peanut butter, grains, and legumes. Unfortunately, it lacks essential amino acids due to the fact that most of them are found in meat, poultry, and fish (“Essentials for a Vegan’s Protein & Amino Acids,” 2012). A vegan diet also contains lower levels of saturated fats and omega 3-fatty acids. It limits the amount of lipid soluble vitamins such as vitamin D, minerals such as calcium, zinc, and B12. On the other hand, vegan eaters do receive their glucose needs through fruits, vegetables, whole grains, and beans. They also receive water-soluble vitamins such as vitamin C through fruits such as oranges and folic acid through vegetables such as broccoli. Lipid-soluble vitamin can be attained through foods containing vitamin E such as almonds and wheat germ oil. Eating vegan provides high fiber in nuts and in fruits including bananas and carrots (Gunnars, BSc, 2018). Vegans, fortunately, do not lose out on magnesium and iron when eating plant-based foods (Frawley, 2017). They intake tons of iron from avocados and oatmeal for example (MacCormick, 2017). Meals containing potatoes supply antioxidants for vegans. A vegan’s diet is said to be cholesterol free since most of the cholesterol comes from meat products. However, it is not necessary for vegan eaters to worry about that because the body naturally makes the cholesterol from all other foods that they intake. According to Diagnosis Diet, “studies suggest that vegan diets can lower cholesterol levels by between 10 and 35 percent”. For all these reasons, consumers do not typically hesitate to transition to the vegan lifestyle.

A vegan person would most likely start off with a “power bowl” for breakfast. Breakfast is an extremely important time to get most of the nutrients to start your day off right. Power bowls include bowls of packed fruits such as bananas, strawberries, blueberries, etc. Combined with oatmeal, nuts, sweeteners such as maple syrup, agave, goji berries, cacao nibs, etc. Around lunchtime, vegans can make interesting soups, salads, and sandwiches such as spinach provolone grilled cheese. The creativity begins during dinner time as there are so many options to choose from. Beans, corn, quinoa, and spinach are usually the main pieces to a filling dinner. With all vegetables and spices combined, options include; stuffed peppers, zucchini boats, spinach lasagna, buddha bowls, etc. Besides breakfast, lunch, and dinner, vegans do snack multiple times during the day. Snacks include; nuts, trail mix, dried fruit, energy balls, granola, etc. Apart from frequently making their own peanut butter, ice cream, dressings, and pesto there are many vegan alternatives. Many brands make vegan options available in grocery stores, brands include Daiya, Earth Balance, and Good Planet Foods. (“Vegan Food Brands from Vegan Flourish,” n.d.).

Geriatric patients should be mindful of calcium intake due to their fragile bones, these patients should be adding vegetables high in calcium such as okra, soybeans, broccoli, collard greens, kale, etc. (Mangels, Ph.D, RD, 2018). Since the diet is deficient in providing a high amount of an essential vitamin, B12, vegan eaters are highly recommended to take B12 vitamin supplements. By eating sauerkraut, vegans can intake their probiotic needs (Ginta, 2017).

Fortunately, a vegan diet can be very beneficial to an athlete’s high-intensity lifestyle. An epitome of that would be Serena Williams, a professional, competitive tennis player who follows a vegan diet. Other celebrities that are vegan would be Ariana Grande, Jessica Simpson, and Liam Hemsworth just to name a few (Glamour, 2018).

Ultimately, the agriculture industry is most beneficial from the vegan diet because of how much plants, vegetables and crops in general that the diet promotes. Companies can see a promising future as consumers buy groceries based on their plant-based diet (Frawley, 2017).

Although vegan alternatives can be a bit pricey, the diet is practical for a modern lifestyle due to the affordable expenses. Consumers have options of preparing meal plans, buying online, growing their own products, and visiting a local farmers market for example (Oliveria, 2015).

In my opinion, practicing a vegan diet has more pros than cons to it. Reason being that it is based around a variety of healthy foods that can still provide the important nutrients and vitamins that a person not following a vegan diet still receives. One day, I would like to attempt to transition into the vegan diet and observe how it would personally affect my health. I have gained important knowledge of this diet through research and as well as first hand through close relatives of mine. My cousin began transitioning into a vegan diet at the beginning of this year and has seen major differences health wise such as being more energized.

In conclusion, the greatest motivation in a vegan diet is the promotion of a healthy lifestyle and contributions to improving moral values. Vegan/vegetarian diets have said to not only prevent diseases but also to reverse them. Illnesses include type 2 diabetes, rheumatoid arthritis, and Parkinson’s disease (McWilliams, n.d.). A disadvantage to a vegan lifestyle would be that a new plant-based consumer would most likely be overwhelmed with the information they have to learn in order to get the right nutrition. This also may take time for a long-time meat eater to adapt but this can be fixed with a little research and education.

Is veganism detrimental to one's health. (2020, May 10). Retrieved from https://papersowl.com/examples/is-veganism-detrimental-to-ones-health/

A Better Understanding of Veganism

Might a Vegan Diet be Healthy, or Even Healthier?

Why Veganism is not a Healthier Lifestyle

A Look into Veganism and Plant Based Diets