Is the American Dream Accessible to Everyone 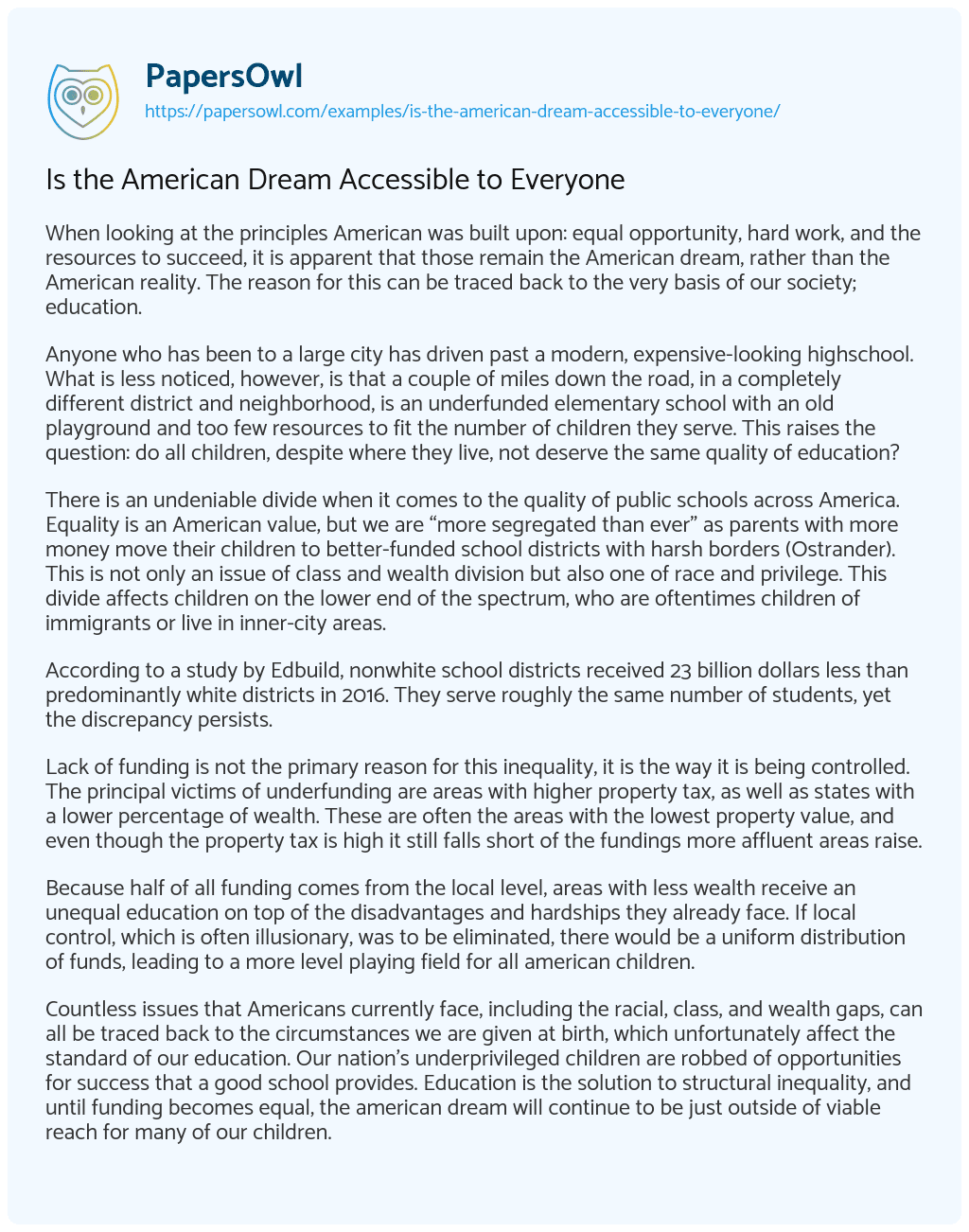 When looking at the principles American was built upon: equal opportunity, hard work, and the resources to succeed, it is apparent that those remain the American dream, rather than the American reality. The reason for this can be traced back to the very basis of our society; education.

Anyone who has been to a large city has driven past a modern, expensive-looking highschool. What is less noticed, however, is that a couple of miles down the road, in a completely different district and neighborhood, is an underfunded elementary school with an old playground and too few resources to fit the number of children they serve. This raises the question: do all children, despite where they live, not deserve the same quality of education?

There is an undeniable divide when it comes to the quality of public schools across America. Equality is an American value, but we are “more segregated than ever” as parents with more money move their children to better-funded school districts with harsh borders (Ostrander). This is not only an issue of class and wealth division but also one of race and privilege. This divide affects children on the lower end of the spectrum, who are oftentimes children of immigrants or live in inner-city areas.

According to a study by Edbuild, nonwhite school districts received 23 billion dollars less than predominantly white districts in 2016. They serve roughly the same number of students, yet the discrepancy persists.

Lack of funding is not the primary reason for this inequality, it is the way it is being controlled. The principal victims of underfunding are areas with higher property tax, as well as states with a lower percentage of wealth. These are often the areas with the lowest property value, and even though the property tax is high it still falls short of the fundings more affluent areas raise.

Because half of all funding comes from the local level, areas with less wealth receive an unequal education on top of the disadvantages and hardships they already face. If local control, which is often illusionary, was to be eliminated, there would be a uniform distribution of funds, leading to a more level playing field for all american children.

Countless issues that Americans currently face, including the racial, class, and wealth gaps, can all be traced back to the circumstances we are given at birth, which unfortunately affect the standard of our education. Our nation’s underprivileged children are robbed of opportunities for success that a good school provides. Education is the solution to structural inequality, and until funding becomes equal, the american dream will continue to be just outside of viable reach for many of our children.

Is the American Dream Accessible to Everyone. (2021, Jun 16). Retrieved from https://papersowl.com/examples/is-the-american-dream-accessible-to-everyone/

The Crisis and Contradictions of the American Dream

Corruption of the American Dream

The Quest to Achieve the American Dream

The American Dream is Dead

The Illusion of the American Dream