Impact on the Subconscious. how do Television and Films Affect our Lives? 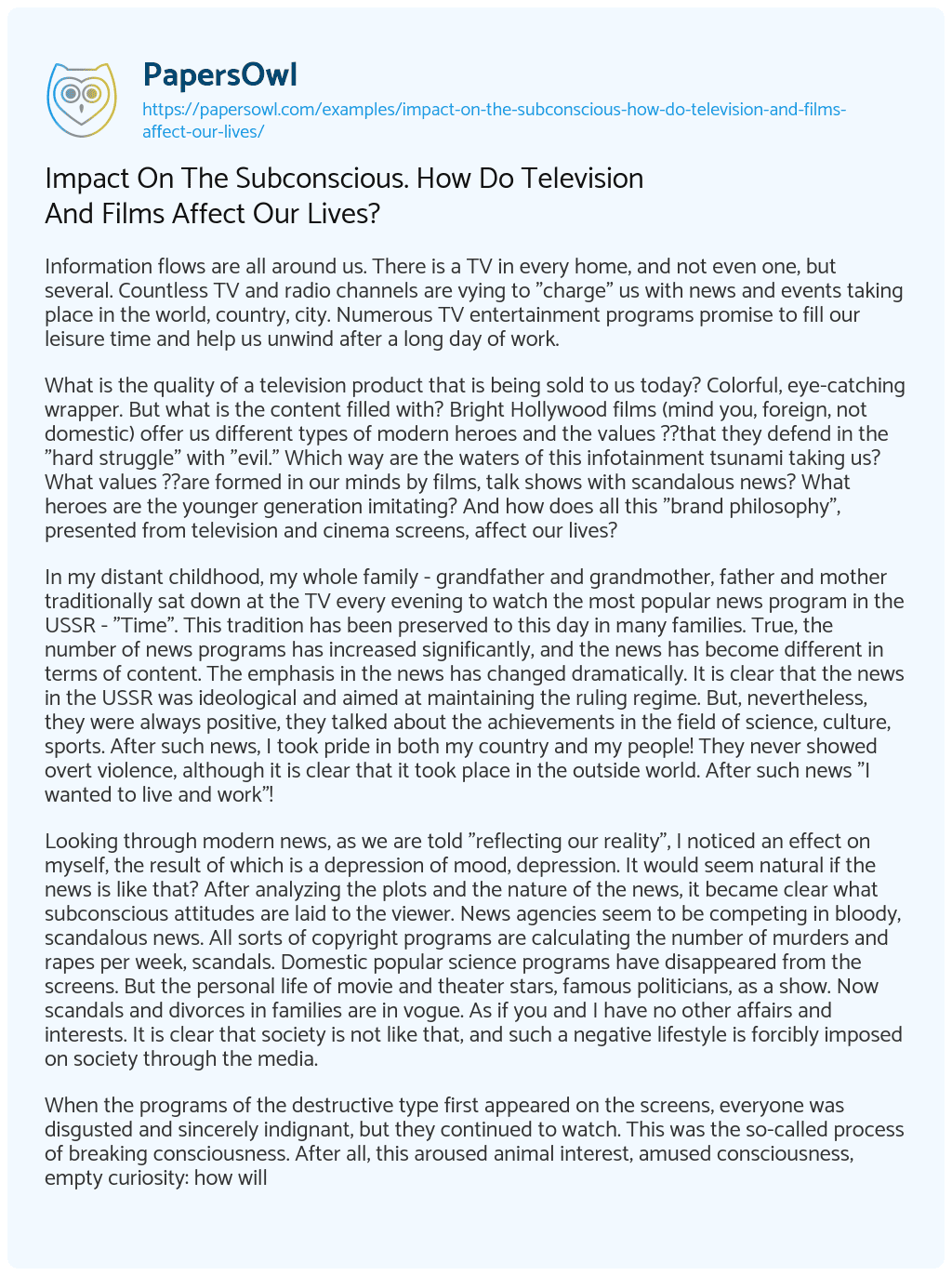 Information flows are all around us. There is a TV in every home, and not even one, but several. Countless TV and radio channels are vying to “charge” us with news and events taking place in the world, country, city. Numerous TV entertainment programs promise to fill our leisure time and help us unwind after a long day of work.

What is the quality of a television product that is being sold to us today? Colorful, eye-catching wrapper. But what is the content filled with? Bright Hollywood films (mind you, foreign, not domestic) offer us different types of modern heroes and the values ??that they defend in the “hard struggle” with “evil.” Which way are the waters of this infotainment tsunami taking us? What values ??are formed in our minds by films, talk shows with scandalous news? What heroes are the younger generation imitating? And how does all this “brand philosophy”, presented from television and cinema screens, affect our lives?

In my distant childhood, my whole family – grandfather and grandmother, father and mother traditionally sat down at the TV every evening to watch the most popular news program in the USSR – “Time”. This tradition has been preserved to this day in many families. True, the number of news programs has increased significantly, and the news has become different in terms of content. The emphasis in the news has changed dramatically. It is clear that the news in the USSR was ideological and aimed at maintaining the ruling regime. But, nevertheless, they were always positive, they talked about the achievements in the field of science, culture, sports. After such news, I took pride in both my country and my people! They never showed overt violence, although it is clear that it took place in the outside world. After such news “I wanted to live and work”!

Looking through modern news, as we are told “reflecting our reality”, I noticed an effect on myself, the result of which is a depression of mood, depression. It would seem natural if the news is like that? After analyzing the plots and the nature of the news, it became clear what subconscious attitudes are laid to the viewer. News agencies seem to be competing in bloody, scandalous news. All sorts of copyright programs are calculating the number of murders and rapes per week, scandals. Domestic popular science programs have disappeared from the screens. But the personal life of movie and theater stars, famous politicians, as a show. Now scandals and divorces in families are in vogue. As if you and I have no other affairs and interests. It is clear that society is not like that, and such a negative lifestyle is forcibly imposed on society through the media.

When the programs of the destructive type first appeared on the screens, everyone was disgusted and sincerely indignant, but they continued to watch. This was the so-called process of breaking consciousness. After all, this aroused animal interest, amused consciousness, empty curiosity: how will the unfolding drama end in the program? And now many people just watch these shows and are no longer indignant. Why? Because appropriate attitudes have already been imposed on watching such programs, dictating a model of behavior to you.

Why don’t people think about the benefits of these views? After all, before our very eyes, many media outlets are creating a degradation of society, weakening the positive attitude, the will of people, undermining moral, cultural and moral values? As a result, all this dirt imperceptibly became the norm of life for us. After all, we will deceive ourselves if we say that these programs do not affect us.

Okay, older people have at least some kind of immunity against the information virus, relying on the experience of those times when films and programs were kind, informative, aimed at the formation of highly moral principles in society, stimulating the intellectual development of the individual and promoting a healthy lifestyle. And then our grandparents are “planted” on endless one-day serials. And the young people were completely left alone with this informational filth, because they have nothing to compare with, they have no other experience! They copy everything that TV programs offer them with valiant enthusiasm.

I would especially like to note the negative impact on human consciousness of some Western films aimed at promoting consumer attitudes in society. Such films cannot even be called cultural elements. This is a poison that is poured into the minds of young people under anesthesia as attitudes of norms of behavior. The process of formation and recording of the necessary information in the subconscious of people is as follows. Cinema itself in this capacity, as an entertainment product, implies rest and relaxation. People are not particularly tuned into the analysis of the plot, the character of the characters, their style of behavior, and their correspondence to historical events. And through the optic nerve they perceive information that goes directly to the subconscious, bypassing the analysis process.

At the moment of an emotional outburst, they receive attitudes towards norms of behavior. But what are these “norms”? Action heroes in the film’s plot leave behind mountains of corpses and countless beauties with whom they slept. This lays in the subconscious the same behavioral model in the audience. It is clear that not everyone will immediately grab a weapon and run to kill, but the seed has been planted, and in certain “critical” states of the psyche, a person can subconsciously choose this model of behavior. You all know examples of when teenagers in American schools took up arms and killed their peers and teachers, and then committed suicide. They arranged a bloody western in a peaceful life, just like in action movies! In most feature films promoting murder, no one really shows how the killer’s psyche actually changes, how his conscience torments him, and what his life eventually turns into.

Most modern Western films invest in the subconscious of people that the most important thing in life is money and consumer attitudes in society! Destructive attitudes are invested: we live once, take everything from life, nothing is important except money, pleasure can only be obtained from sex, love and relationships are a trifle, education is a trifle, moral values ??are a trifle! And since informational dirt pours from TV, cinema and radio screens, a person is constantly under the pressure of this negativity. After all, look at what the main characters of most Western films are fighting for, with which our viewers are “stuffed”? They are ready for anything for the sake of money: betrayal, murder, robbery. This is embellished with such incentives that, they say, we steal and kill the villains who once robbed it themselves. Immediately I remember the phrase “rob the loot”. But no one says that this method does not make people better and more honest, but turns them into the same villains against whom they fought.

Yes, besides, maybe I will say a banal phrase, but now one of the mainstays of positive and useful information is libraries and some modern books. I understand that it is impossible to give up television and cinema right away. But I think many of you, leaving the city or nature for several days, noticed that it was as if an “invisible cap” was removed from your head, pressing on the brain and depressing the spirit. Engage in self-development, self-knowledge, reading books, sports, learning foreign languages, tourism. After all, we are surrounded by an interesting, multifaceted, unknown world. Much depends on young parents, who must show by their example a good model of behavior in the family and in life. To teach children to order, development, sports. And not leave them alone with Hollywood products. Spiritual improvement of society is a complex process, but it must be started with one person, that is, with each of us. After all, a long way begins with the first step.

Impact On The Subconscious. How Do Television And Films Affect Our Lives?. (2021, Jul 07). Retrieved from https://papersowl.com/examples/impact-on-the-subconscious-how-do-television-and-films-affect-our-lives/

The Impact of Television on Modern Day Society

The Impact of Stress in our Everyday Lives

Comparison between the Studio and Artistic Animated Films

The Effects of Womxn Portrayal in Films