Identity Outside the Vacuum 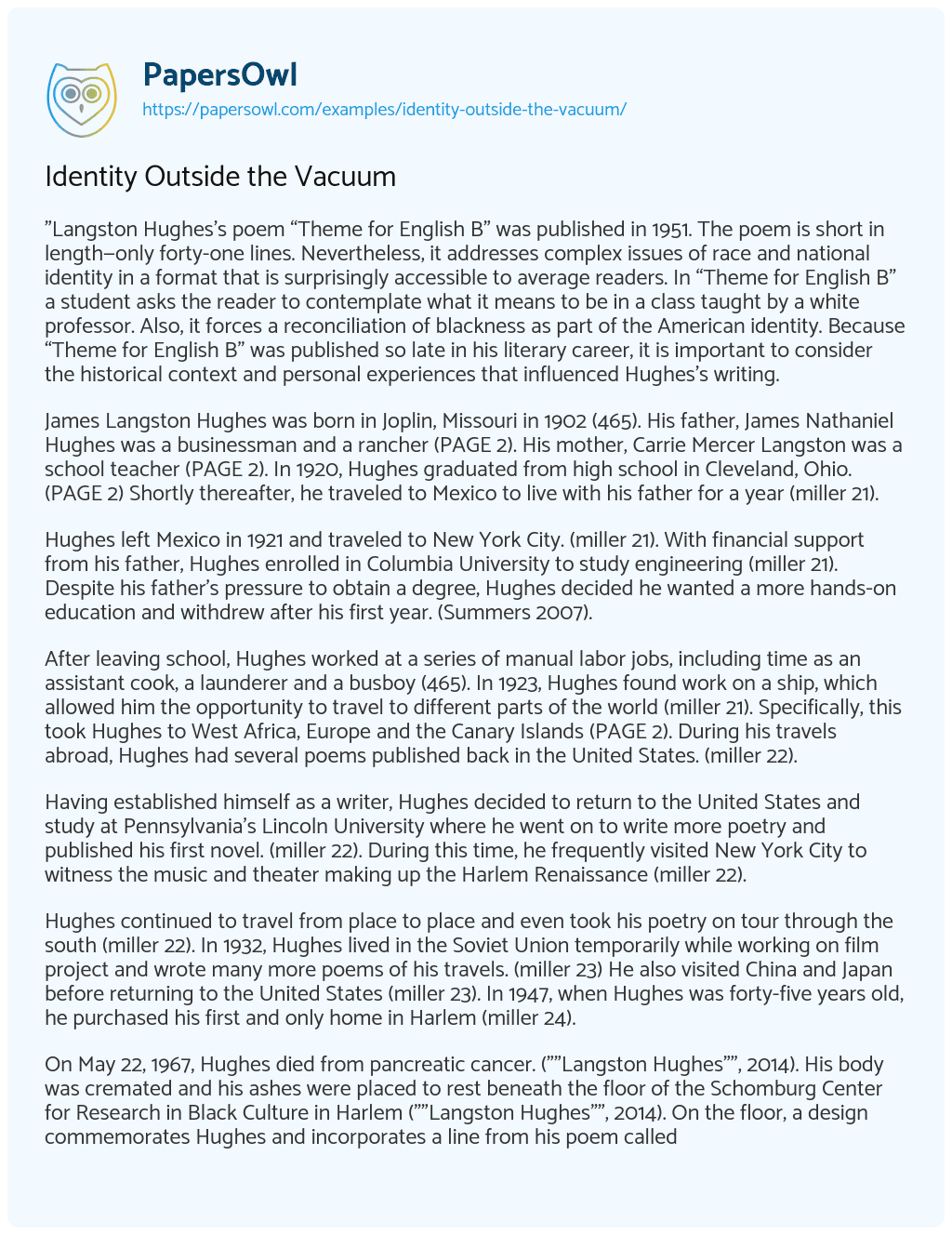 “Langston Hughes’s poem “Theme for English B” was published in 1951. The poem is short in length—only forty-one lines. Nevertheless, it addresses complex issues of race and national identity in a format that is surprisingly accessible to average readers. In “Theme for English B” a student asks the reader to contemplate what it means to be in a class taught by a white professor. Also, it forces a reconciliation of blackness as part of the American identity. Because “Theme for English B” was published so late in his literary career, it is important to consider the historical context and personal experiences that influenced Hughes’s writing.

James Langston Hughes was born in Joplin, Missouri in 1902 (465). His father, James Nathaniel Hughes was a businessman and a rancher (PAGE 2). His mother, Carrie Mercer Langston was a school teacher (PAGE 2). In 1920, Hughes graduated from high school in Cleveland, Ohio. (PAGE 2) Shortly thereafter, he traveled to Mexico to live with his father for a year (miller 21).

Hughes left Mexico in 1921 and traveled to New York City. (miller 21). With financial support from his father, Hughes enrolled in Columbia University to study engineering (miller 21). Despite his father’s pressure to obtain a degree, Hughes decided he wanted a more hands-on education and withdrew after his first year. (Summers 2007).

After leaving school, Hughes worked at a series of manual labor jobs, including time as an assistant cook, a launderer and a busboy (465). In 1923, Hughes found work on a ship, which allowed him the opportunity to travel to different parts of the world (miller 21). Specifically, this took Hughes to West Africa, Europe and the Canary Islands (PAGE 2). During his travels abroad, Hughes had several poems published back in the United States. (miller 22).

Having established himself as a writer, Hughes decided to return to the United States and study at Pennsylvania’s Lincoln University where he went on to write more poetry and published his first novel. (miller 22). During this time, he frequently visited New York City to witness the music and theater making up the Harlem Renaissance (miller 22).

Hughes continued to travel from place to place and even took his poetry on tour through the south (miller 22). In 1932, Hughes lived in the Soviet Union temporarily while working on film project and wrote many more poems of his travels. (miller 23) He also visited China and Japan before returning to the United States (miller 23). In 1947, when Hughes was forty-five years old, he purchased his first and only home in Harlem (miller 24).

Baxter Miller summarized it best when he wrote that Hughes “. . . established himself as a citizen of the world, a creator of many genres of literature, and an artist who success extended far beyond the Harlem Renaissance” (miller 25). Looking back at Hughes’s life, it is clear that all of his travels and experiences had a profound influence on his writing. There is no doubt that the cultures and lifestyles Hughes encountered in his travels served to enrich his language and prose, and also to inform his experience with race and national identity.”

Identity Outside the Vacuum. (2021, Apr 08). Retrieved from https://papersowl.com/examples/identity-outside-the-vacuum/

Theme for English B