I Want to be Psychologist in the Future 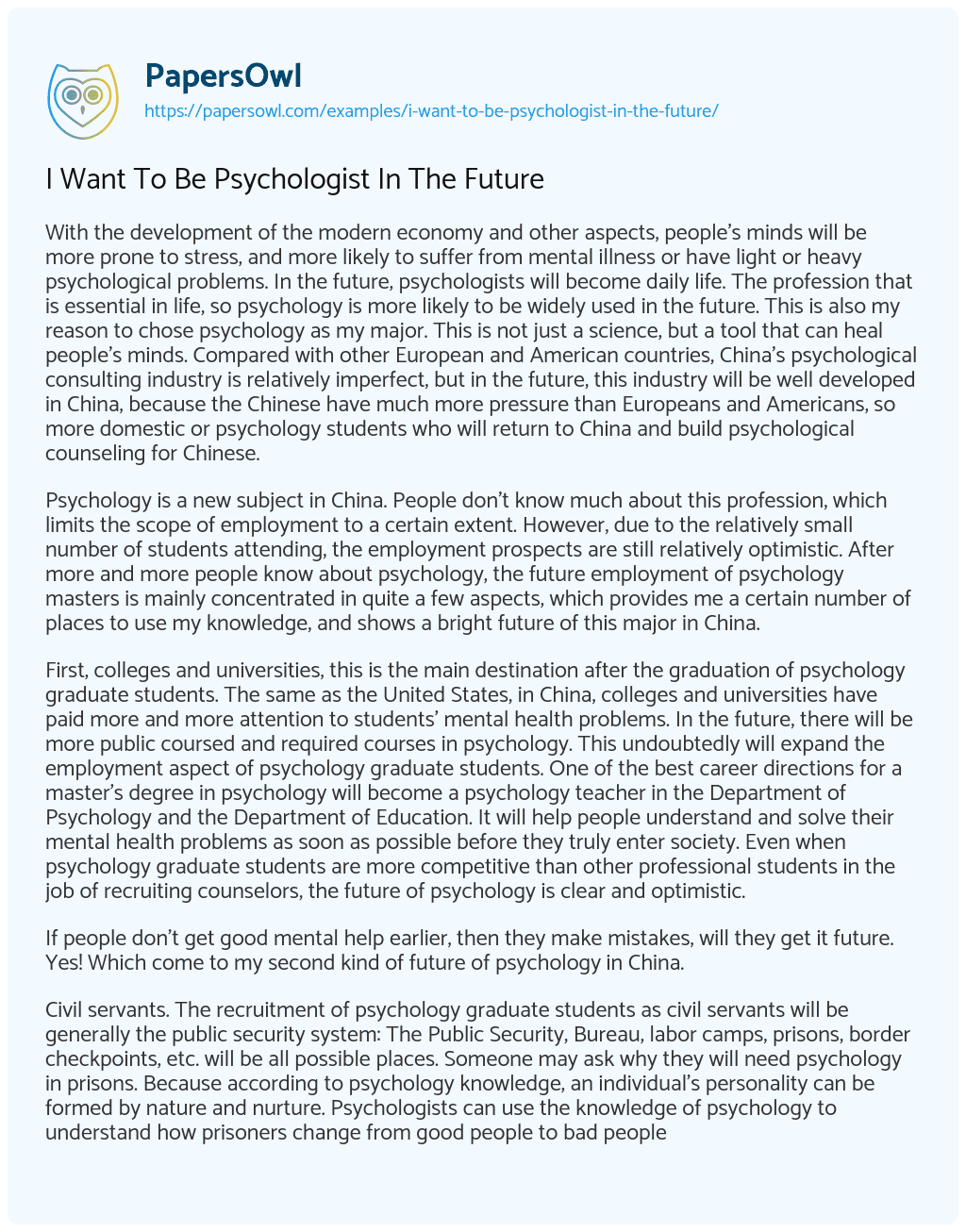 With the development of the modern economy and other aspects, people’s minds will be more prone to stress, and more likely to suffer from mental illness or have light or heavy psychological problems. In the future, psychologists will become daily life. The profession that is essential in life, so psychology is more likely to be widely used in the future. This is also my reason to chose psychology as my major. This is not just a science, but a tool that can heal people’s minds. Compared with other European and American countries, China’s psychological consulting industry is relatively imperfect, but in the future, this industry will be well developed in China, because the Chinese have much more pressure than Europeans and Americans, so more domestic or psychology students who will return to China and build psychological counseling for Chinese.

Psychology is a new subject in China. People don’t know much about this profession, which limits the scope of employment to a certain extent. However, due to the relatively small number of students attending, the employment prospects are still relatively optimistic. After more and more people know about psychology, the future employment of psychology masters is mainly concentrated in quite a few aspects, which provides me a certain number of places to use my knowledge, and shows a bright future of this major in China.

If people don’t get good mental help earlier, then they make mistakes, will they get it future. Yes! Which come to my second kind of future of psychology in China.

Civil servants. The recruitment of psychology graduate students as civil servants will be generally the public security system: The Public Security, Bureau, labor camps, prisons, border checkpoints, etc. will be all possible places. Someone may ask why they will need psychology in prisons. Because according to psychology knowledge, an individual’s personality can be formed by nature and nurture. Psychologists can use the knowledge of psychology to understand how prisoners change from good people to bad people step by step and will also help them to understand the impact of the psychological activity. There will be schools in prisons for prisoners to learn psychology, if they do it well, they will have a chance to reduce the penalty. When they understand the meaning of nature vs. nurture, they will find their confidence and positive power back. After the release, they will not always count them as a bad person, they will have the motivation to change and help others who will or are thinking about committing a crime. There is a famous slang in Chinese, “Man on Earth, Good at Birth” (Mencius, Three Character Canon / San Tzu Ching). Punishment is required, and education will also be essential for them to reform evils.

Can Psychology link with other majors in the future? But not always live as a mysterious and lonely subject? Yes! Let’s work together with business. “Knowing ourselves and knowing each other will help us to win each competition” (Sun-Tzu, The Art of War, Plan of Attack Articles). Business is another version of the competition. And the way using psychology will be an essential part of a competition. Which come to my third kind of future of psychology in China.

HR, Human Resources Management. It is a subject that is planned in the business department. However, it is about human resources, so it will need psychology’s help. Psychology students advocate humanized management and complement human resources, management students. According to the article on The Balance Careers, HR has an internal element – quality management. Mainly refers to the use of modern scientific methods to effectively manage people’s thoughts and behavior (including the coordination, control, and management of individual and group thinking), giving full play to people’s subjective initiative to achieve Organizational goals (Heathfield, 2018). Psychological knowledge will be the “modern scientific method” in the future and will be the only one because psychology is the tool to understand people’s thoughts and behavior. My older sister’s friend is an HR, she said it was hard sometimes that she needed to learn employers’ behavior which links with their working ability or working area. In the future, this problem will be solved because of the inevitable development of Psychology in China.

I Want To Be Psychologist In The Future. (2021, Jun 27). Retrieved from https://papersowl.com/examples/i-want-to-be-psychologist-in-the-future/

MY DREAM JOB is be a Psychologist

The Popularity of Fast Food Festaurants in China