Hypocricy in Hawthorne’s and O’Connor’s Stories 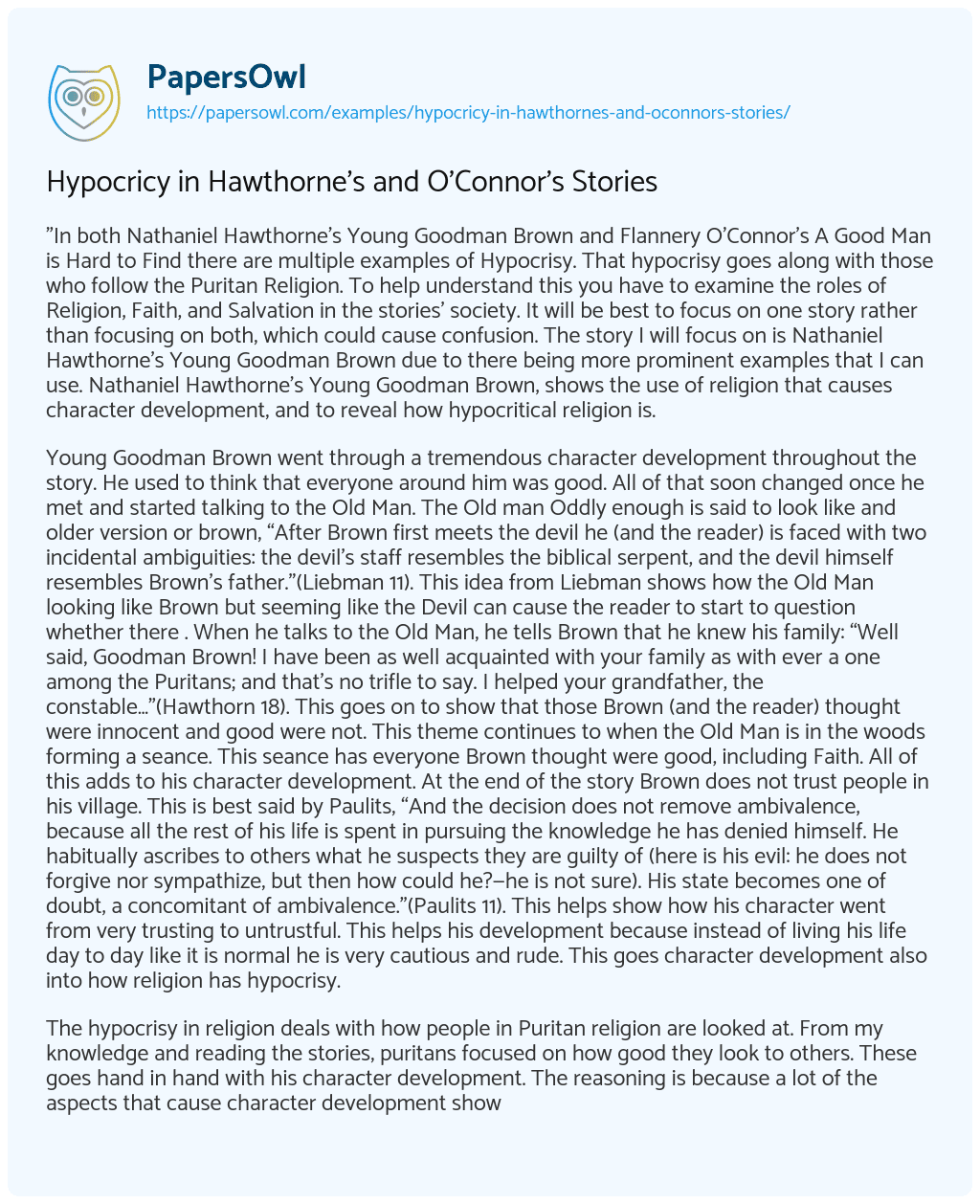 Young Goodman Brown went through a tremendous character development throughout the story. He used to think that everyone around him was good. All of that soon changed once he met and started talking to the Old Man. The Old man Oddly enough is said to look like and older version or brown, “After Brown first meets the devil he (and the reader) is faced with two incidental ambiguities: the devil’s staff resembles the biblical serpent, and the devil himself resembles Brown’s father.”(Liebman 11). This idea from Liebman shows how the Old Man looking like Brown but seeming like the Devil can cause the reader to start to question whether there . When he talks to the Old Man, he tells Brown that he knew his family: “Well said, Goodman Brown! I have been as well acquainted with your family as with ever a one among the Puritans; and that’s no trifle to say. I helped your grandfather, the constable…”(Hawthorn 18). This goes on to show that those Brown (and the reader) thought were innocent and good were not. This theme continues to when the Old Man is in the woods forming a seance. This seance has everyone Brown thought were good, including Faith. All of this adds to his character development. At the end of the story Brown does not trust people in his village. This is best said by Paulits, “And the decision does not remove ambivalence, because all the rest of his life is spent in pursuing the knowledge he has denied himself. He habitually ascribes to others what he suspects they are guilty of (here is his evil: he does not forgive nor sympathize, but then how could he?—he is not sure). His state becomes one of doubt, a concomitant of ambivalence.”(Paulits 11). This helps show how his character went from very trusting to untrustful. This helps his development because instead of living his life day to day like it is normal he is very cautious and rude. This goes character development also into how religion has hypocrisy.

The hypocrisy in religion deals with how people in Puritan religion are looked at. From my knowledge and reading the stories, puritans focused on how good they look to others. These goes hand in hand with his character development. The reasoning is because a lot of the aspects that cause character development show hypocrisy in religion. Paultis helps my point by saying, “Hawthorne, after detailing an unavailing conversation in which the Devil uses an “everybody-has-done-it” argument, constructs a major tripartite segment which has affinities with the biblical account of the triple temptation of Christ in the desert.”(Paultis 4). This goes with how everyone who is shown as religious has made secret deals with the Devil himself. My final example is at the end of the story when they are having the seance. When he saw who was at the seance it was people of high honor: “…he recognized a score of the church-members of Salem village, famous for their especial sanctity. Good old Deacon Gookin had arrived, and waited at the skirts of that venerable saint, his reverend pastor. But, irreverently consorting with these grave, reputable, and pious people, these elders of the church, these chaste dames and dewy virgins, there were men of dissolute lives and women of spotted fame…”(Hawthorne 56). This overall helps the point of hypocrisy in religion because of the evils that are kept secret. Those who kept the evils secret are the ones who are highly considered in their society.

Hypocricy in Hawthorne's and O’Connor's Stories. (2021, Jun 05). Retrieved from https://papersowl.com/examples/hypocricy-in-hawthornes-and-oconnors-stories/

The Stories of Flannery O’Connor and Nathaniel Hawthorne