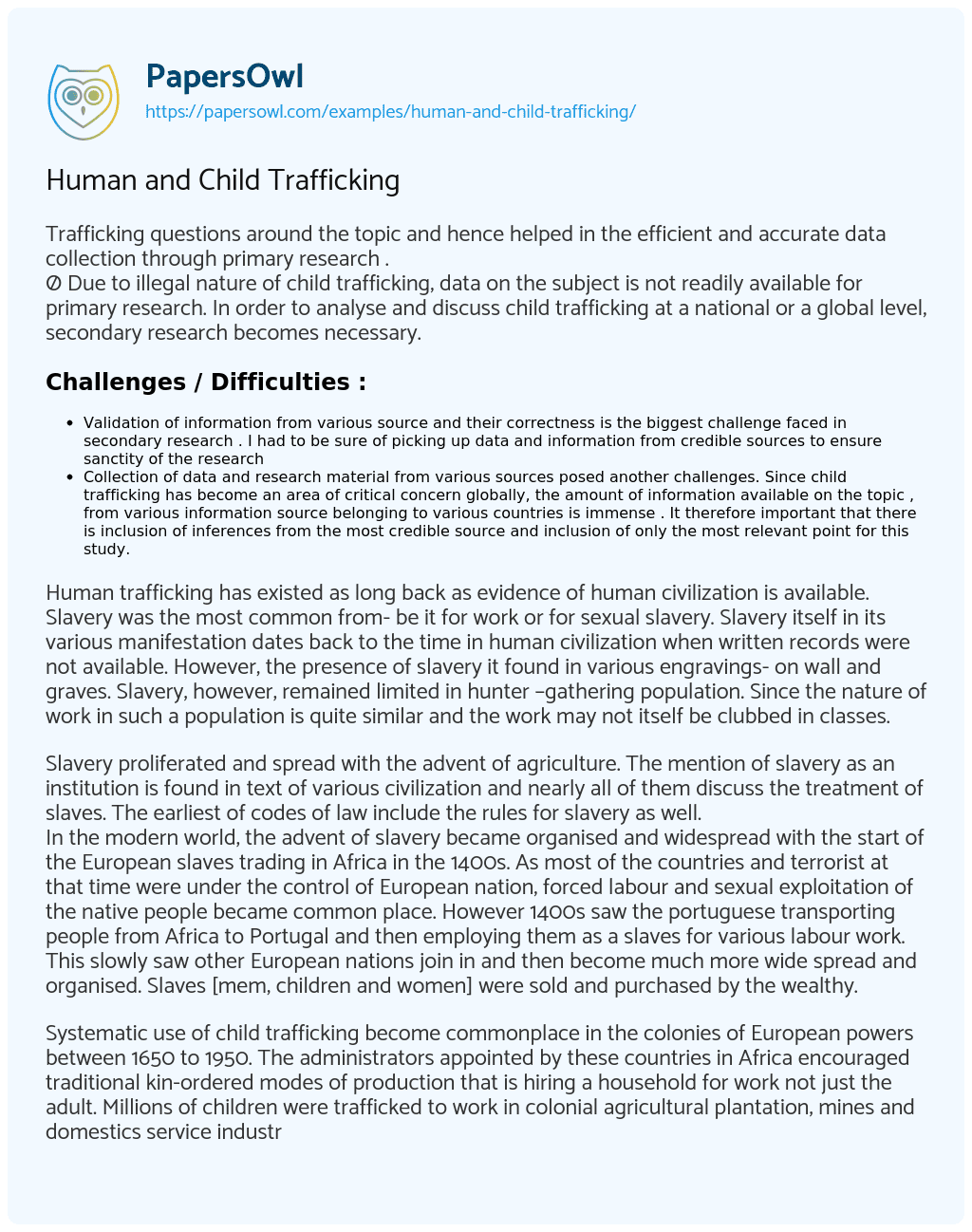 Human trafficking has existed as long back as evidence of human civilization is available. Slavery was the most common from- be it for work or for sexual slavery. Slavery itself in its various manifestation dates back to the time in human civilization when written records were not available. However, the presence of slavery it found in various engravings- on wall and graves. Slavery, however, remained limited in hunter –gathering population. Since the nature of work in such a population is quite similar and the work may not itself be clubbed in classes.

Slavery proliferated and spread with the advent of agriculture. The mention of slavery as an institution is found in text of various civilization and nearly all of them discuss the treatment of slaves. The earliest of codes of law include the rules for slavery as well.
In the modern world, the advent of slavery became organised and widespread with the start of the European slaves trading in Africa in the 1400s. As most of the countries and terrorist at that time were under the control of European nation, forced labour and sexual exploitation of the native people became common place. However 1400s saw the portuguese transporting people from Africa to Portugal and then employing them as a slaves for various labour work. This slowly saw other European nations join in and then become much more wide spread and organised. Slaves [mem, children and women] were sold and purchased by the wealthy.

Systematic use of child trafficking become commonplace in the colonies of European powers between 1650 to 1950. The administrators appointed by these countries in Africa encouraged traditional kin-ordered modes of production that is hiring a household for work not just the adult. Millions of children were trafficked to work in colonial agricultural plantation, mines and domestics service industries. Sophisticated schemes were promulgated where children in these colonies between the age of 5-15 were hired as an apprentice without pay in exchange for learning a crafts .

Child trafficking was brought into predominance with the advent of the industrial revolution. The use of children, sometimes of age as low as 4 years, in production factories, mines and in agriculture amongst other menial jobs become common. Often the use of children in such place was brought about by economic hardships. Children belonging to poor households were expected to contribute to the family’s budget. Parents from improvised households would often sell [intending to sell their services] their children for money. They often worked long hours, even night shifts in dangerous works for lower pays – often just 10-15% of adult men wages.
Many times if the family was in debt and the breadwinner died, the onus would come on the children to be employed as per the wishes of debtor and pay-off the family’s debts. Poor households also saw abandonment of children which obliged them to work for whatever hours stipulated in lieu of dismal pay levels.

It is estimated that 1.7 million children of age 15 and below were employed in American factories by 1900 out of which major chunk were trafficked children forced to work against their wishes.

In 1910 many photographer as well as activist powerfully evoked and displayed the plight of children working in industries. From the advent of the agreement of suppression of “ white slavery “ , slowly any laws and regulation were brought in place to remove slavery including active focus on child labour. After WWI, the league of nations sought to actively pursue solutions for human trafficking. There was active research and data collection to measure the extent of human trafficking and trafficking of all races and all genders was to be treated with the same amount of seriousness. However many of these efforts could not bear fruit. Prisoners of wars were subject to forced labour and sexual trafficking increased, many times with concealed help from the government to manage soldiers fighting long wars and reduced rapes. Post WW II, the formation of United Nation tried to initiate a set of new action in pursuit of abolishing trafficking as well as child labour. While many developed Nations in the following year made child labour illegal and ensured enforcement, many developing and underdeveloped nation either did not completely make child trafficking illegal or in case where laws were passed to make child trafficking illegal. The enforcement remained dismal .