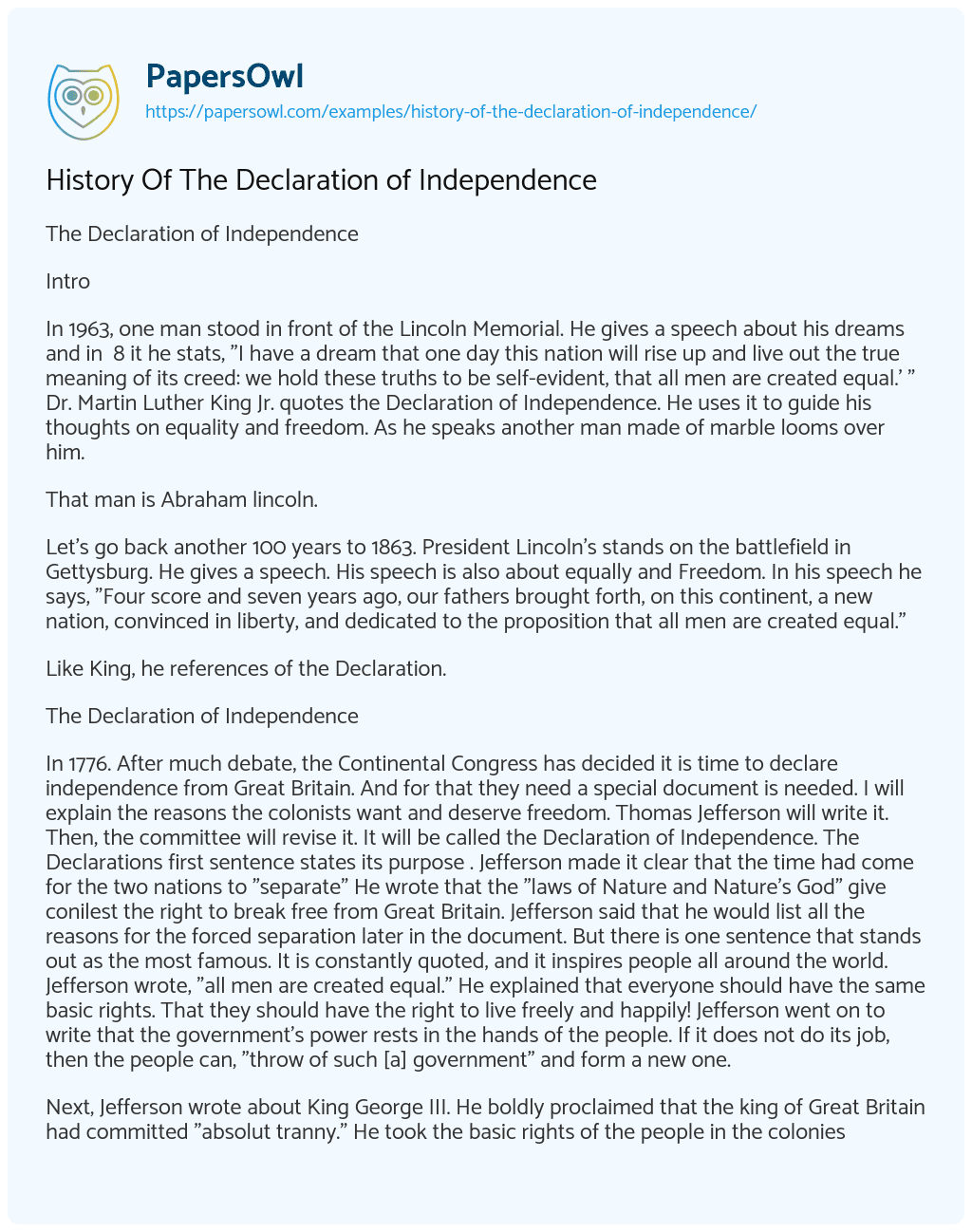 The Declaration of Independence

In 1963, one man stood in front of the Lincoln Memorial. He gives a speech about his dreams and in  8 it he stats, “I have a dream that one day this nation will rise up and live out the true meaning of its creed: we hold these truths to be self-evident, that all men are created equal.’ ” Dr. Martin Luther King Jr. quotes the Declaration of Independence. He uses it to guide his thoughts on equality and freedom. As he speaks another man made of marble looms over him.

That man is Abraham lincoln.

Let’s go back another 100 years to 1863. President Lincoln’s stands on the battlefield in Gettysburg. He gives a speech. His speech is also about equally and Freedom. In his speech he says, “Four score and seven years ago, our fathers brought forth, on this continent, a new nation, convinced in liberty, and dedicated to the proposition that all men are created equal.”

The Declaration of Independence

In 1776. After much debate, the Continental Congress has decided it is time to declare independence from Great Britain. And for that they need a special document is needed. I will explain the reasons the colonists want and deserve freedom. Thomas Jefferson will write it. Then, the committee will revise it. It will be called the Declaration of Independence. The Declarations first sentence states its purpose . Jefferson made it clear that the time had come for the two nations to “separate” He wrote that the “laws of Nature and Nature’s God” give conilest the right to break free from Great Britain. Jefferson said that he would list all the reasons for the forced separation later in the document. But there is one sentence that stands out as the most famous. It is constantly quoted, and it inspires people all around the world. Jefferson wrote, “all men are created equal.” He explained that everyone should have the same basic rights. That they should have the right to live freely and happily! Jefferson went on to write that the government’s power rests in the hands of the people. If it does not do its job, then the people can, “throw of such [a] government” and form a new one.

Next, Jefferson wrote about King George III. He boldly proclaimed that the king of Great Britain had committed “absolut tranny.” He took the basic rights of the people in the colonies

History Of The Declaration of Independence. (2019, Dec 02). Retrieved from https://papersowl.com/examples/history-of-the-declaration-of-independence/

The Declaration of Independence: a History Moment